News & Politics / London’s bridges are symbols of freedom, not fear 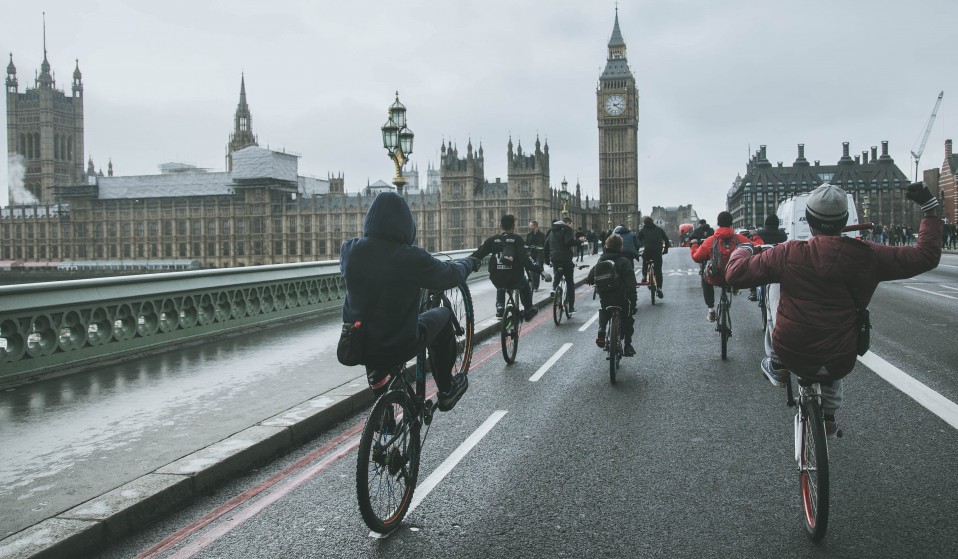 Photojournalist Theo McInnes cycled across London Bridge eight minutes before terror struck. But the sense of gratitude that London's bridges inspire must be cherished and reclaimed.

Photojournalist Theo McInnes cycled across London Bridge last Saturday eight minutes before terror struck. But the sense of gratitude, he reflects, that London's bridges inspire must be cherished and reclaimed.

It was a wet January afternoon when we rolled out over Westminster Bridge, wheels in the air, with a small crew of riders from the Bikelife scene. We rode just behind them, taking notes and trying to capture their boundless energy for a forthcoming story in Huck.  The moment on the bridge captured the spirit of being a kid; their harmless rebellion against traffic laws, that cheeky confidence and feeling of invincibility we were all accustomed to when growing up.

The rain was lashing down as gusts of wind whipped across the water, but even with the elements against us it’s difficult to look back on that moment as anything other than fucking great. As they boasted their youthful optimism crossing that bridge back in January I took the snap above, then remember gazing east over the Thames, towards Waterloo, admiring the city cascading across the grey horizon.

Cycling across a bridge in this city is always an incredible sight; rarely do you get to see everything laid out so bare amongst the tangle of high-rises that nowadays define it. If you cycle in London you’ll know what I mean, that profound feeling of wonderment as you see a section of the city rolled out on both sides.

My daily commute takes me from my home in Kennington up Borough High street and across London Bridge into The City. The crossing itself is pretty unspectacular, especially compared to its more famous neighbour, but as you see the sun rise above the Docklands and later set over Parliament, you’re hit with the profound notion that nothing in this city rivals its magnificence.

Last Saturday was memorably beautiful. I was lucky to cross during the golden hour, moments before sunset, as the clouds of black and grey that filled the sky started to fracture with deep orange cracking through the horizon to the West, towards Parliament. That journey home, that stretch over the bridge, always gives me the same sensation – that overwhelming feeling of, “Fuck, this city is awesome.”

It must have been about 9:50pm as I swept over the bridge, looking West at the warm evening glow lighting up the skyline. I soaked it in, as I always do, and continued down Borough High Street, through Elephant and to my home in Kennington.

I remember thinking back to that moment on Westminster Bridge, when we rode en masse and were consumed with the feeling that anything was possible. Two months after that January morning a man, twisted by hate, took the lives of five people as they took in that same view. Eight minutes after I passed over London Bridge, last Saturday, three men committed a similar evil taking the lives of seven.

Their intention is to force fear into our hearts and leave us scared to negotiate the city we call home. But today the bridge will reopen and today I will make the same crossing I have made almost every day. In the evening I will travel back over it and I will look out over Waterloo, towards Parliament, as I have done hundreds of times before.

I know the sun will never stop setting to the West of that bridge and, as I look out towards the unparalleled skyline, I will find comfort in the fact that, as Londoners, we will never let them win – we will always stand together, united.

Read the full story of the Bikelife movement in Huck 60 – The Outsider Issue. Buy it in the Huck shop or subscribe to make sure you never miss another issue.

Linkedin
RELATED ARTICLES
OTHER ARTICLES
Jeffrey Henson Scales intimate portraits and protest images of the BPP and its leaders offer a rare insight into organisation at a time of societal upheaval.
After fleeing the war in Ukraine, people are finding it impossible to secure affordable and decent housing in the UK.
Taking us through one of the most dynamic years in recent history, Laylah Amatullah Barrayn new photo book contains tender yet confrontational portraits.
David 'Dee' Delgado’s photo project is about honouring and uplifting the city of his youth, and a world rapidly disappearing under the relentless onslaught of gentrification.
From snake handlers to mardi-gras revellers, Tom “TBow” Bowden’s photos provide a snapshot of the wonderful and weird people who make up America.
Activists and campaigners are fighting back against new laws that would seriously undermine the ability to take industrial action, calling it an attack on fundamental workers' rights.