News & Politics / Why do so many girls lie about starting their periods? 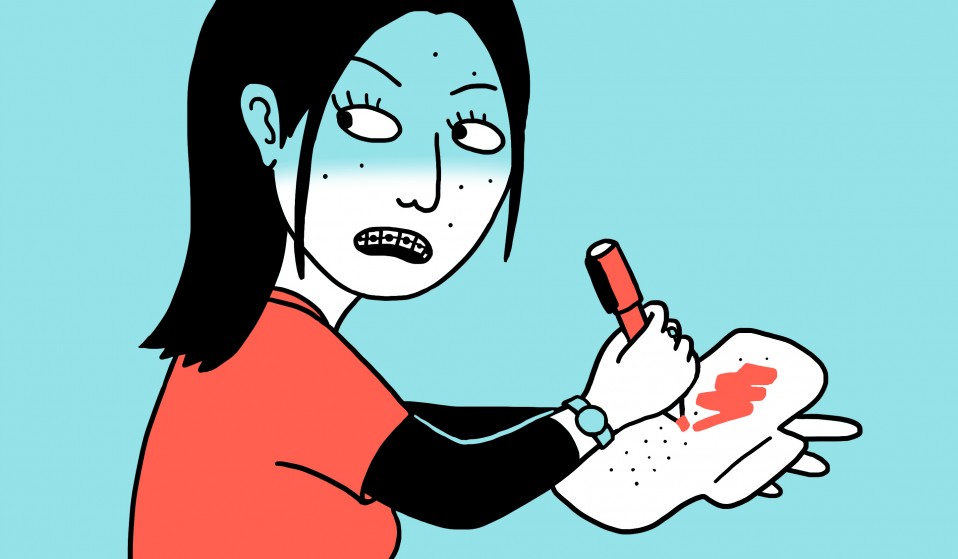 Rachel Grace Almeida takes a look at why so many girls lie about starting their periods, and what this says about the pressures on young women today.

Adolescence is rarely easy. A heady mix of hormones, exams and new experiences make the world a daunting yet exciting place. Pressure to fit in hits like never before, but when it comes to hitting puberty, timing is pretty much out of your control.
Rachel Grace Almeida takes a look at why so many girls lie about starting their periods, and what this says about the pressures on young women today.

I was just 12-years-old the first time I pretended to have my period. I was surrounded by my classmates in the girls locker room getting ready for a PE class when I purposefully knocked over my backpack. A torrent of white tampons fell onto the dark tiled floor in perfect contrast for all to see.

I looked up, desperately waiting for at least one of my classmates to notice what had happened, feigning embarrassment as I scrambled to pick them up in a natural-but-rushed way, trying hard not to blow my cover.

Here began my three-year stint in carrying sanitary products in my bag for literally no reason, asking friends to check my jeans for “leaks” as I winced through non-existent pain.

The thing is, from around age of 10, girls in my school started going through puberty. Soon, everyone around me developed breasts, shot up in height, and started talking about sex. Meanwhile, my sexual development was nowhere to be found. Boys in my school were disgusted by periods, but they were even more disgusted by the girls they couldn’t sexualise.

Since the beginning of time, periods and sex have gone hand in hand – after all, that first one marks your journey into womanhood. And yes, as a young girl I felt the basic anxieties of conforming to fit in with my peers, and sex is definitely a part of that.

But more than this I felt an unrelenting pressure to be a sexual being, ready to be consumed and objectified by the young men and boys around me. Lying about my period wasn’t just an innocent untruth to fit in – it was the precursor to the objectification and scrutiny I would face as a woman throughout my life.

When my period actually arrived, it was disappointingly anticlimactic. I was 15-years-old, and frankly exhausted by the charade. By then, pretty much all the girls around me had been menstruating for years. Instead of talking to my contemporaries about what it felt like, I had a chance to reflect.

The age girls are getting their period post-millennium averages at 12.5 years, making way for the shit storm that is puberty to hit us at the earliest stage since the 1800’s. At the same time, young women today are under immense pressure to adhere to societal expectations of womanhood. It’s a toxic combination.

Unsurprisingly, lying about menstruation is therefore a common occurrence. Growing up is confusing enough as it is, but when your body isn’t cooperating with your brain, it can become incredibly lonely. “In my friendship group, you were respected for having your period. The boys in my school knew who had started and girls wore it like a badge of honour because of the attention it brought,” my friend Josie tells me.

Josie pretended to have her period at the tender age of 13, but didn’t actually start until she was 16. “I used to carry tampons loosely in my bag and wave them proudly. I pretended I had cramps when the other girls did, I pretended to be overly hungry on my period – all the tips I picked up from magazines that I couldn’t relate to yet.”

On top of the pressure she forged on herself, she also recognises now that the unrealistic physical and sexual standards society holds for women played a big part in her lie. “If you started your period you were seen as womanly and more ‘available’ to boys, as it were. There seemed to be a link to having your period and being attractive to boys. If you were a late bloomer, you weren’t seen as sexual, and that meant you didn’t matter as a woman.” 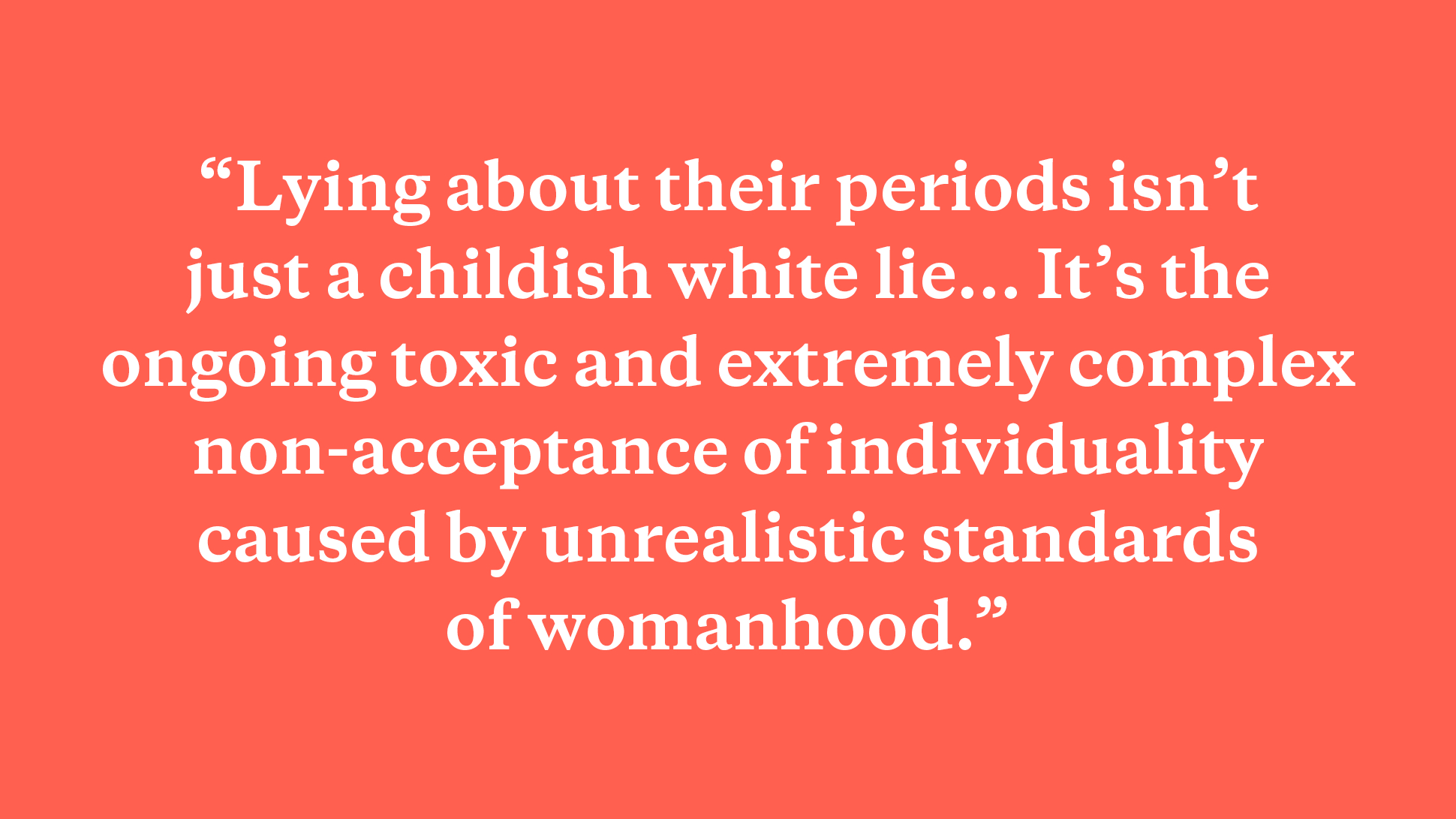 Josie, like me, regrets wishing away her childhood. “I should have just enjoyed being young.”

Societal/self-sabotaging measurements of femininity play a big part in the grapple with adolescence. Emma, another woman who also went to great lengths to lie about her period, argues that there’s a lot of shaming masked as pity when you aren’t as sexually developed as your peers.

“Being viewed as an object worthy of sexual attention was so important – it was essentially the only measure of worth in my school. I was often reminded that I didn’t have that power by boys.” Lying about having started her period was a beacon of her sexuality, and the “privilege” of puberty was seen as a threat; it was her arsenal against being bullied for being a child.

Rachel Taylor – a psychologist in London who specialises in educational environments – also experienced late development, and lied about starting her period as a child. “When my mates had theirs and I was desperate, I had questions like ‘when is it going to happen to me?’ which resulted in creating a façade of maturity,” she reflects.

According to Rachel, an expert in this field, the hyper-sexualisation of women from a young age propels feelings of inadequacy and low self-worth. It’s this, sometimes, that manifests itself in elaborate lies to fit into the box society has carved for us.

“The phenomena of young girls lying about menstruating is about systematic sexism and who holds the real power in our world. Objectified girls are being groomed to accept the passive role of the object, whose main source of power is her appearance and sexual availability.”

Rachel believes that the policing of female sexuality works on both sides of the spectrum – girls get shamed for being overly sexual as much as they do for being under-developed. This interaction leads young girls to feel the impact of sexual maturity before their brain is ready for these changes, sometimes leaving lasting psychological damage.

She’s also quick to argue that girls lying about their periods isn’t just a childish white lie, like saying you’re allowed to stay up past 11pm on school nights: it’s the ongoing toxic and extremely complex non-acceptance of individuality caused by unrealistic standards of womanhood.

The effort of keeping up a lie not only monthly, but also multiple days within that month, begins to pervade your identity. You have to remember to keep pretending, but it’s not the kind of lie that you eventually start to believe yourself; it’s a deep, tiring level of vigilance you have to keep up.

Until we do, the pressures on girls and young women will continue to fuel anxiety, hurt and oppression.

Linkedin
RELATED ARTICLES
OTHER ARTICLES
A centuries-old tradition is offering families a way to honour the deceased, reports Arbab Ali.
Following the release of their third album, the duo talk collaboration, family and connecting with the dead.
After being subject to racism growing up, Kavi Pujara’s photo series allowed him to reconnect with and reimagine his hometown.
Over the weekend, the United Families & Friends Campaign organised a protest calling for an end to deaths at the hands of the police.
A new exhibition brings together 150 works by twelve photographers, offering mesmerising and intimate depictions of life.
The campaigning charity are on a mission to increase inclusion, participation and representation of Black people in trail running.