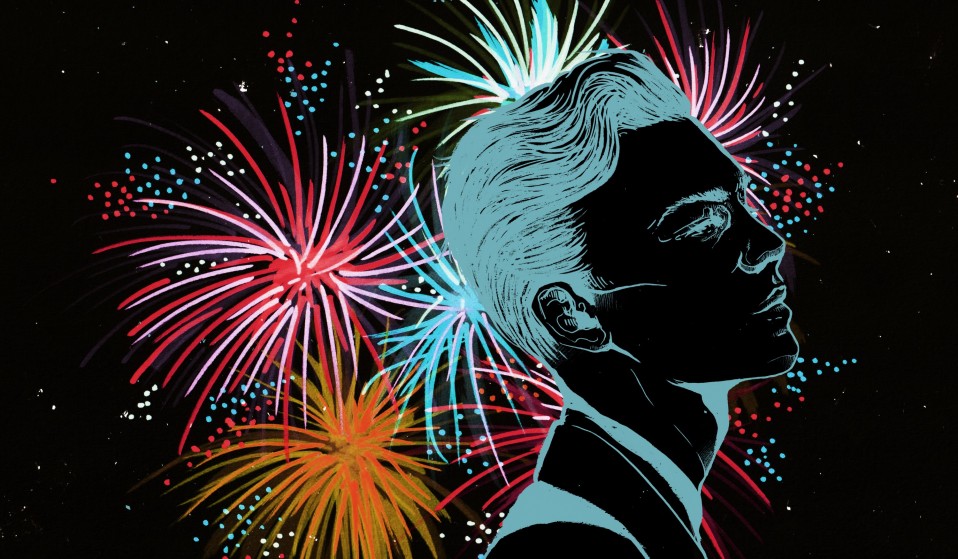 Once you've attempted to take your own life you can't just pretend it didn't happen.

By defiantly commemorating the day he attempted to take his own life, Ben Smoke has a chance to embrace his life while also calling people to action. With LGBTQ young people almost five times more likely to attempt suicide than their heterosexual counterparts there’s no time to waste.

It was during this summer that my Mum told me she mourns me every single day. It was a strange thing to say, given the fact I’m still alive and kicking.

At the time, I was sitting on a bench in the middle of a forest in Cornwall, huddled together with my mum and my sister around a picnic of Dairylea Dunkables and Chewits and chocolate in the August sunshine. We were eating and talking and looking at the scenery.

“You want to be cremated don’t you?” mum asked me. She unpacked a sweet from its wrapper and ate it. I looked up at her and took a minute before I replied. The thing is, this wasn’t the first time we’d had this conversation.

I said yes – she knows this already – and reminded her that if I’m cremated I want my ashes to be split into three.

“What’s the firework thing?” My sister chimed in.

I turned to my sister and explained to her that after I’m cremated I want a third of my ashes to be put into a firework to be set off from the top of Primrose Hill. My sister nodded. My mum looked a bit perturbed, which was strange really, given that she was very much responsible for this line of conversation.

It’s not the firework that gets her though. Despite herself, she actually quite likes that idea, although she’d probably never admit it. My mum is also quite keen on the prospect of another third of my ashes being scattered from the Albert Bridge in Chelsea, just after high tide. It’s the final third of me that may well end up in her possession that worries her the most.

I tried to reassure her once again that, given she is 20 years my senior, it’s much more likely that I’ll have to bury her than she will be left with a pile of my ashes to squeeze into a firework on Primrose Hill. I point out that I’ll probably outlive her. I point out that this really isn’t anything to worry about.

“Of course that’s not true,” my mum replied, without stopping for a breath. “I’ll outlive you. I mourn you every day.”

Later that evening we were on her couch watching telly and chatting. I decided to press her on what she’d said in the forest so nonchalantly just a few hours before, about how she was already grieving for me.

“Ever since that first time, I’ve mourned you each day,” she repeated, turning to look at me. “It’s the way I’m preparing myself for that call. The one where they tell me you’ve died. I know it’s coming, so I’ve started to prepare myself.”

I looked back at her. I thought about the bridge and the locket and the fireworks. I cried a little.

The ‘first time’ she was referring too wasn’t actually my first suicide attempt, but it was the first ‘significant’ one. Now it seems we’ve started to refer to it as the ‘first time’ regardless.

On 26 November 2012, I attempted to take my own life. For everyone’s sake, I’ll spare you most of the details. I wrote a note, which I posted on Facebook. Then I took an overdose and I sat on the couch in my bedroom in Whitechapel, East London, and waited to die. I watched the comments pile up on the note. I watched my phone buzz itself into a frenzy until the battery dwindled, calls and texts pleading with me to stop. I watched my housemates rush in, the paramedics behind them. I watched their faces and their hands and their fluorescent jackets and their tears. I watched the stairs of the block as we twisted our way down to the ambulance.

I watched it all unfold in front of me. Then I watched them try to fold me back together. Unfortunately, though, things that are unfolded rarely go back together in the same way. It’s hard to iron out those creases.

Someone once asked me what I was thinking as I posted that note on Facebook the ‘first time’. I think they wanted me to share some profound reflections on life. This was the grand exit; the big one. They wanted to understand the clarity of thought that might have descended on my mind.

The thing I remembered thinking was: “Why is One Direction playing from my laptop?”

I was done. Clocked out. Numb, empty and exhausted. I was over it. I’m not sure that’s quite the answer they were expecting. My experience of suicide has never been one concurrent with overwhelming onslaughts of emotion, pain or suffering. For me, getting to the place where I plan it – where I think about dates and times and methods – is all about acceptance.

It’s a feeling of succumbing and finally being subsumed by the waves that I’ve been fighting to tread water in for too long. And with that comes a coldness towards life, a disengagement. A realisation of the inevitability of what will soon transpire. It’s acceptance.

It’s never until after the attempt that the full weight of what has happened – of what I attempted – really hits me. On some occasions, it takes just a few minutes. On others days, weeks, even months have passed by.

For other people in my life, for people like my mum, the gravity of these actions hit immediately. For them, there’s no acceptance and switching off and succumbing. For them, there is just sadness and pain. An experience to be played over and over. I guess it’s a daily ritual of mourning played out until the day when I’m finally unfolded too far.

If I’m truly honest with myself – my mum is probably right to be worried.

There is a mental health epidemic in our community, and it marks us all. Suicide arguably more than any. It changes us. Our friends. Our families. Our loved ones. They are marks that we all bear, collectively – and that is why, each year, on the anniversary of that ‘first time’, I mark my suicide attempt.

It started in 2013, in the Wetherspoons on Charing Cross Road with a few friends and a couple of drinks. The next year we moved to the Coach and Horses of Greek Street with a meal. The next year I hosted a party at my flat with a few friends and we drank whiskey and rum and beer and Disaronno far too late into the night. In the fourth year, I had a whole day of events, followed by a party that rumbled on and on long into the following morning.

Each of these days, the events or celebrations have concurrently been some of the most warming and painful of my life. This year, five years on, I have a whole weekend of activities planned, culminating in an all-day event on the subject of LGBTQ+ mental health to raise money for the Outside Project.

Each year, the anniversary gets contemporaneously easier and harder to navigate. Each year I move further and further away from that Whitechapel flat and those marks fade, but their influence seems to only get stronger.

When I think about it I feel sadness. I feel confusion. Increasingly, I feel an affinity with that desperation too. I worry that maybe, without realising it, I’ve also been mourning myself every day. That the way that I’ve lived, planned and thought about my life has been as one with a short expiry date. As one waiting to be taken. I’m working on fixing that.

On Saturday 26 November 2017 I’ll cross the tally on the five years that have passed since that night, and I do so not knowing whether I’ll make it to the next one. As LGBTQ+ people, we all mourn ourselves and each other every single day. But in turn, we also celebrate each other, love each other, respect, enjoy and adore each other. After all, isn’t that what mourning should be about?

If you wish to join the celebrations, head  to Her Upstairs in Camden from 5pm on Sunday 26 November 2017.

Linkedin
RELATED ARTICLES
OTHER ARTICLES
After blocking the Scottish government’s gender recognition reform bill, Westminster is now devising further changes to the law to make it harder for trans people to self-identify.
Photographer Sean Maung reflects on documenting a small town in Pennsylvania afflicted by high levels of unemployment, poverty, violence, crime, and addiction.
After building his reputation covering the US civil rights movement in the 1960s, the photographer went on to produce some of the most enduring images of the past century.
AI companies that develop image-generators using copyrighted artwork from the internet are coming under fire from artists who say that it amounts to theft.
As she gears up for the release of her first book, the 24-year-old climate activist talks standing up to authority and building a more inclusive movement.
A new podcast is opening up the conversation between trans women and trans amorous men in the hope of building coalitions.