News & Politics / My Month With Trump: He came in like a wrecking ball 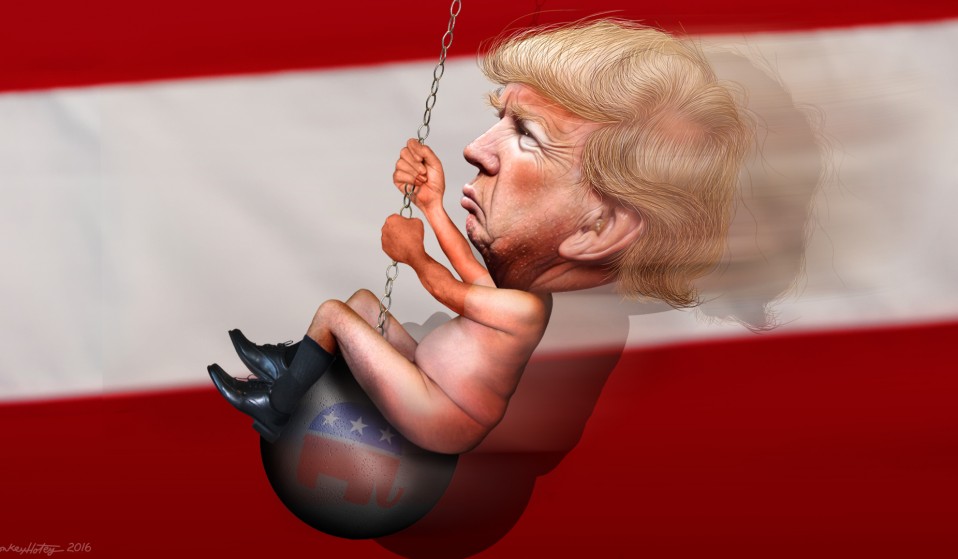 It's happened. Donald Trump is President of the United States. What lies ahead is still unknown, but throughout this Presidency Huck will be keeping track by dropping in on real people, not stats. In our new series, My Month With Trump, guest writers explain the impact this new administration is having on their lives. First up is Mary Numair: a humorist, feminist and writer from Portland, Oregon, who can't take stop staring at the car crash that is the new President's Twitter account.

A month ago was mid-December. My nephew was just about to turn 13. It’s just the two of us; I have full-time custody of him. I’m a 30-year-old, poor, single-parent who lives smack-dab in the middle of a liberal city in a country that has just elected a right-wing, insecure, money-obsessed, orange bigot. Nothing has made sense since 8 November, to be frank.

These last few weeks with Trump have added to my already mounting fears, doubts and worries. Our President Elect is filling his cabinet with racists and billionaires, mostly both. The depths of how under-qualified some of these candidates are is unprecedented (or unpresidented, if you will). But still, we have a sizeable portion of the country that is eager to see our new Commander in Chief take charge.

Non-Trump supporters have understandably been less enthusiastic. I’d even go far as to say many of us have been working through the 5 stages of grief:

I figure that I’m somewhere in that sweet spot between the Depression and the Acceptance stages.

To say we are a nation divided is an understatement. We are a nation at each other’s throats. You can feel it when you go to the store or grab a cup of coffee, or better yet, consult the internet for people’s opinions. Some people have become so extreme that debating an issue is like throwing two cats into a bathtub full of liberal tears. Why tears? I don’t know, that just seems to be the favourite insult from either side.

The name calling across sides won’t stop. Trump supporters feel like they shouldn’t be labeled “racists” solely because they supported a racist via their vote. While many on the left-side are fielding insults like “snowflake” and “libtard.”

The last month has brought to us daily scandals. We wake up to breaking-Donald-news so often that I’m not sure if anyone feels shocked by anything anymore. Let’s see: we’ve had the Russian hacking scandal, that Russian-pee scandal, PEOTUS being accused of sexual assault, that whole attempting to silence/discredit the media thing, and oh yeah, of course, the Trump Tweets. Lord almighty, the Trump Tweets. Our future leader fires off bitter 3:00am tweets like a scorned ex.

We’ve learned by now that anyone who dare criticise or question Trump will be subject to his sloppy, petty, 140 characters of fury. When Meryl Streep used her lifetime achievement platform at the Golden Globes to address Trump’s behaviour, many of us immediately checked his Twitter account knowing it would only be a matter of time before he sent off some eye-roll inducing nonsense. And he delivered. Apparently he finds Ms. Streep, one of the most award nominated actors of all time, “overrated.”

His online behaviour is so bizarre and childish that we now have people tossing around conspiracies about the tweets. Are they sincere? Are they a distraction? Are we the pawns, wilfully playing into his little game? Truthfully, I think his tweets are real. He’s a man way in over his head, with a fuse shorter than his tiny little baby fingers.

But of all the confusing and appalling things to happen this last month, one incident has hit me on a more personal level. Have you ever done that thing where you stopped to snap a photo, tweeted the photo and then had the photo go viral? Well, yeah, I did that just days ago.

Earlier this week I was at the mall with my best friend and my nephew. We happened upon a display at Spencer’s. (Spencer’s is a novelty gift shop that carries cheap vibrators and poop emoji water bottles. It is hardly the gold standard in classy gift giving). This display we saw was a collection of pro-Trump shirts, with one shirt displaying the message “Grab America By The Pussy.” It’s a reference to the now infamous audio clip of Donald Trump bragging to Billy Bush about how celebrities can get away with anything, even non-consensual genital grabbing.

In case anyone still needed a reason to never walk into a @Spencers again, this is proudly being displayed in the front of their PDX store. pic.twitter.com/jalMio7i9P

The three of us were pretty upset by the shirt, so I took a photo and posted it to my social media. Boy oh boy did that photo catch fire. By the next day, the photo had gone viral. Soon after the photo made its rounds, my inbox became a war zone of “thank you for speaking up” vs “you dumb whore, I hope you die sad and alone.” I’m no stranger to abuse, my pro-choice counter-protest outside a Planned Parenthood clinic saw similar abuse thrown my way, simply for yelling “yeast infection” down a mic.

This argument seemingly has no end in sight. It’s been picked up by dozens of news agencies. As of now, Spencer’s claims the shirts are satire and will be keeping them up for sale. My local mall, however, has demanded that the shirt will not be sold in on its premises. Trump supporters are furious over the “censorship”, while other people are outraged over the profiting off comments made about sexual assault.

As I write this, Trump is literally moving in to the White House. The reality still hasn’t sunk in. A few days ago I saw a tweet from Michelle Obama portraying her last few days in the White House and began to cry. What the fuck has our country done to itself?

There’s a surreal and haunting moment when you get into a car accident. It happens in the milliseconds just before the collision. You suck in all the air around you while you brace yourself for impact. You know you’re going to get hurt, you know your car will be damaged. All you can do is hold your breath, close your eyes and hope it won’t be too bad. My month with Trump has been a never ending sequence of those milliseconds.

Linkedin
RELATED ARTICLES
OTHER ARTICLES
Theo McInnes’s photos of the annual event provide an intriguing snapshot of contemporary Britain.
Since 2007, Gideon Mendel has made 20 trips to document floods in 13 countries. The result is an alarming record of what has already been lost to the climate emergency.
As she gears up for the release of her first book, the 24-year-old climate activist talks standing up to authority and building a more inclusive movement.
A recent High Court ruling against the right to wild camp in Dartmoor National Park sparked the largest land protest in history – and campaigners say their fight is not over yet.
AI companies that develop image-generators using copyrighted artwork from the internet are coming under fire from artists who say that it amounts to theft.
Filmmaker Laura Poitras discusses her new documentary which traces the remarkable life of the artist-activist and the impact of her battle against the US opioid crisis.