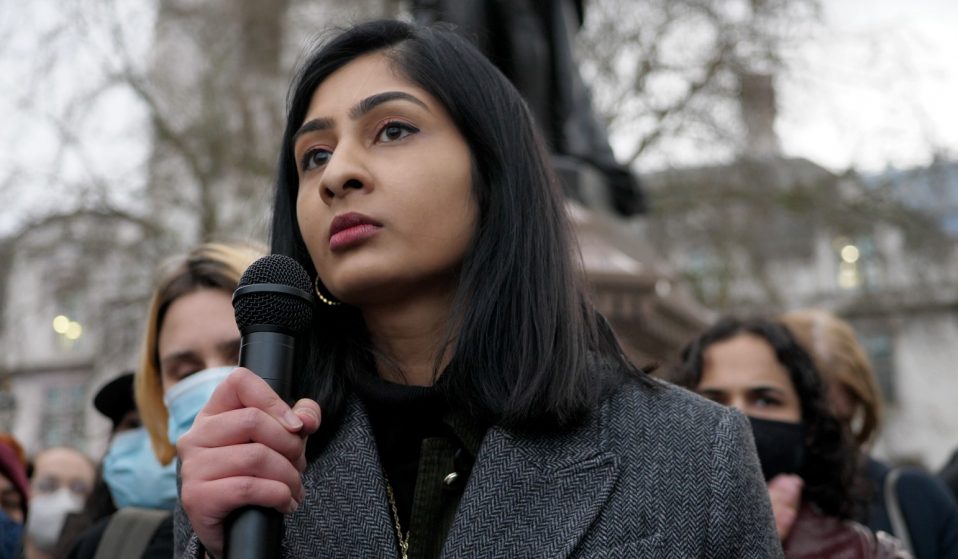 Last weekend, protests in Bristol were met with horrifying levels of police brutality. These scenes should galvanise people in defending their fundamental right to protest, writes the MP for Coventry South.

Last weekend, demonstrations in Bristol were met with horrifying levels of police brutality. These scenes should galvanise people in defending their fundamental right to protest, writes the MP for Coventry South.

On 18 June, 1984, striking miners assembled outside a coking plant in South Yorkshire. Three months into the Miners’ Strike, and the men were determined to defend their jobs, their communities, and their class. They were picketing the plant, seeking to dissuade scab lorries from undermining the strike.

But Thatcher and the Conservative government had other plans. Deploying 6,000 police officers from forces across the country, paramilitary policing tactics came crashing down on the workers.

Dubbed “the Battle of Orgreave”, it was closer to a police riot. Mounted police charged the miners, with truncheons raining down as workers ran to safety. Armed with riot shields, the police hospitalised scores of miners. Bones broken, skulls fractured, and terrified by police brutality, the workers were given a lesson in what it meant to be Thatcher’s “enemy within”. Some never recovered from the assault.

But this isn’t how the media portrayed it. Instead, the miners were depicted as instigators of violence, with the police simply acting in self-defence. On the evening news, the BBC showed footage of the scenes out of order, making it seem as if the miners started the violence.

While Conservative politicians salivated at punishing the “violent thugs”, the case against arrested miners collapsed. It was abandoned by the prosecution when police evidence was found to be “unreliable”, including forgeries and identical statements. Michael Mansfield QC described it as “the worst example of a mass frame-up in this country this century”.

This dynamic – police wrongdoing and then establishment attempts to hide it in the interests of ruling powers – is not unique to Orgreave. Far from it. Notable examples abound, from Hillsborough – where 96 Liverpool fans were unlawfully killed due to police gross negligence, as a 2016 inquest ruled, even as The Sun claimed the fans were at fault – to the Mangrove Nine – where protesting Black activists were met with police violence, only for the subsequent trial to clear the activists of inciting a riot and instead find the Metropolitan Police guilty of racism.

This history should disabuse anyone of the presumption that protesters are always guilty and the police always benign. And it is this vital lesson that is necessary to make sense of what happened in Bristol on the weekend.

For the third time in a week, on Friday, protesters took to the city’s streets, demonstrating their opposition to the Conservatives’ Police, Crime, Sentencing and Courts Bill, a draconian piece of legislation that gives the police powers to outlaw protests deemed a “nuisance” or that are too “noisy”, as well as attacking the rights of Gypsy, Roma and Traveller communities, expanding stop-and-search powers and extending sentences for defacing statues to 10 years.

In Bristol’s city centre, around a thousand protesters gathered. They held their hands aloft, making their intentions clear. But, it seems, Avon and Somerset Police had other plans.

the aggression on the street is unrelenting pic.twitter.com/n5JZK3Y9gz

They came armed with riot shields and truncheons; officers mounted, ready to charge. Video footage shows police officers using their shields as weapons to beat down on sitting protesters; another shows a man lying prone on the floor, holding his head while an officer hits him with a truncheon; in one, a woman is knocked off her feet with a riot shield blow to the head. The aggression wasn’t just targeted at protesters. A recording from a Daily Mirror journalist shows police officers assault him, hitting him with a baton as he pleads his journalist credentials.

Eyewitness reports and the city’s local media make clear who started the violence. As the Bristol Post reported, “Officers dispersed the crowds by force, initially with riot police pushing and hitting protestors with their shields, and then using mounted police charges, police dogs and officers with batons to scatter the protesters and force them back.”

But this isn’t how it was reported in the national media. Instead, on Saturday, the country woke to statements from the Prime Minister and Home Secretary, portraying protesters as the sole guilty perpetrators of violence. These framed the stories from the BBC and others, who used the police lines without question, unperturbed by the unreliability of their false claim just days earlier that officers had suffered broken bones and punctured lungs.

The picture was again set: violent, thuggish protesters, acting without cause or reason, attacked the police, upon whom no fault lay. This is a dangerous, deeply illiberal framework.

An old, simple and sound liberal principle says that you should hold the state to higher standards than the people. It acts, after all, in our name and – supposedly – at our behest. But that is not a principle that the establishment shows any adherence to. Quite the reverse. In their eyes, the repressive state apparatus is always benign, the masses always suspect.

The events on Friday night show the police already wield excessive power against the people. Handing them more power is a recipe for repression. And there is an even more sinister side to it.

In the months and years ahead, we can anticipate grossly unjust and unpopular Conservative policies. The fallout from the pandemic and the growing destabilising effects of the climate crisis will see to that. The Conservatives foresee it too. The Police Crackdown Bill is aimed to weaken our power to resist it.

The Conservatives tried to rush it through Parliament. A bill standardly faces weeks of public scrutiny before being voted on by MPs. They gave it just six days for this Bill. But protests led by Sisters Uncut unnerved the Government and delayed its passage. It will be voted on by MPs again, but now we have longer to prepare.

Throughout our history we see that there is power in the streets. It’s precisely because of that power that the Conservatives want to pass this Bill. If we are going to kill it, we will need to mobilise that power – protesting loudly, defiantly – and building the opposition that can defeat it. It won’t be easy, but it’s not called the struggle for nothing.

Linkedin
RELATED ARTICLES
OTHER ARTICLES
Cindy Campbell recounts how her brother ushered in a new era of musical culture at a party she held in the Bronx in ‘70s.
By turning a real-life crisis into daytime television fodder, TV bosses have once again shown themselves to be completely out of touch with audiences.
Rogue landlords are exploiting young and inexperienced renters and leaving them in mental and financial turmoil, reports Niall Hignett.
Birdy Chu reflects on documenting the historic moment in which the territory was formally passed back from the UK to China.
In his 2008 series, the photographer pictured himself as Angela Davis, Martin Luther King Jr., Malcolm X, and other prominent figures.
A group of young Palestinians have found temporary freedom in the act of parkour, reimagining wreckage and ruins as a series of high-octane playgrounds.