News & Politics / Divided by the #MuslimBan: For my family this is nothing new 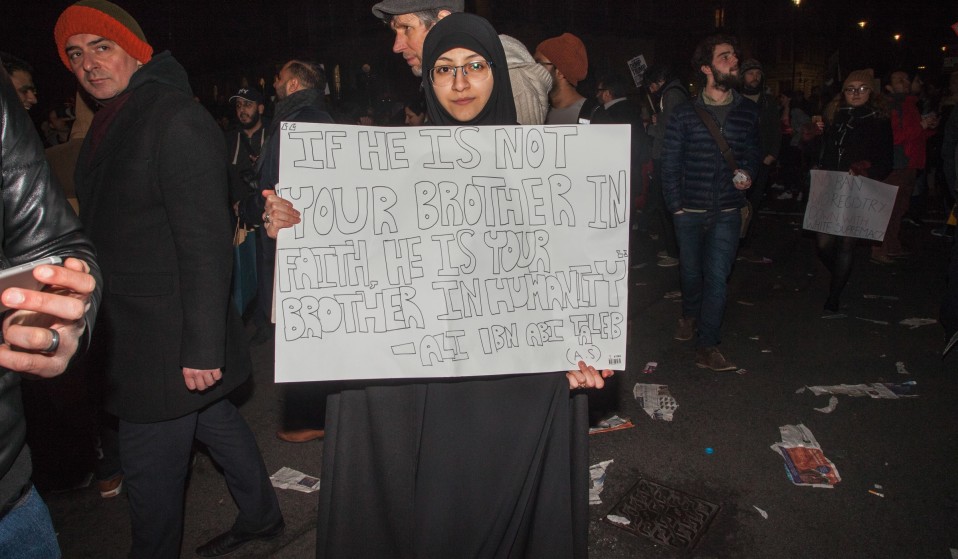 Mostafa Rajaai's family are being kept apart by the Muslim travel ban, but he argues the rest of us have sat and watched Islamophobia and prejudice rage on in silence.

Mostafa Rajaai's family are being kept apart by the Muslim travel ban, but he argues the rest of us have for so long sat and watched Islamophobia and prejudice rage on in silence.

It’s been over seven years since my uncle, who happens to be my closest friend, moved to the United States. Born in Tehran, and a student at the Sharif University of Technology, he was offered a fully-funded scholarship to study in the United States. In 2009 he made his way to Seattle.

Before Trump’s new Islamophobic policies were implemented, navigating the U.S. approach to border control was hardly a walk in the park. With so many restrictions, risks, and regulations, my uncle has only once ventured back to Iran since landing in the land of the free.

But we are family, and many of us miss him dearly and are desperate to see him. My parents moved to Toronto in Canada back in 2012, both Iranian nationals, and hoped that in doing so they might get to see my uncle. Both holding Iranian passports, they applied for visas to visit the U.S., my sister and her husband applied for the same visa from the Netherlands where they live.

Two months passed, no communication came from the American government. Then, just two days before the Muslim Ban executive order came from the Trump administration, their visas were granted. For 48 hours a reunion looked possible, but so quickly it was pulled away from us all.

Watching the ban materialise before my eyes, a ban that hits me, my family, my fellow Iranians and the citizens of six other countries, it felt like a dagger in my heart. Not because I have always dreamt of visiting the states, but because the only way to be reunited with my uncle is to get through that dehumanising border control system. Now even that seems impossible.

I, however, am not even that concerned about my own situation, but that of my grandparents. My elderly grandfather has been living in despair, hoping to see his youngest child. Given his medical condition, it’s taken years for him to be cleared by doctors to take the long journey to visit America. It was heartbreaking to witness the distress this order has caused him. As we spoke on the phone, he in Iran, I could hear his voice breaking under the uncertainty of not knowing whether he would ever be able to see his son again.

My family feels torn by borders, regulations and limitations over which we have no control.

Just a few months ago I was telling my uncle that he shouldn’t worry, that this divisive, hateful parody of a reality TV star would never president of the United States. I was mistaken.

This travel ban, in all its hateful irony, is at least an inclusive one. It not only discriminates against nationals of the seven bizarrely chosen countries, but it has also made the future of many dual nationals as uncertain. The scope of its destructiveness dawned on me when a British Iranian friend of mine, currently a student in New York, told me she’d been left with no choice but to cancel her plans to visit her home in London, unsure whether she’d be let back in at the American border upon her return.

She told me how so many of her friends are in a similar situation, in fear leaving the U.S. to visit loved ones.

When in February 2015 I was elected as the International Students Office for the UK National Union of Students, I already knew what it felt like to live in a country where those seen as outsiders are treated like second class citizens by the state; I’m a brown person living in Britain.

But now everyday I see how awfully the students I represent are treated, and those not in education too, and I often feel hopeless. Whether it was Theresa May wrongly targeting 48,000 international students, or locking us up in indefinite detention, the cruel way we are treated is truly hateful.

When the UK, a country many of us see as home, is so quick to be complicit in Trump’s Muslim ban by inviting him on a state visit, how can we be sure the same thing is not going to happen to us here?

We have seen placards waved all over the world asserting that Trump will not be allowed to ‘come for the Muslims’, but we all know that Muslims have been coming under attack on both sides of the Atlantic for many, many years. Perhaps though, never so openly.

There’s no point in pretending that wider society, including many now so outraged by Trump, have been vigilant, or stood in solidarity with the most marginalised when branded as the source of all evil. There’s no point pretending that something so much earlier could have been done. All I hope is that Trump’s outrageous attacks on migrants, refugees and Muslims might be a wake up call to the world, so you all see what has for so long been happening.

Mostafa Rajaai is the International Students officer at the National Union of Students in the UK.

Linkedin
RELATED ARTICLES
OTHER ARTICLES
Activists and campaigners are fighting back against new laws that would seriously undermine the ability to take industrial action, calling it an attack on fundamental workers' rights.
A recent High Court ruling against the right to wild camp in Dartmoor National Park sparked the largest land protest in history – and campaigners say their fight is not over yet.
Social prescribing connects people with non-medical support to improve their health and wellbeing – but some experts worry it’s just a stick plaster solution.
AI companies that develop image-generators using copyrighted artwork from the internet are coming under fire from artists who say that it amounts to theft.
The action took place in response to the 200 asylum-seeking children who were placed in hotels run by the Home Office who have gone missing.
At his West Bank restaurant, Fadi Kattan established himself as the voice of modern Palestinian cuisine. Now, he’s bringing his innovative, bold flavours to the UK’s capital.