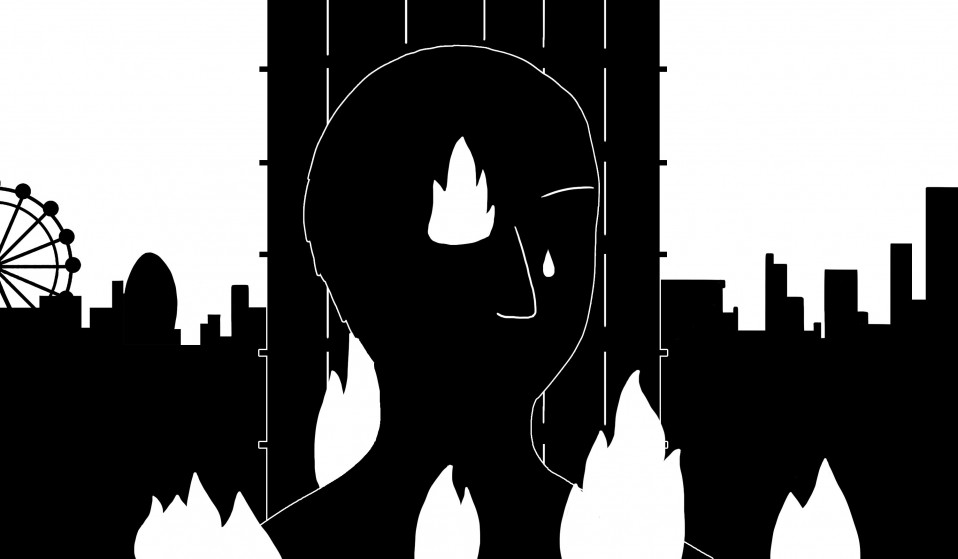 Cult writer Naomi Klein has been debunking neoliberalism's gilded promise since the 1990s. Grenfell Tower, she says, is yet another tragic reminder that beyond the golden surface lies a rotten core.

Cult writer Naomi Klein has been debunking neoliberalism's gilded promise since the 1990s. Grenfell Tower, she says, is yet another tragic reminder that beyond the golden surface lies a rotten core.

When Naomi Klein landed in London last week, she headed straight to a familiar site. The celebrated writer – who fired shots at ‘brand bullies’ in 1999’s No Logo, and has been cutting through the jargon of neoliberalism ever since – made her way to Kensington: home of Royals and Russian oligarchs, wealthiest constituency in the UK, and site of a tragedy that could only have happened in a city that hides inequality in plain sight.

At the foot of Grenfell Tower, charred mass overhead, Klein found a community creating their own coping mechanisms in a borough that has abjectly failed them. On June 14, the public housing block was engulfed by a devastating blaze after a fire broke out in a fourth floor flat and was funnelled upwards by flammable outer-cladding. Reports hold that 80 people died that night. But survivors are demanding a more accurate death toll, claiming it could be twice as high.

While the community waits in limbo, they are running on instinct, coalescing to offer one another support and taking the investigation into their own hands in a vacuum left by the state.

It wasn’t the first time Klein had witnessed such scenes. In 2005, she was on the ground in New Orleans following Hurricane Katrina, documenting the intense militarisation of a city that had been flooded and was calling for help, not an armed response. Poor black people were overwhelmingly affected by a disaster that could have been prevented if levees had held; if austerity hadn’t worn away the basic infrastructure that people were told would be there to protect them.

In the UK, like New Orleans, the Grenfell fire has ignited a torrent of critical questions: How did this happen in a city of great wealth? Where was the state when people needed help? And why aren’t answers being offered in the open: why the need for closed doors?

As Klein walked around Grenfell, she was hit by a bigger question. “Why does it take something like this to bring us together,” were the words of one 10-year-old girl, scrawled on a wall of messages that have sprung up as a spontaneous act of catharsis, part-tribute, part-group therapy.

It’s this moment that Klein reflects on at the Royal Festival Hall, in London’s Southbank Centre, in front of an audience of 2,000-plus. She’s here to talk about her new book, No Is Not Enough: Resisting Trump’s Politics and Winning the World We Need. It’s an alarm bell for the future and the here and now: a wake-up call for anyone who is ready to resist – but has forgotten how to ignite the utopian imagination or dream big enough to offer an alternative ‘Yes!’.

Quoting democratic socialist Cornel West, who said that “justice is what love looks like in public,” Naomi led the audience through her own thoughts: “I often think that neoliberalism is what lovelessness look as policy,” she said and also writes in the book, 300-pages rushed out in five months because time is of the essence. “It looks like the rat-infested schools of Detroit. It looks like water pipes leaking lead and poisoning minds in Flint. It looks like foreclosed homes that were built to collapse…. It is much like Trump himself, greed and carelessness incarnate.”

But it was her words on Grenfell that resonated hardest, and were met with sad applause:

“Lovelessness in public also looks like the charred remains of Grenfell Tower. Every decision that contributed to that epic crime was rounded in a brutal calculus that systematically discounted the lives of poor people, overwhelmingly people of colour. The decision to save money on flammable cladding. The decision not to install sprinklers, not to fix the alarm systems or fire doors, or the decision to cut the number of firefighters. And to do all of this in a city absolutely coursing with private wealth – this is lovelessness in public.

“And as you know this city is filled with other firetrap public housing estates that are surrounded with gleaming half-empty towers – those shiny boxes in the sky that are in large part about parking untaxed income made from speculative finance in full confidence that the value of that shiny box will keep increasing year after year, nevermind what it means to millions of people who are denied their human right to safe and affordable housing.

“It is worth noting that putting his name on shiny half-empty towers like that is Donald Trump’s line of business. He entered the global high-end real estate market at a time when an unprecedented amount of untaxed private wealth was swashing around looking for safe places to park. According to Tax Justice Network, in 2015 the estimated private financial wealth of individuals stashed unrecorded in tax payments around the world was somewhere between $24 -36 trillion. Trump’s gilded condo towers, with their splashy aesthetics, pitched to newly minted oligarchs from Moscow to Colombia fit the bill perfectly.

“But back to Grenfell. It strikes me that there is something just so telling about the flammable cladding, about the decision to invest in surfaces over substance, in the exterior, the outward-facing rather than the interior. Something that speaks to the crisis of values, of morality, that is central to the crisis of our time.

“We live in countries that hire armies to watch us in our daily lives, to monitor emails and text messages and online shopping, peering at us from street cameras and gatekeeping phone cameras – collecting, collating, facially recognising. Yet this panopticon state, all seeing and all knowing, cannot see the most glaring of human needs – for shelter, for safety, for healthcare, for clean water and clean air. Nor can it apparently perform the most basic tasks of care. It can’t fix broken fire alarms, it cannot figure out how to help people whose homes have burned down on their watch.

“Choices are being made – about what to see, about what to watch, about what not to see, and what to studiously ignore. I cannot help feeling that the cladding was part of this. Yes, perhaps it was about insulation and energy savings, as they say, but we know it was also about aesthetics. For the people on the outside, worried about their property values. A kind of party dress on death trap. No, a party dress as a death trap. A kind of disguise. And it’s part of a culture that is all about pretty packaging, much of it cheap and disposable, never mind the cost to people or the planet.

“And this has something in common with Trump too, that hollowest of men. In the book, I do call him an Igor of all things fake. Fake body parts, fake reality-TV, fake news and his whole fake business – and of course, lots of fake gold.

“It’s all on the surface, hiding the desperate rot at the core. He runs the country just as he ran his business, it’s the never-ending Trump Show, constantly looking for opportunities to tweet, to gasp at the latest palace drama while his country is further looted, further privatised, further hollowed out. It’s all shiny surfaces, but don’t set a match anywhere near it because the whole thing is rigged to blow.”

No Is Not Enough: Resisting Trump’s Politics and Winning the World We Need is out now published by Allen Lane.

Read our interview with Naomi Klein in the forthcoming issue of Huck (Aug/Sept).

Linkedin
RELATED ARTICLES
OTHER ARTICLES
David 'Dee' Delgado’s photo project is about honouring and uplifting the city of his youth, and a world rapidly disappearing under the relentless onslaught of gentrification.
A new film from Berghaus traces the story of Adam Raja, who left behind a turbulent upbringing to discover the healing power of climbing.
A recent High Court ruling against the right to wild camp in Dartmoor National Park sparked the largest land protest in history – and campaigners say their fight is not over yet.
At his West Bank restaurant, Fadi Kattan established himself as the voice of modern Palestinian cuisine. Now, he’s bringing his innovative, bold flavours to the UK’s capital.
As she gears up for the release of her first book, the 24-year-old climate activist talks standing up to authority and building a more inclusive movement.
A new podcast is opening up the conversation between trans women and trans amorous men in the hope of building coalitions.