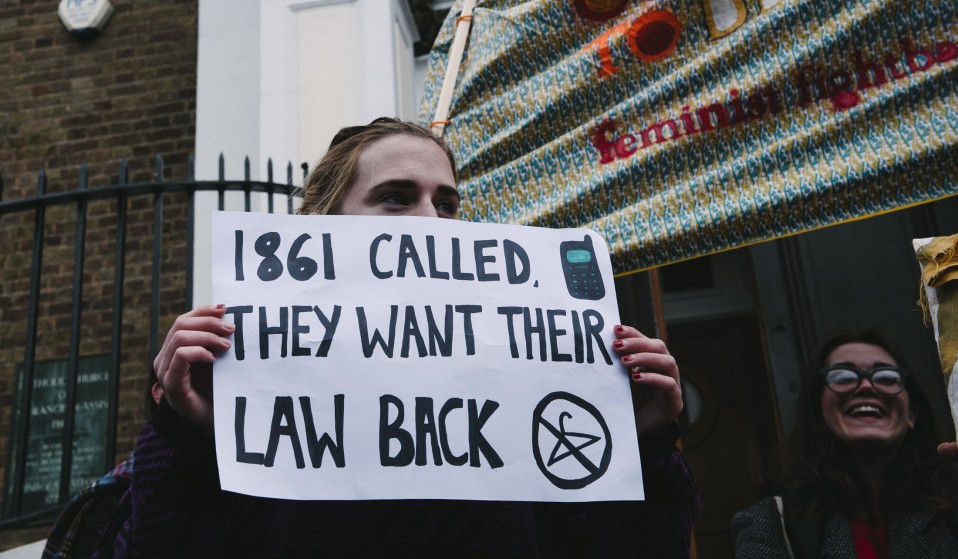 When women face imprisonment over their right to choose, those who can't afford abortions are turning to drastic measures. Huck speaks to Mara Clarke of Abortion Support Network about helping women receive legal abortions in England and why class plays such a huge role in the debate.

“I drank bleach. I took three packs of birth control pills with a bottle of vodka. I threw myself down a flight of stairs. I’ve been trying to figure out how to crash my car but not permanently injure myself or die.”

When you can’t afford to travel to England for a legal abortion, these are some of the measures women in Northern Ireland will put themselves through to terminate a pregnancy, Mara Clarke of Abortion Support Network (ASN) tells me. In Northern Ireland, and in 25 per cent of the world, such as in Chile, the Philippines and Malta, abortion is illegal.

Exempt from the Abortion Act 1967, which made abortion legal in England, Wales and Scotland, in Northern Ireland women are only permitted legal abortions if they are in immediate danger of dying, and even in these situations the process is difficult and drawn out. Between 2013-2014 there were only 23 lawful abortions in Northern Ireland.

Later this month in Northern Ireland, the second woman to be charged under the outdated 1861 Offences Against the Person Act will appear in court. The 35-year-old will face two charges of procuring a poison or other noxious substance, Mifepristone and Misoprostol, with the intention of helping her underage daughter induce a miscarriage.

Both substances are on the World Health Organisation’s essential medicine’s list and are used routinely in parts of the world where abortion is legal. Mara worries that if a second conviction is made, women in all parts of Ireland will be too scared of legal action to take the pills and will look to other methods.

This will put a huge strain on her organisation. ASN is a small charity that provides financial support to women seeking abortions. They offer information on the least expensive way to travel and have the procedure, conduct a financial assessment on how much money they can offer in each case, and provide overnight stays with volunteers if necessary. They never ask how someone got pregnant or why they want to have an abortion.

Since 1970 an estimated 60,000 women have travelled from Northern Ireland to England to have an abortion. But for many women, the costs, which can range from £400 to £2,000 are out of the question.

“We get calls from refugees, homeless people, people in abusive relationships, young women, old women.” Mara continues. “These people might not have visas, passports, money or the support network to travel to England.”

“It’s not the ones without money who are making the laws,” one asylum seeker in need of an abortion told ASN.

Amnesty International Northern Ireland Programme Director Patrick Corrigan, who was in Belfast Crown Court for the case of the second woman to face legal action, said: “How many more women are we to see hauled into the dock before these archaic laws are consigned to the history books where they belong?”

But Amnesty is calling only for abortion to be legalised in cases of rape, incest or severe and fatal foetal impairment. Mara says this does not go far enough. “If that passes there are going to be people who are like, oh well that’s good, that means all the good girls can have abortions and all those dirty sluts who had non-procreative sex and got caught out get to be punished by having babies,” she tells me.

“If you want to talk about poverty,” says Mara, “think about iron levels. Haemoglobin levels. If you’re haemoglobin is low they can’t do a surgery, they send you home then you have to go to the doctor, get an appointment, get a blood test, wait for the result, get iron tablets, take iron tablets for 8-10 days, get another blood test and then come back over. By that time your procedure might have gone up by £1,000.”

For those women who can finance a trip to England, or who have been supported by ASN or other organisations, clinics in England provide what Mara calls “Irish prices”, a significantly reduced rate to pay. “In England we can choose to go private,” says Mara, “but for these women, it’s not a choice and the clinics are hugely supportive.”

Northern Ireland needs to legalise abortion, and soon. Mara thinks that the outcome of this second trial will spark media outrage and with enough attention on the issue, maybe things will change.

Linkedin
RELATED ARTICLES
OTHER ARTICLES
Proposals to introduce a minimum GCSE threshold for student loans will disproportionately affect those from marginalised backgrounds.
In the wake of the decision by the supreme court to overturn Roe v Wade, thousands of protestors filled the streets to express their rage and anguish.
Whether it's partygate, the climate crisis or the spiralling cost of living, the fightback begins on the picket lines writes Tommy Vickerstaff
Photographer Matthew Brookes recalls following a group of young people in Venice Beach living in search of the perfect wave.
Photographer Arthur Grace recalls travelling through the Soviet Bloc and finding ways to evade the surveillance of his work.
For decades, an area of East London has served as a community hub for Vietnamese people looking for a taste of home.