News & Politics / Manchester is our home, nothing will ever change that 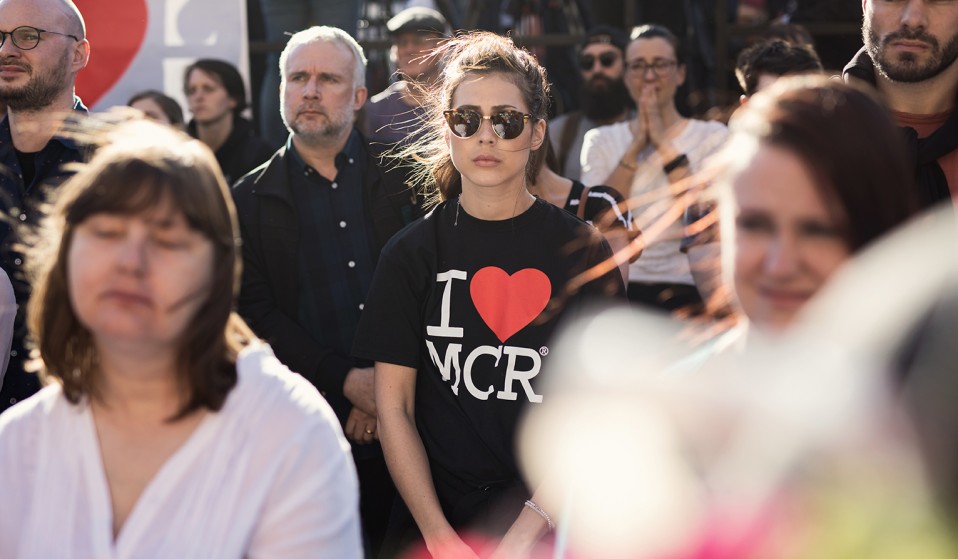 Manchester is hurting, but its people can feel the shards of their broken hearts standing up and quivering themselves back to shape. Why? Because it's home.

In the wake of the attack on Manchester we're asking those who love the city to share their thoughts and feelings. Photographer, filmmaker and skater Percy Dean came of age in the Northwest, but one day decided to run away. He came back though, people always do. Why? Because it's home.

I was 23-years-old and when I started running. I thought I was running from a tattered relationship, from a city that in my greedy self-effacing eyes had lost its lustre. I had no qualms, I was running towards what “I needed”: a better place, somewhere that understood me and could support who I was, what I wanted to be.

Looking back it’s surprising how quickly I made the North West fade from my view. I’d soon replaced its familiar warm peaty, saline embrace with the cold hard fingers of ambition, digging myself into a trench of work and ‘right direction’ for 12 long years.

Unfortunately the veil of youth will only cover your view for a limited period of time, obstinacy is usually what wears it out.

Like a Sycamore whose bare roots suddenly find themselves set deep in dry sand, I’d opened my eyes from the blinkers of my formative years and knew immediately I was not built to be here.

With a burnt, scarred and worn-out tail between my legs I headed back towards the Northwest and sank my desperate dry roots deep into the waters of the Mersey once again. I slowly began to fill myself with this place, and soon the influence of love pulled me against the current further upstream to Manchester.

I was still fragile, shaken from my attempt to walk away, still nervy from embarrassment.

Manchester saw me straight away for who I was and immediately opened its taught, pale-skinned, inky-dink laden, honest arms, wrapping me up so tightly that I quickly forgot who I before thought wanted to be. Her warmth washed me clean of youth, of loves, of direction and blind ideology, of a damaged path I’d paved for myself and returned me to a home, a man.

At that point in my life I was lost and floundering, but she taught me who I was and where I was meant to be. This city lit a candle and showed me where home was, showed me that home still existed.

“You alright lad? You can stay here if ye want?”

That call rings out all day here, from the very bones of this place.

It comes from the people this city breeds, and from the type of people who are drawn here.

The call comes furiously down the stone-lined canals and waterways, it comes pissing from the skies for at least six fucking months of the year. It comes from 10 million hearts chiselled by music, moors, factories and an unrivalled history of the common man’s struggle to fight for his light in this world.

It’s all tangible here like nowhere else, you can taste it everyday on the wind that howls through the old chimney stacks and over the terraced rooftops.

My heart was torn when I heard the news this morning, to see what had been done to this place to these people… but like everyone else in this city I can already feel the shards of my broken heart standing up and quivering itself back into shape. It’s everywhere, boiling up furiously.

Up through layers of concrete and tarmac, through the peat and pigeon shit: this city is vibrating itself whole once again, like it always has done before.

If we put our ears to the cobbles right now we can hear it coming… the rumble, we all can, it’s inside us.

The city of Manchester itself is shaking. Shaking through its tears with a deep resonating laughter at the thought that anyone or anything could ever crush a place powered by such true honest human beauty as this place we call home.

Linkedin
RELATED ARTICLES
OTHER ARTICLES
Ahead of the release of his new album, the producer reflects on his battle with drug use, getting into painting and what Madonna taught him.
As the Criminal Bar Association enters its fifth week of action, criminal barrister Russel Fraser explains why the legal professionals have walked out and how action is likely to escalate.
Photojournalist Fiora Garenzi spoke with people still living in Eastern Ukraine, an area which seen some of the heaviest fighting since the war began.
Photographer Anne-Marie Michel captures the women who through determination and strength are forging their own way in a male-dominated industry.
After rewriting the indie rulebook with her devastating songs about romantic longing, the singer-songwriter is now imagining a future in which the artist is no longer a product.
A series of photos by the late Jerry Dantzic taken in 1957 show a tender side to the iconic Jazz musician.