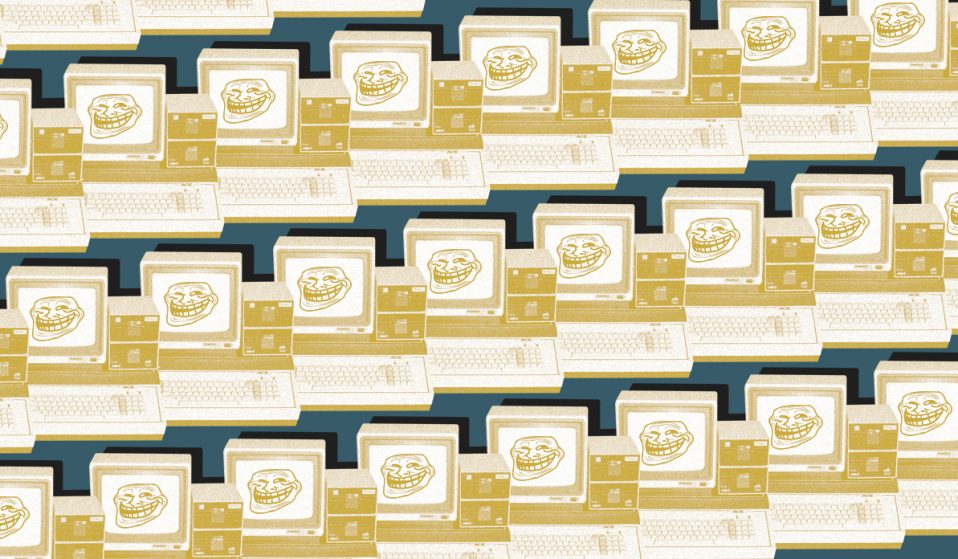 As a woman writer with political opinions, Dawn Foster is a regular target for trolls – receiving death and rape threats on a daily basis. She argues that the true danger lies in desensitisation.

As a woman writer with political opinions, Dawn Foster is a regular target for trolls – receiving death and rape threats on a daily basis. As this behaviour becomes increasingly normalised, she argues that the true danger lies in desensitisation.

Each morning, upon waking, I grind some coffee beans; fill a cafetiere; turn on the digital radio and feed the cat mewling and wrapping himself around my ankles. I pour a cup of coffee and open my email inbox, skim-reading a dozen or so messages telling me that I am a barely literate affront to humanity, that I should be raped and they’d be happy to do so, that I should stop writing, and violence might be the impetus needed to bring about that endgame. (No doubt someone will take issue with my first sentence here – likely the fact that I grind the coffee beans rather than drink Nescafé, and therefore am practically aristocracy, regardless of the fact I grew up in poverty).

When I first, accidentally, became a journalist, I thought it fascinating and a force for good that anyone could email me, ask me questions, send me possible story leads, small corrections, and share experiences. I wasn’t particularly naïve about human nature: the first time I was sexually harassed in public, I was 11 years old and in school uniform. The guy, parked up in a BMW, offered me £20 for a blowjob and laughed when I said no. I also moderated comments for a living, and saw just how vicious and wounding people try to be with only words and relative anonymity at their disposal.

But the fury I started to receive – through emails and a smaller number of handwritten letters – still surprised me. Every day I was contacted by men, and only men, pouring forth their bile, utterly incensed by me and what I dare to write. Some of my editors are used to this: they deal with a lot of female writers and writers of colour, writers who are gay, or in any way different, who have deigned to have an opinion. It’s akin to throwing petrol on a chip pan fire. Other editors are shocked at first, opening a portal to a room of people undergoing primal scream therapy.

Politics understandably causes heightened emotions, dealing as it does with people’s lives and their ethical, economic and moral beliefs. Some will understandably disagree with me, but few take time to email perfect strangers on articles. In my experience, almost all of them tend to be men – and the greater my public profile, the worse the abuse gets. As a human woman existing on the planet, I know misogyny is everywhere: I’ve experienced domestic violence, sexual harassment, sexual assault by complete strangers, and listened to male colleagues in other workplaces describe women in such a way it becomes clear they are total misogynists. But the internet’s anonymity enables this level of hatred to blossom and flourish, and for the targets to become easier than ever to attack.

It’s difficult to know why people do this: do they want to hurt me? Is the hope I am so wounded I struggle to type in the future, my hands frozen over the keys and images of their murderous, violent fantasies blinding my subconscious? Or that I’ll go to the police, go into hiding, panic and fall into depression? The police do nothing, even when a man with a previous conviction for violent, murderous threats emailed my editors and everyone who interacted with me, and told me he would pursue me until my death.

Sadly for the correspondents, I carry on writing, I carry on appearing on television, I carry on having these outre political opinions and men carry on being extremely mad online, either to me or my male editors, begging the poor journalists to control me, like either my father, or a beleaguered trainer with an infamously badly-behaved performing mare. I’ve come to realise that there is no clear plan of action, or hope. These men have simply decided their opinion is of so much worth, that they should share it regardless. That I have mine solicited and paid money for stings more than these men can even express, eliciting the complete psychological meltdown clear in the fever pitch wrath in their 2000-word late night emails.

Now, when I open my emails, I’ve become almost entirely desensitised by it all. Men tell me I am horrifically ugly and unattractive multiple times a day, and I don’t care. They argue I cannot write, I am immensely stupid, my opinions are utterly off the wall and dangerous, and I know they’re wrong. But knowing a significant group of men utterly despise me by virtue of being a woman is unlikely to contribute a particularly healthy relationship with the opposite sex, when I know men I’ve never met have had violent rape fantasies involving me, and then had the confidence to send those theatrical write-ups to editors, thinking it’s normal and acceptable.

The majority of men are not like this, but unbidden, I find myself more on guard than I ever was before. Too many men have proudly sent lengthy pen portraits of my imagined rape, murder or maiming, glutted with detail, and have expended plenty of energy on these dreams. These men aren’t easy to spot on public transport, and now I’m warier than I have been at any other point in my life.

The internet is still seen as the Wild West – a consequence-free zone where normal social mores can be cast off as cumbersome shackles. For women, that means a suffocating level of utter misogyny, flourishing, often personalised, and inescapable. We shouldn’t be desensitised in the street when men shout “Nice tits” or try to flash you on the short walk home. My editors shouldn’t have to receive emails calling for my death, and simply shrug because it’s the sixth such email they’ve had today. I shouldn’t have to read an extraordinarily graphic email from a complete stranger imagining him raping me in explicit detail, frame by frame, and roll my eyes that an article on food banks prompted this sexualised rage. We all hide parts of ourselves from others, but the internet has helped broaden, feed and incubate the hidden self to such an extent that I worry for many people that there is no link between the public and private self any more.

I have no easy answers: the need for anonymity online is clear, but the consequences are this barrage of misogyny. Combined with my gender, there are targeted emails attacking my disability, the fact I’m estranged from my family, and my Catholicism. If I were black or Asian, the open racism experienced in addition to the murderous misogyny would likely crush me. Ending anonymity overnight would do little, and many people are happy to put their names to letters detailing how, where and when they’d like to see me raped to death. We shouldn’t have to deal with it, but do. All I can suggest instead is, if you read an article that resonated with you, drop the author a short note telling them how much you appreciated the work.

Linkedin
RELATED ARTICLES
OTHER ARTICLES
Hundreds gathered together to protest the policing bill by making as much of a racket as possible.
The photographer reflects on building trust with his subjects and using the street as his studio.
In 1984, Martin Shakeshaft set out to document the miner’s strike as it really happened, using his photography as a tool for activism.
Those set to be impacted by the governments ’undemocratic’ bill explain why it risks silencing them.
From the queues outside to the last ones standing, Francesco Mellina’s new photo book follows a night that has gone down in the Northern-Soul history books.
From Brooklyn gang members, to Welsh miners and the residents of East Harlem, Bruce Davidson used his camera to shine a light on the most marginalised.