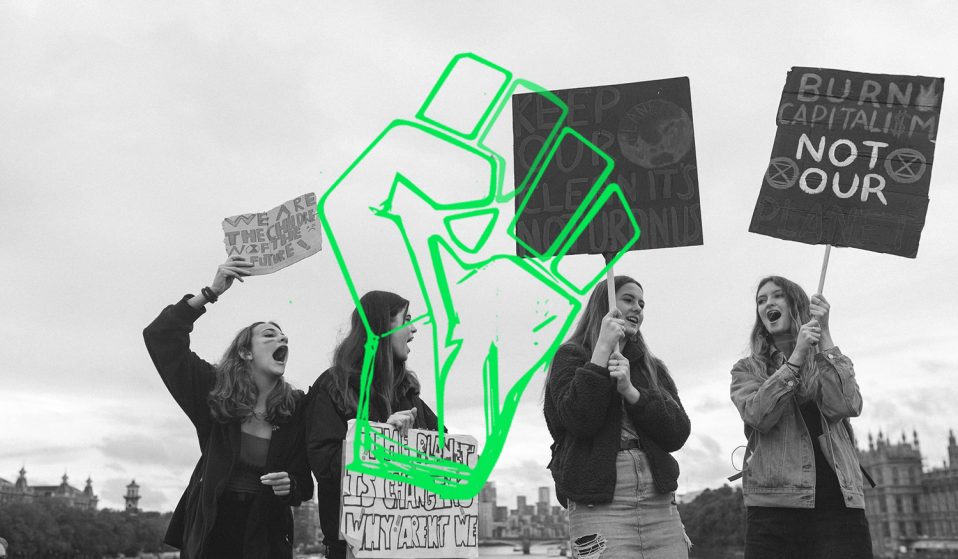 The culture war is no longer a trivial sideshow to the fight against material inequality, writes Ash Sarkar. If we lose, we lose on the climate too.

The culture war is no longer a trivial sideshow to the fight against material inequality, writes Ash Sarkar. If we lose, we lose on the climate too.

We’re only a few weeks into the new decade, but it’s safe to declare 2020 as the year when climate change officially got dragged into the culture war. It joins the more quotidien stuff about Apu from The Simpsons, if transgender people are unreasonable for wanting to live in safety and dignity, and whether white people being told they look bad in cornrows constitutes racial oppression.

It’s strange. A few years ago, it felt like the boiling of our planet in the interest of wealth extraction had about as much cultural salience as Duncan from Blue. Climate change in the cultural imagination came attached to a certain sense of loftiness: impossibly huge numbers superimposed over aerial shots of the Great Pacific Garbage Patch, drone footage of wind turbines, smiling vegetarians wearing Friends of the Earth t-shirts.

Worrying too much about the amount of carbon in our atmosphere was the stuff of space cadets. Even the way politicians engaged with the issue came across as ineffective, distant and appallingly patrician. Polly Mackenzie, at the time a special advisor to Nick Clegg, boasted of how the Liberal Democrats secured the 5p charge for carrier bags in exchange for a coalition agreement to tighten benefit sanctions. David Cameron established his green credentials by jumping aboard a huskie-powered sled and speeding off to inspect a Norwegian glacier back in 2006 – perhaps a little on the nose, but a decent enough metaphor for an environmental agenda which seemed to have little to do with peoples’ lives.

Today, the vibe is wholly different.  As Richard Seymour observes, our media has become one big,  popping vein of enraged climate sadists. Think about the confected fury of Piers Morgan when presented with vegan versions of classic savoury pastries that he’s under no obligation to actually purchase or consume. Or the effervescent glee with which the 51-year old Julia Hartley-Brewer informed the teenage Greta Thunburg that she’d booked a long-haul flight. Or the strange way in which right-wing ‘influencer’ men like Jordan Peterson and Laurence Fox take pride in letting their supporters know that, by swearing off vegetables and committing themselves full-time to the pursuit of constipation, they refused to be cowed by the idea that eating meat might be bad for the environment.

As a gesture of solidarity with the tens of millions of carrots murdered every year to facilitate #Veganuary , tonight I forsake vegetables. pic.twitter.com/Tr2XvpZLfi

Where did this come from? It might be through a clogged artery, but these professionally outraged right-wingers have their finger on the pulse of something deeper. In part, climate sadism forms part of a generalised backlash against that technocratic, managerial and hopelessly hypocritical green tokenism of the coalition years. It’s marked by an appeal to a deeply reactionary and authoritarian shared “common sense”, while simultaneously viewing any attempt to reshape society in line with the common good to be an unacceptable compromise on the values of individualism and faith that the market will sort stuff out eventually. Far from being an anti-establishment ideology, climate sadism is really just Thatcherism on steroids.

Both climate sadism and green incrementalism operate as cultural constraints on our political imagination. As long as misinformation floods Australian Facebook feeds and WhatsApp group chats during the worst megafires for a generation, the markets may continue unbothered for one more day. Climate change isn’t an environmental crisis so much as an economic one – there’s a lot of money to be made in watching the world burn, and no free market incentive to upend the status quo. Our current model of wealth extraction is both an ecological disaster, and produces corrosive levels of carbon inequality: just 100 companies are responsible for 71 per cent of global emissions.

It takes a culture industry to prop up fossil fuels markets. In the US alone, fossil fuel interests have outspent environmental groups in lobbying by a ratio of 10:1. The Koch brothers, known for their aggressive bankrolling of conservative and ‘libertarian’ causes, themselves run Koch Industries. It’s reported that the petrochemicals giant “routinely released some 24 million tons of carbon dioxide into the atmosphere a year”. As such, the current culture war is a reflection of a deepening material conflict. Ranged against one another are a world economy based on the relentless and inexhaustible exploitation of land, labour, and resources, and on the other side, a creeping realisation that the coming climate reckoning won’t be contained by either class distinction or border regimes.

The culture war is no longer a trivial sideshow to the real fight against material inequality. If we lose the culture war, we lose on the climate too.

Linkedin
RELATED ARTICLES
OTHER ARTICLES
The first-generation graffiti artist reflects on the tagging’s emergence as an art form and the players who pushed the medium forward.
Photographer Sean Maung reflects on documenting a small town in Pennsylvania afflicted by high levels of unemployment, poverty, violence, crime, and addiction.
From snake handlers to mardi-gras revellers, Tom “TBow” Bowden’s photos provide a snapshot of the wonderful and weird people who make up America.
After fleeing the war in Ukraine, people are finding it impossible to secure affordable and decent housing in the UK.
Jeffrey Henson Scales intimate portraits and protest images of the BPP and its leaders offer a rare insight into organisation at a time of societal upheaval.
David 'Dee' Delgado’s photo project is about honouring and uplifting the city of his youth, and a world rapidly disappearing under the relentless onslaught of gentrification.