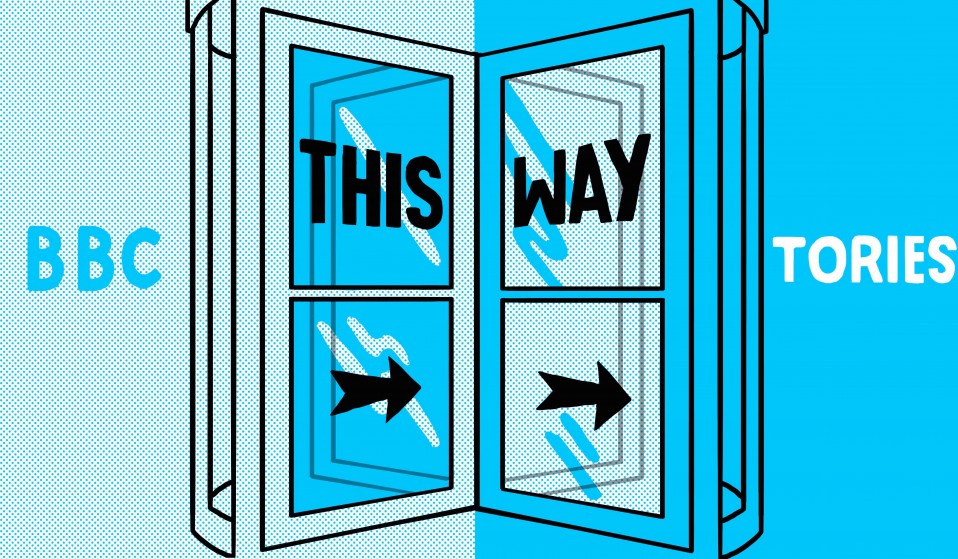 Last night news broke that two senior BBC political journalists held meetings with the Tories about moving to work at Number 10. Let's talk about neutrality shall we?

Last night news broke that two senior BBC political journalists held meetings with the Tories about moving to work at Number 10. No wonder the Beeb is out of touch with the political reality of today.

James Landale, an Old Etonian who joined the BBC from The Times, is currently the BBC’s diplomatic correspondent, having previously worked as deputy political editor under Nick Robinson. This morning he confirmed on Twitter that he had been approached by No.10, but said that he had ‘decided not to apply’. This apparently leaves Robbie Gibb, the BBC’s Live Political Programmes, as the frontrunner for the job.

Did I blink or was @RobbieGibb's name missing from the @daily_politics closing credits?

The news that two BBC men were lined up for the position came at a time when the BBC faces unprecedented criticism from the left. Whilst supporters of Jeremy Corbyn naturally expect negative reporting from a press that is overwhelmingly aligned to the Conservatives and owned by billionaires, many have been shocked by the poor and often hostile coverage they have received from the BBC, which is now increasingly – and correctly – seen as an Establishment organisation; and probably unfairly as pro-Tory.

The BBC’s political editor, Laura Kuenssberg, has been a particular focus of criticism from Labour supporters, and was last year found to have breached the BBC’s impartiality rules in an early and important report on Corbyn. But the BBC’s leftwing critics can also point to a number of senior BBC figures with known conservative associations. The Today presenter and former political editor, Nick Robinson, is a former president of Oxford University’s Conservative Association.

James Harding, who as director of news has reputedly centralised the BBC’s news operations, is a former editor of The Times, and the BBC’s high profile political presenter, Andrew Neil, is well known as a right-winger, having briefly worked for the Conservative Party before making his name in Murdoch enterprises.

Robbie Gibb, the frontrunner to be the Tories’ new Alastair Campbell, is Andrew Neil’s editor at the Daily Politics. He is also the brother of Tory Minister Nicholas Gibb, which without wanting to cast aspersions on his professional integrity, is not a good look. Two current, senior Tory Ministers are also ex-BBC: Chris Grayling and Michael Gove.

Should we treat this news as further evidence of a right-wing bias at the BBC? To be fair, the presence of BBC figures in any short list for a communications job is not especially surprising given the centrality of the BBC to the UK news media. BBC men being lined up for such a senior political role though at least illustrates that the Corporation is more politically heterodox than the right-wing press tend to give it credit for.

That of course doesn’t mean it exhibits an overall Tory bias, and the BBC-Westminster revolving door is certainly not exclusive to the Conservative Party. A good number of Labour politicians have been back and forth to and from the BBC as well, notably the Blairites Chris Bryant, Ben Bradshaw, and James Purnell, who is the BBC’s current Head of Strategy. There are even some figures on the left. The socialist Labour MP Clive Lewis is also ex-BBC, as is Jeremy Corbyn’s deputy director of strategy and communications, Steve Howell.

Neither Lewis nor Howell, though, held senior editorial positions at the BBC. There, at the core of the somewhat bewildering BBC machine, the politics of the left don’t get a look in. As one BBC journalist told me, senior personnel are ‘drawn from a very narrow English white upper-middle-class Oxbridge background. They already have a mind-set which means that they think in a certain way, and I think it’s Blairism, Cameronism, over the last twenty years.’

That is the political spectrum for what this journalist called the ‘core workforce of decision-makers’ at the BBC. It is not so much that these individuals are biased to the left or the right, but that they, and the institution they head, are embedded within the world of formal politics. This is reflected in the BBC’s reporting, which as study after study has shown, overwhelmingly defers to officialdom and to powerful interests, and unfortunately means they seem little able to understand anything political beyond it. This is why the BBC responded so poorly to the rise of Corbynism. They simply didn’t understand it.

The movement of personnel to and from political reporting, into political consultancy and back, of which this is latest example, is one mechanism through which a certain political common sense is formed amongst the political-media elite. It is of course understandable that politicians would want those with experience and understanding of the media working for them in communications. But the ‘revolving door’ still raises serious questions about the capacity of the media to hold governments to account, or even to understand contemporary politics.

The professional instincts of those at the BBC who regularly make editorial decisions on behalf of the public are necessarily political. The notion of ‘bias’ though doesn’t quite capture what is going on. It is not that these individuals might be acting on secret political prejudices, although of course they may. Rather the risk is that a certain shared understanding of politics becomes formed around tight cliques, which are not only unrepresentative of the public, but have an increasingly tenuous grasp on political reality.

Dr Tom Mills is a Lecturer in Sociology at Aston University and author of The BBC: Myth of a Public Service. Follow him in Twitter.

Linkedin
RELATED ARTICLES
OTHER ARTICLES
A group of young Palestinians have found temporary freedom in the act of parkour, reimagining wreckage and ruins as a series of high-octane playgrounds.
Sean Maung’s photos are a love letter to the Black and brown communities that make up New York.
Yesterday thousands gathered outside Buckingham Palace after news of the Queen’s death broke.
The two-day long event returned to London this year, showcasing a spectacular parade, steel bands and Caribbean food.
Following the announcement of an 80% hike in the energy price cap from 1st October, crowds gathered outside the offices of energy regulator Ofgem to protest and declare their intention to undertake a payment strike.
Birdy Chu reflects on documenting the historic moment in which the territory was formally passed back from the UK to China.