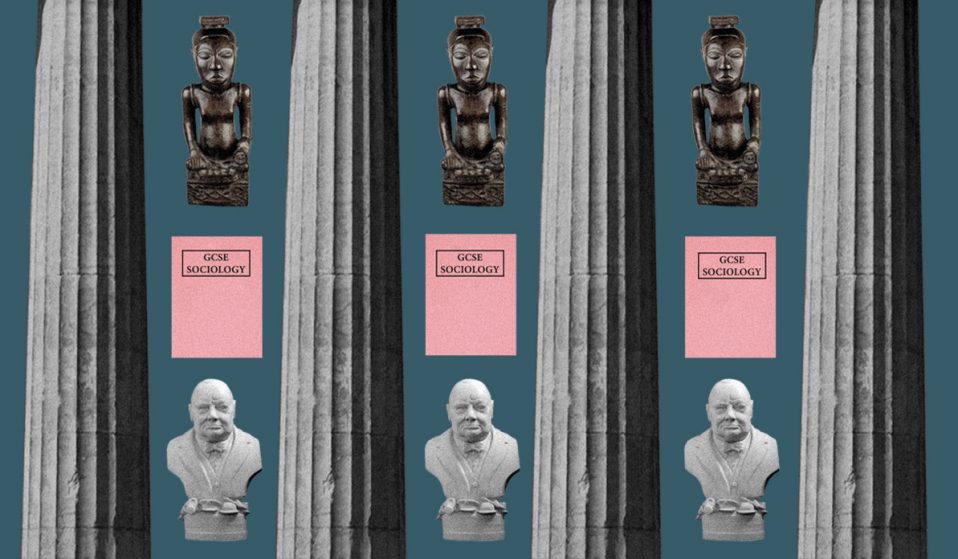 The British curriculum deliberately erases the experiences of minorities throughout history. Until we confront this, Black History Month feels like a waste of time.

The British education curriculum champions racists, reinforces stereotypes, and deliberately erases the experiences of minorities throughout history. Until we confront this uncomfortable reality, Black History Month feels like a waste of time.

Every October, Britain celebrates Black History Month. Yes, Britain: the small island that’s hell-bent on forgetting its past and believing its own lies. It is now so well-versed at distorting the representation of race that it’s become default setting.

At the beginning of the month, the BBC reported that AQA, a popular exam board, were going to stop selling GCSE Sociology textbooks that describe Caribbean men as “largely absent” from family situations. As stereotypes often are, this was presented without any social or historical context.

A few days afterwards, Piers Morgan berated academic Kehinde Andrews on live television when the latter argued that Britain was built on racism, making icons of racist politicians such as Winston Churchill in the process. Morgan was so enraged that Andrews would sully the name of a national hero that he suggested he should simply move somewhere else. “Why live in a country that you loathe?” he asked.

Elsewhere, UK institutions supposedly committed to enlightenment – namely museums and galleries – gloss over the histories of stolen artefacts in order to remain neutral. The British Museum recently elected to correct this by telling the ‘full history’ of worldly items acquired by other means, to show “not everything was looted.” However, with this move, it appeared as if they were more interested in covering their backs than allowing people to learn about what was stolen.

It’s fitting then, that during Black History Month, rather than initiating productive and healing conversations as a nation, we’ve instead opted for debates about the crucial – and seemingly deliberate – erasure of history. It reveals a far greater problem with how British history is both taught and remembered.

When Jeremy Corbyn made a recent pledge to teach children about the legacy and impact of the British empire and colonialism, his critics argued he was too pessimistic about Britain. “Black history is British history, and it should not be confined to a single month each year,” he said, quite rightly. “It is vital that future generations understand the role that Black Britons have played in our country’s history and the struggle for racial equality.”

Still, there was a backlash: the Conservatives accused him of putting “ideology” before children’s education, while the “POLITICAL CORRECTNESS GONE MAD” Twitter brigade felt he was forcing the UK to shame itself in a bid to appease the easily offended.

But this shouldn’t be glossed over. There is a direct impact when the country elects to cling onto half-truths; a good knowledge of the past is crucial to understanding our present circumstances. The AQA GCSE text is a prime example: people love poking fun at the dynamics of black – and, more specifically, Caribbean – families. Despite having a very-present dad, I’ve been on the receiving end of many absent father jokes in my lifetime.

For a sociological textbook, this passage reads as if social problems can exist in isolation to a particularly ruthless history of interference from the UK. A report by race equality think tank Runnymede did find that 59 per cent of black Caribbean children in the UK are raised in single-parent families, but it also made reference and links to other social problems – like the over-policing of black men, the racial pay gap, unemployment and so on.

It is irresponsible and insufficient to view the separation of family units in the Caribbean through a lens that ignores the massive legacy of slavery – which is how most those families came to live there in the first place – and its relationship with the Commonwealth.

During slavery, family life was intricately tied to the idea of a well resourced, efficient workforce. There was no legal basis for marriage, plantation life meant that men worked tirelessly and were sometimes sold to other plantations away from their families. Generations later, Caribbean islands faced economic hardship, which saw some children passed to more financially stable relatives, or with one or both parents leaving the family home in search of work (many of them to the UK) so they could send money back.

But you won’t see any of this in the history curriculum. What you’ll find instead is a glowing report of brave countrymen that were quite blatantly racist – such as Churchill. Kehinde Andrews was vilified by both social media users and the right-wing press for simply daring to argue that there are gaps in the history Brits choose to remember.  It begs the question: if people like Churchill were such heroes, why are people so afraid to examine their full legacy?

The average British person cannot reconcile the fact that a national hero that got us through the war also believed white people were a “stronger” and “higher-grade race” than black people. He openly confessed his “hate” for Indians, which he used as an excuse to allow famine to wipe three million of them out under his watch. “The famine was their own fault for breeding like rabbits,” he said.

Right now, white British people are having an identity crisis. Sure, it’s confusing to realise that you’ve been shielded from your own past in order to maintain a sense of national pride, but spare a thought for those who’ve had their painful experiences hidden to make a nation feel better. The education system in this country is nothing short of propaganda. The prosperity you long for again was built on the degradation of black and brown people.

Given that most people receive history lessons via museums, textbooks, and television, we deserve to see a fuller picture: one that makes the information relevant and gives us the tools to unpack our current world. Any representation of Britain’s legacy that excludes the ritual disrespect for the lives of people of colour is a fairytale.

We need to stop avoiding these difficult conversations and confront uncomfortable truths – regardless of what month it is.

Linkedin
RELATED ARTICLES
OTHER ARTICLES
Financial turmoil is pushing people who work in the sex industry into more dangerous and desperate situations as a means of survival.
By turning a real-life crisis into daytime television fodder, TV bosses have once again shown themselves to be completely out of touch with audiences.
Birdy Chu reflects on documenting the historic moment in which the territory was formally passed back from the UK to China.
The two-day long event returned to London this year, showcasing a spectacular parade, steel bands and Caribbean food.
Thousands attended the annual event this year to wheelie through the city and call for ‘knives down, bikes up’.
Sean Maung’s photos are a love letter to the Black and brown communities that make up New York.