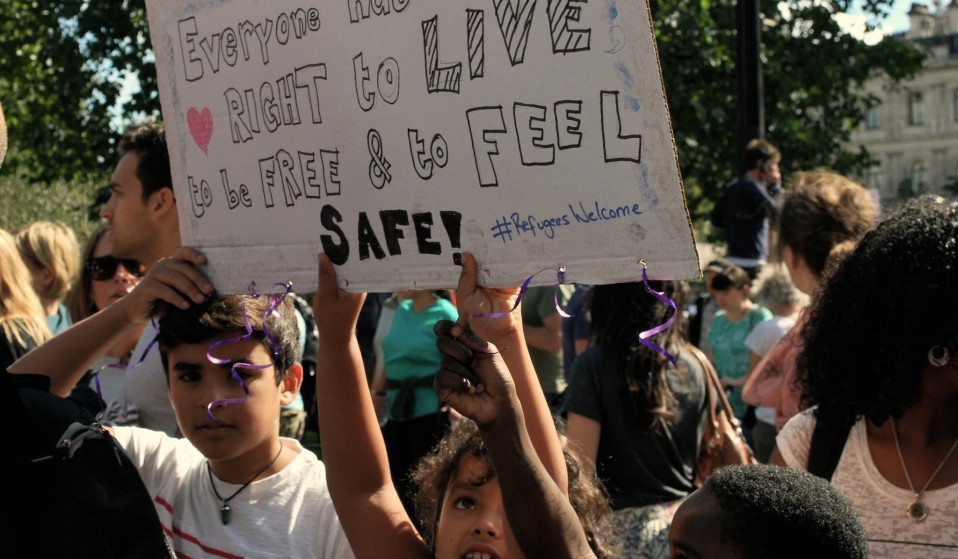 Safe spaces are derided by those who have the luxury of safety already.

Not a day goes by that students and women's groups aren't mocked by the right-wing press and liberal thinkers for creating safe-spaces, environments in which some danger and oppression can be kept at bay. Safe spaces are derided by those who have the luxury of safety already.

Last night the British government voted against granting 3,000 Syrian child refugees asylum in the United Kingdom, stripping them of a chance of safety, and neglecting any sign of humanity along the way. Why? To preserve their own perceived safety, yet the liberal-right deride the creation of “safe spaces” by students, activists, and those on the margins of society.

The “safe space”, much like “political correctness” before it, has become a pejorative you are most likely to hear from the lips of those loudly despairing about it. Just as “political correctness” was used to sneer at feminist or anti-racist politics, the “safe space” is now weaponised to deride the politics of self-care and anti-violence that have developed in many North American and British university campuses and women’s groups.

The attempt to create political arenas in which those partaking are more conscious of trauma and violence is, we are told, the very opposite of true consciousness. It is, actually, incredibly coddled and foolish –mention safe spaces anywhere in the media, if you dare, and within seconds some bright spark will hit you with this shattering reality check: “but the world is not a safe space!” As if that wasn’t a given. The safe space, as envisioned by the liberal right, is the imaginary epicentre of all that is detestable on the left.  Sometimes the safe space is deluded and infantile. At other times, it is so thuggish in its methods of excluding all potential harm it becomes fascism itself. Senator McCarthy would quake before its brutal denunciations and silencing of critics.

You cannot be a liberal media commentator in Britain, it seems, and not have posed the crucial question: is this “safety”, in fact, the new clear and present danger? Somewhat counter intuitively, I was reminded of this conservative terror at the concept of safe spaces on hearing that the UK government voted against granting asylum to 3,000 unaccompanied Syrian child refugees into Britain last night, children already stranded in Europe. It is the latest stroke of indifferent cruelty in the UK government’s shameful response to the Syrian refugee crisis. Acting on advice from the Home Office, the government adopted the view that providing refuge (i.e. safety) to these children would only encourage more to follow.

It is incredibly arrogant reasoning to imagine it is a system of incentives we curate, rather than the carnage they are fleeing, that is the driving factor for the refugees’ migration. It strikes me as grimly ironic that what the political right claims to abhor so intensely in its glib imaginings of reactionary “safe spaces”, it ruthlessly and heinously enacts and enforces using the full mechanics of the state itself. Tory Britain is the myopic and self-righteous safe space par excellence. This latest inhumanity in the face of refugee children, some now orphans, is the most brutal end of a spectrum of neuroses about preserving our own, sovereign, safety.

It’s a hefty that’s infecting British identity at every juncture: from  the low key xenophobia of the Brexit campaign to Theresa May’s calls for Britain to withdraw from the European Convention of Human Rights. The world is, indeed, not a safe space. Syria burns on and spills out millions who will keep coming regardless. Yet the government, filled as it is with the coddled and petulant children of millionaires who can bend reality (or at least tax regimes) to their will – refuses to acknowledge this fact. In truth, what the “safe spaces” policies of the student unions have honestly acknowledged, unlike their Parliamentary elders, is the fundamental inequity of safety – who gets to feel it, for how long, and when. Psychologists tell us all human beings arrive in the world with only two fears – loud noises and falling.

Nature instils in us all these building blocks: an intrinsic alertness to primal danger. In essence, an acute recognition of the absence of safety is written into our cells. That our need for safety is so universally human makes it an easy tool of control, oppression and violence. Safety is our most basic, animal preoccupation – so those who possess it already have freedoms those who don’t can’t even begin to claim. All power, arguably, resides in the ability to control the safety of another.

It is not in mocking the self-examining politics of teenage students, but in the global displacement of refugees, and Britain’s callous shoring up of her barbed wire borders, that we see the true tyranny of an indulgent, cowardly devotion to our own cosy safe space. The continuance of which – at a global level – now necessarily relies on the fatal denial of others’. Instead, we rail against trigger warnings, which may be used to neutralise the psychic sources of our personal boogeymen, rather than the triggers on the state’s guns, which may be used to kill the human sources of our political ones.

How self-congratulating it is for any of us to pompously opine in the name of satisfied liberalism – as if we are the first to have realised it – that the world is not a safe space, when those words ring harshly in the ears of the children left wandering a continent and whose pleas for safety we leave unanswered.

Linkedin
RELATED ARTICLES
OTHER ARTICLES
A group of young Palestinians have found temporary freedom in the act of parkour, reimagining wreckage and ruins as a series of high-octane playgrounds.
The two-day long event returned to London this year, showcasing a spectacular parade, steel bands and Caribbean food.
Ahead of the release of their first collaborative album, the producer and rapper talk psychedelics and the state of UK hip hop.
Financial turmoil is pushing people who work in the sex industry into more dangerous and desperate situations as a means of survival.
Rhiannon Adam spent three months capturing an ageing society wracked by division, isolation, and the aftermath of scandal.
Sean Maung’s photos are a love letter to the Black and brown communities that make up New York.