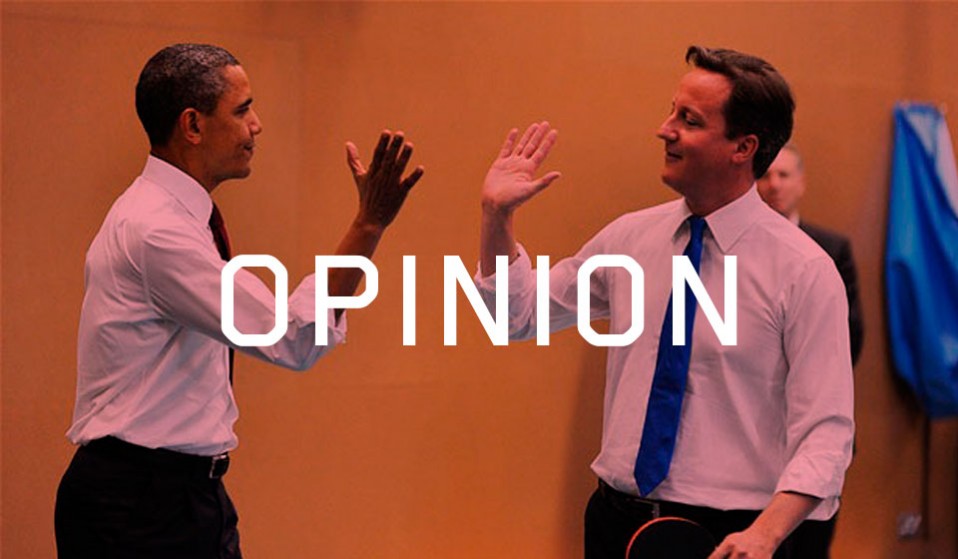 When Cameron describes how Obama calls him 'bro' he is desperately trying to stay relevant to a generation who is tired of his shit. Michael Fordham explains.

When Cameron describes how Obama calls him 'bro' he is desperately trying to stay relevant to a generation who is tired of his shit. Michael Fordham explains.

Despite the paroxysms of toe-curling political PR that have been emanating from the mainstream media these last few days, there’s a good chance you hadn’t noticed. In 17 weeks the British people will be invited to exercise their democratic right and elect a government. Are you bothered? Am I? Is Rusty Rockets? It is of course widely perceived that there is a crisis in democracy – and that crisis spins around the notion that a goodly proportion of the UK citizenry, especially young people, aren’t politically engaged.

Talk about missing the point.

Because you know the truth. People – especially the under forties – are eschewing the ballot box but are politically engaged in other ways and perhaps more intensely than ever before. Around the world people have realised, unconsciously perhaps, that true politics isn’t about a five yearly trip to the Primary School on the corner to tick a box on polling slip. They’ve realised that real engagement with the democratic process is about living your life with a vision of your own. There’s nothing more political than getting up and doing things for yourself – wether that’s just building your own skate spot or occupying a government building in protest. That’s why the recent Referendum on Scottish Independence bucked the trend here in the UK, bringing almost 90% of the Scottish electorate out on the streets to vote. Indyref was the manifestation of a new sort of politics – one that could actually change something. Cameron, Brown – anyone invested in the romance of the ancient regime must have been shitting themselves.

But despite the exception to the democratic rule, it is an undeniable fact that the old parliamentary creed, as represented by Cameron, Merkel AND Obama, is indeed on its arse. Membership of mainstream political parties is plummeting and with each new economic cycle, professional politics becomes more and more the preserve of the privileged. In local, European and General Elections the world over, turnouts these days like the one in Scotland are unheard of. And the reason for that is that it’s the deeply conservative croneyism of traditional politics that has produced a cabinet full of inherited millionaires. It has regressed parliamentary debate to an adversarial, posh-boy shitfight. In the British context this means that the sole training ground for parliament has remained the oak-panelled debating halls of private schools and Oxbridge. In America this culture has meant hopelessly palsied progress on reform thanks to an eternally rednecked second chamber. And, perhaps most worryingly, it has encouraged the rise of veiled extreme right-wing populist movements like UKIP in every corner of the democratic world.

The fact that UK Prime Minister David Cameron wants us to believe that the US president calls him a ‘bro’ is so irrelevant it’s laughable. Not only does it smack of that hackneyed old cultural trope of your ageing uncle busting out the funky chicken and embarrassing himself at your 21st birthday party – it barks entirely up the wrong tree.

Because the fact is, that the democratic process will go on without us. Whether you or I, him, her or your anarchist little brother cares which bunch of suits manage to clamber their way to the helm of parliament – it will happen. The rest of us will, meanwhile, continue to live our lives, presiding over the micro-management of our own political systems – getting up and changing things for ourselves, on the whole ignoring the tiresome efforts of mainstream politicians to seem relevant.

We’ve just got to hope that, here in the rapidly retreating comfortable corners of the planet, we retain the freedom to stay cynical.

Linkedin
RELATED ARTICLES
OTHER ARTICLES
John John Florence has shed his über grom status and won the 2014 Quiksilver Pro France. And the ramifications for surfing, says Michael Fordham, run deeper than you think.
Michael Fordham bears witness to The Most Important Day in Scottish History.
A Spanish-speaking, half-Japanese American now living in England considers what the trending internet meme 'Engrish' really says about us all.