News & Politics / Opinion / Drone strikes and a handful of refugees: the UK’s Syria policy is shameful 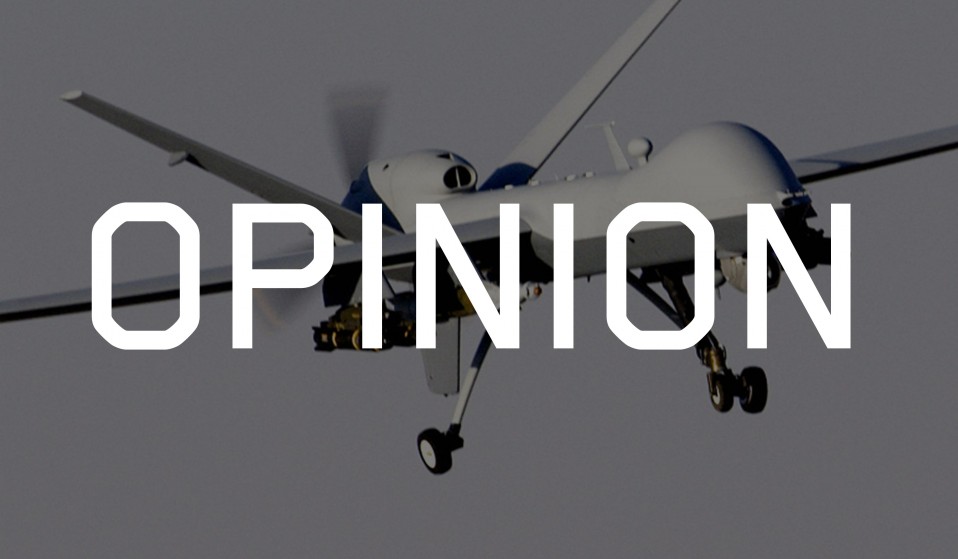 When David Cameron announced yesterday a successful drone strike on a British-born target in Syria, was he cynically playing to both the hawks and the doves while conceding little in the way of true humanitarian responsibility?

When David Cameron announced yesterday a successful drone strike on a British-born target in Syria, was he cynically playing to both the hawks and the doves while conceding little in the way of true humanitarian responsibility?

Somewhere deeply buried in the unconscious of the British people is the idea that we as a nation are really good at taking people out. We do it in a gentlemanly fashion, too, of course, and are polite and ethical while we dominate, destroy and assassinate. Not like those vulgar Americans who do it so…. crassly, and with so much raw cash and tardy grammar. And for the establishment of this country as well as the good old fashioned working classes who remain in their thrall, this carnal knowledge is hardly buried at all.

The UK armed services somewhere deep and justified, is the precision tool of British policy and has been since the beginning. The industrial revolution happened here first and more powerfully and more dynamically than anywhere else on the planet – The British created an empire and dominated foreign markets through graft, craft and physical force to fuel the machine that made the industrial revolution possible. Even now, when the structure of Empire lays in post-colonial ruins, the Brits’ small and professional armed forces is probably the best, most highly trained and best drilled in the world. At the top of the pile, the bleeding edge of British foreign policy, are the SAS – the wiry little guys in beige berets, who, hanging out behind barbed wire in Hereford, have captured so strongly the British imagination. But there’s a new pretender to the throne of our post-colonial ambitions. Call it a drone. Call it an Unmanned Aerial Vehicle. Its actual name is the General Atomics MQ-1 Predator. Pretty cool in an apocalyptic way, eh? 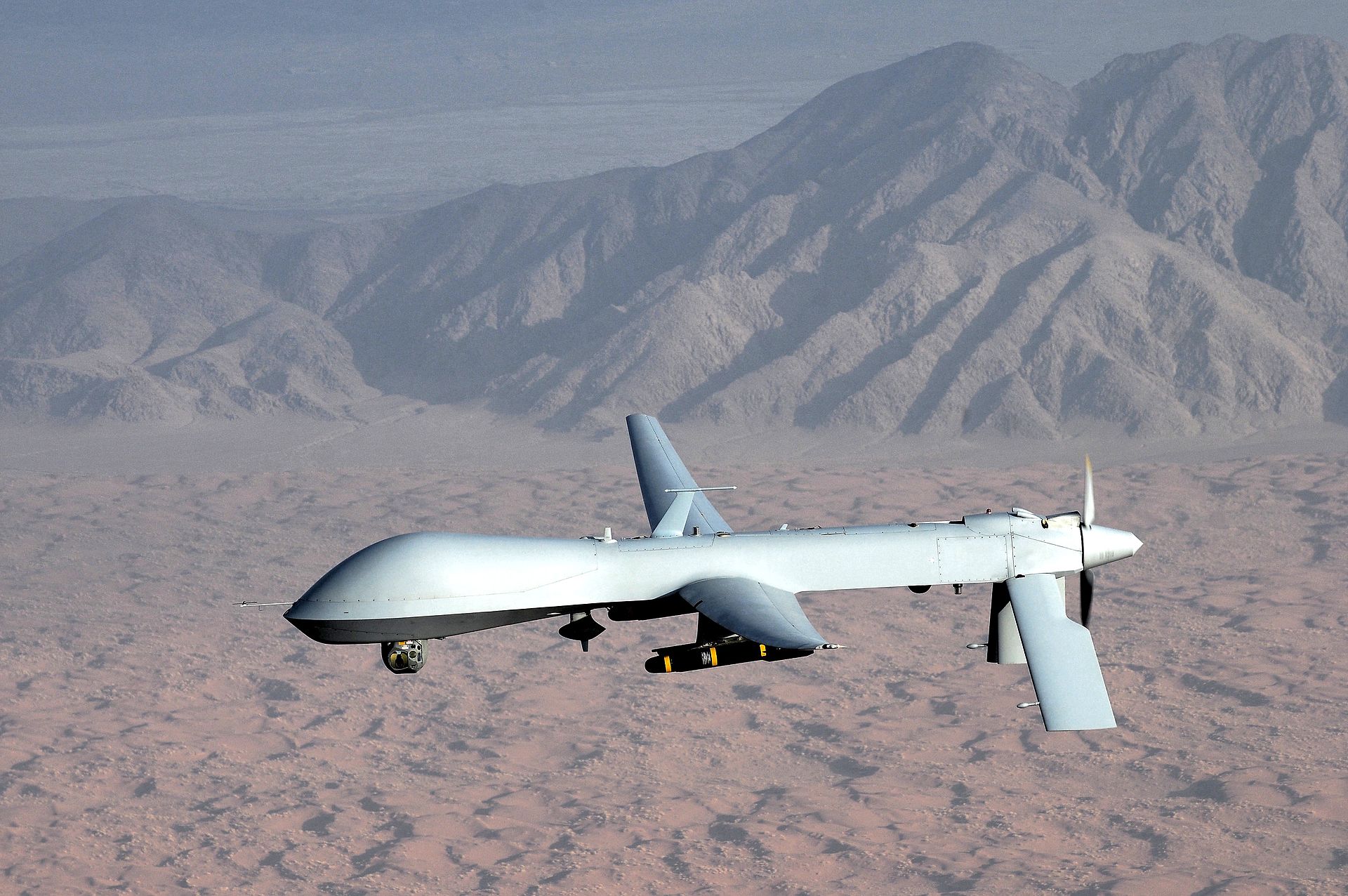 These machines are incredible pieces of technology. They would make a killer feature in a mid-nineties Lad Mag. I’m getting a semi just thinking about them. Unit cost is about $5m US. In the UK forces they are flown by the RAF and The Royal Artillery. Their launch and arming stations are delivered to a local friendly nation in the back of a Hercules transport aircraft. Once deployed they can stay in the air and operate effectively for up to 35 hours at a time, driven by a near-silent running, propeller driven Rotax engine. They are controlled by wire from studios in home country. The most recent armed versions, about which you can read all over the webs, can recognise a human heat signature from an altitude of 3,000 metres, and carry the snappily-monikered ‘Hellfire’ missiles that can deliver 9kg of a high-explosive, armour piercing shell from a distance of 8km.

It’s incredible to think what sort of punch the latest issues are packing. If I can read about this stuff on Wikipedia, can you imagine what sort of munitions the CIA and the SAS are directing? The real daddy of this new generation is the MQ-9 Reaper. This beast can carry FIFTEEN times the ordnance of the Predator and carries funky little extras like enemy radar evasion and extensive electronic countermeasures to scramble guidance systems of incoming ordnance. But the Brits can’t afford these yet. They cost $16m US each. Never mind. Maybe one day.

But here’s the thing. It is impossible to perform an accurate Predator, or Reaper, strike on a specific target without Special Forces Operatives on the ground to direct it – to acquire and accurately update targets. That’s right. Even this latest manifestation of Deus Ex Machina needs a ballsy little killer on the ground to make it work properly. In the last parliament, Cameron said that he would not seek to go to war in Syria without the approval of Parliament. If a Predator strike isn’t an act of war, then what is?

The recently revealed hit on the ‘Welsh Jihadi’ could have been a lucky shot. Or it didn’t actually happen at all. But the ‘revelation’ of an accurate Predator strike on Syria is a tacit admission that we do actually have boots on the ground – as well as unmanned aerial vehicles whispering silently in the sky.

The question that needs to be asked is this: of all the covert surveillance, assassination, conspiracy and plot carried on by the British State (in collaboration with other establishment cabals), why did Cameron choose to inform parliament about this one? Could it be an appeasement to the hawkish right in counterpoint to his apparently liberal-hearted announcement on the acceptance of a quota of refugees? Looked at from this angle, then Cameron’s announcement plumbs the depths of cynicism.

Dig a little deeper into that announcement on the 20,000 quota and it crumbles to dust. The figure is slated to be spread over five years, during which time refugees fleeing from Syria are likely to rise exponentially. By contrast, Germany announced it could accept 500,000 Syrian refugees yearly for ‘several years’. In addition to Cameron’s puny admission of 4,000 people per year, it appears that within the new rules, after five years refugees would have to apply for permanent leave to remain in Britain, which, of course, could mean that a significant proportion of these people would not be granted leave to remain and therefore face deportation – particularly children, whose status shifts as they reach the age of eighteen.

Parliament is bypassed all the time in the interests of the ruling establishment. We just aren’t usually ‘informed’. The timing of this announcement is a cynical divide-and-rule measure on behalf of the British Government. Split opposition, thereby neuter that opposition.

Isn’t it time for us to fight for change, rather than maintain the rotten status quo?

Linkedin
RELATED ARTICLES
OTHER ARTICLES
Huge public pressure has forced European governments to respond to the global refugee crisis. But for the three thousand people living in deplorable conditions in The Jungle, relief is a long way off.
Organisations like CalAid, Refugees Welcome and the thousands of Icelanders offering their homes to displaced people, are doing more than responding to an international emergency, they're building a better Europe.
The lack of government humanitarian support and incendiary media coverage has prompted ordinary people to go to Calais and help out any way they know how.