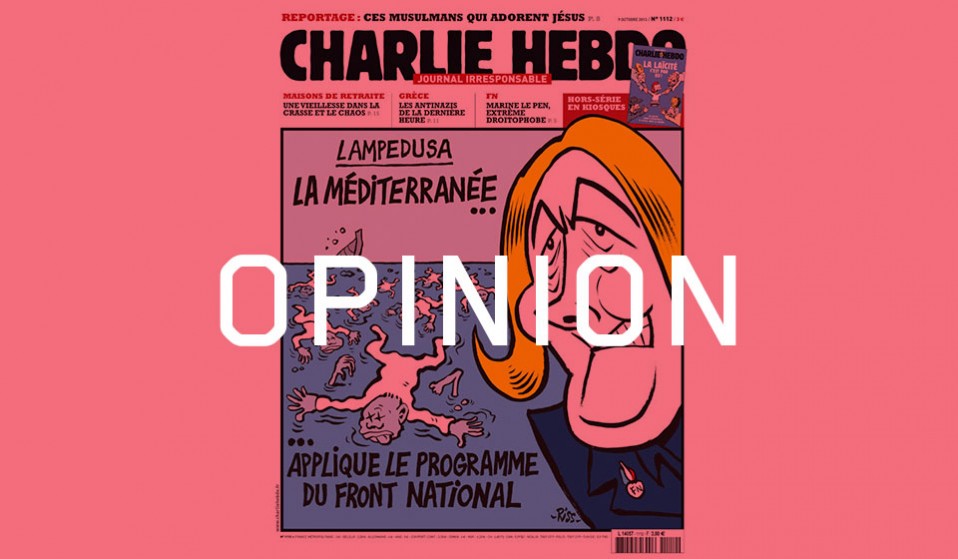 The murder of 12 people at French newspaper Charlie Hebdo on January 7 was not the act of a world-conquering empire. Beware the man - or woman - who tells you otherwise.

The murder of 12 people at French newspaper Charlie Hebdo on January 7 was not the act of a world-conquering empire, says Tetsuhiko Endo. Beware the man - or woman - who tells you otherwise.

Last week I had a moment of sympathy with terrorists. When hackers intimidated Sony into limiting the theatrical release of The Interview, a movie chock full of tired Asian stereotypes, the very first thing that occurred to me was, “Ha! Fuck you, James Franco and your tired brand of white-dude humour”. It further deepened my smirk to find that one of the world’s biggest companies – apparently shot through with racists, if the leaked emails mean anything – was laid low by a group of computer hackers from North Korea, a country that can’t even keep its electricity on.

My smirk turned to horror yesterday as I watched, almost in real time, as gunmen walked into another media company – Parisian satirical newspaper Charlie Hebdo – and gunned down 12 people who make their living in a similar way that I do.

How to respond? After the blanket recriminations, the public expressions of horror and condemnation, the whispered (and shouted) suggestions that Islam is a religion of violent wackjobs, and the quotes from whichever token muslim talking head is closest to his or her computer that “no, we do not all support sociopathic killing”, how do we chew on this sort of heinous massacre and not choke on the horror of men with swords killing men and women with pens?

The injustice of such an act is beyond my abilities to address as a writer, but in my smouldering rage the one idea I cannot countenance, one I have heard again and again recently, and will no doubt hear even more now, is that our ‘liberties’ are under threat. There is no doubt that in some countries Islam is an oppressive apparatus but its power to limit the scope of human expression has no bearing on what appears in the mass media of America and Europe. These countries – the leaders of the free world – have spent the last 15 years waging an international pogrom against Islamic peoples in places like Iraq, Afghanistan, and of course Gaza. If the nefarious powers of extremist Islam had any real power to scare us into toeing their party line they would have at least had us calling shit on propagandist cant like “The War on Terror”.

No, they can’t even make us tell the truth about all the things we have done in the Middle East, much less coerce us into pushing their own message. What the Sony hack and yesterday’s atrocity have in common is that they are both the actions of seriously deluded, and essentially powerless people. Of all the ways to hurt America and help his own country, Kim Jung Un delayed the release of a B Movie. Of the scores of different types of discrimination that French Muslims face on a daily basis, the killers in Paris targeted a comic strip. Their horrific buffoonishness is itself the stuff of satire.

And so in the coming days, as the beat of the jingoistic drums grows louder, as the debate swirls about how ‘we’ (as if it’s ‘us’ against ‘them’) should respond to this threat to our vaguely defined liberties, remember this: What we all watched in Paris was not the political act of a growing Islamic power, it was no more political than the lynch mob or the Blackwater mercenary wiping out a street full of civilians in Iraq. It was the twisted act of the blunt force tools of a broken and nihilistic ideology – extreme Islam – that makes no more sense to its founders than it does to its foot soldiers.

There is no logical, world-conquering ideology behind men with Kalashnikovs, not in any country, not in any language or religion. There are only two types of people who it behooves to believe and disseminate such a preposterous lie: The first are the terrorists themselves because a real ideology beyond base hatred would justify them as something more than sociopathic killers who get less able men to do their bidding. As it is, they are so bent they cannot even shrug off a bad joke in a French-language satire rag.

The second is the industry of politicians and pundits who are, as I type, crawling out of their dark warrens to feed on the acts of these despicable men: the presidents and police, the talking heads and media tycoons who varnish massacre with the sticky spittle of their own agendas. Why? Because an evil empire lurking in our midsts trying to take our freedoms justifies them as well: It justifies the oil wildcatting in Iraq. It justifies paper sales and TV ratings. It justifies the indiscriminate drone bombing of Afghani villages full of children. It justifies the policing of Paris’ outer arrondisements like an occupying army.

This is the path we march, holding our new martyrs before us as the twisted souls behind this attack hold up their prophet before them. The satirists who dedicated their lives to lampooning of all facets of a society deserve better than being yet more kindling for Europe’s already formidable anti-Islam/anti-immigration movements. The isolated attacks of madmen cannot destroy societies as rich and pluralistic as those of western Europe, but polarisation and fear mongering by those who refuse to begin the difficult dialogues necessary for life in truly multicultural societies are already tearing them apart from the inside out.

Linkedin
RELATED ARTICLES
OTHER ARTICLES
Sean Maung’s photos are a love letter to the Black and brown communities that make up New York.
Yesterday thousands gathered outside Buckingham Palace after news of the Queen’s death broke.
Rhiannon Adam spent three months capturing an ageing society wracked by division, isolation, and the aftermath of scandal.
As the Scottish government announces a rent freeze, an activist with Living Rent who fought and won shares how they did it, and what must come next.
With skyrocketing rents, packed out viewings, bidding wars and more, renting in London has never been harder.
By turning a real-life crisis into daytime television fodder, TV bosses have once again shown themselves to be completely out of touch with audiences.