News & Politics / Opinion / How can we stop the Charlie Hebdo attacks deepening divisions? 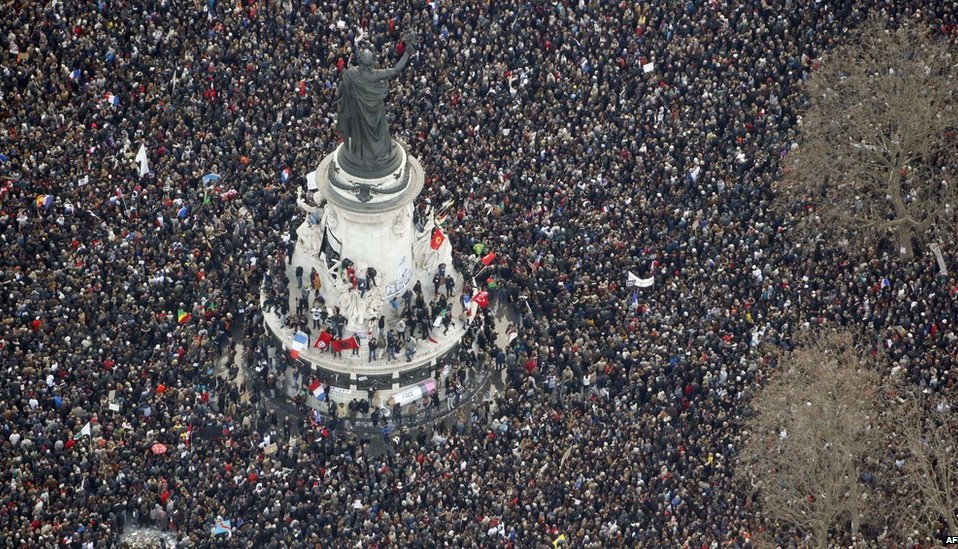 In the wake of the Paris shootings, Huck asks how we can come together to move beyond hatred.

In the wake of the Paris shootings, Huck asks how we can come together to move beyond hatred.

Reactions to the horrific attacks at the Charlie Hebdo offices in Paris have come thick and fast. As rhetoric intensifies across Europe, mosques around France have been attacked and Germany’s Hamburger Morgenpost was firebombed after reprinting the Hebdo cartoons. The current display of unity and condemnation could be short-lived as extremists, whether the far-right or radical Islamists, seek to capitalise on the fear and outrage in the wake of the attacks.

Marine Le Pen of France’s far-right Front National is likely to be a major beneficiary explains James Shields, Professor of French Politics and Modern History at Aston University. “At the moment we’re in a phase of political unity, and there’s cross-party condemnation of this atrocity but that will pass,” he says. “When it passes the old political divisions will open up again. The one party that stands to gain from this is undoubtedly the National Front (FN), simply because this is a party which has at its core an anti-immigration, anti-Islamist agenda.”

As Mathieu Kassovitz’s 1995 film La Haine – which artfully highlighted the simmering social and racial tensions on Paris’ marginalised banlieues – reminded us: “La haine attire la haine!” or “hatred breeds hatred”. But it doesn’t have to be that way. In search of a more positive message, Huck reached out to artists, activists and community leaders to ask: “How can can we stop the Charlie Hebdo attacks deepening social divisions?”

Jean Jullien,
French Illustrator
“I think now more than ever we need to make a distinction between these armed maniacs and the Muslim community. Now is a time of unity, a time of solidarity. A time to say that whoever you are, whether you’re a believer or not, whether you agreed with Charlie Hebdo‘s mission or not, wherever you come from: if you stand for freedom, we stand with you.

In a way, for me, Charlie is just the begining. It’s not about cartoonists, it’s about anyone’s freedom. If you let gun-toting murderers get away with this massacre, who’s next? A writer (Salman Rushdie for example), musicians, directors, actors? And it’s not just about Artists. Art is just the creative representation of society, if we let it be intimidated, we let ourselves be.

Whether you agree or disagree with Charlie Hebdo‘s extreme satire doesn’t matter much, this is about living together and accepting differences of opinion. These cartoons offend you, fine, sue them! Or reply with a cartoon. But replying with cold-blooded murder is just plan cowardice.

I think and hope that this will make us all realise that hatred and division is what started this tragedy; and that standing tall together, not falling for amalgams and bigotry, is the only way forward.” 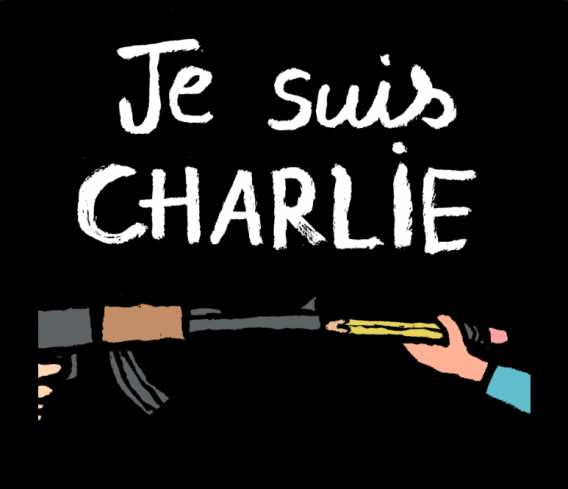 Imam Suliman Gani
South London Imam, formerly at Tooting Islamic Centre
“The Muslim community condemns these acts, are moved emotionally and understand that this paper’s right to print these images can in no way affect the personality of the Prophet Mohammed. The actions of these individuals has nothing to do with the teachings of Islam.

With so much media coverage there is a risk that people will look suspiciously at all Muslims. The Muslim community would like to peacefully coexist and the actions of a minority should not create discord among peaceful people. People who have direct contact with Muslims on a day-to-day basis will understand this.

But I am fearful of people who don’t have any contact with Muslims and get their information only from the media – which can help fuel Islamophobia and increase community tensions. I disagree with giving a platform to radicals like Anjem Choudary who don’t represent the Muslim community. The media should be speaking to mainstream Imams who will defend freedom of the press and condemn these despicable acts.”

Marc Nammour
Rapper in La Canaille, a politically conscious Frence hip hop group
“The best way to defeat Islamophobia and increase understanding is through culture, education and curiosity. Continuing to be satirical is very important too, because a society without satire is going to die – it will become a dictatorship. The best way for us to honour Charlie Hebdo is to continue their struggle. They were very politically conscious and fought above all for freedom of expression and against religion, capitalism and racism. We can’t forget that.

For me, the big rally that happened in Paris on Sunday was nonsense. On the night of the attack I went outside and it was very emotional and free of politics. It was just the people, for the people. On Sunday it was all about politics and included people like Nicolas Sarkozy, Benjamin Netanyahu and Russian Foreign Minister Sergei Lavrov who were always against that newspaper and freedom of the press. We can’t collaborate with everyone just because they say ‘Je Suis Charlie’ and forget about their actions and their political ideas.”

Mike Jervis
Works with young people at risk of radicalisation at the Active Change Foundation in Walthamstow.
“The far-right and other extremists will jump on this because that’s what they feed off. It’s about recognising that there will be fractures. From our perspective, communities have to got to stand together. The only way they can stand together is to understand that grievances exist deeply in the community but we can’t let these extreme acts distract us from building our communities. We need to always be aware that these events give opportunities for other extremists to exploit.”

Fred Mortagne aka French Fred
French filmmaker
“It’s important to aim for the clearest vision possible. To reach this goal we shouldn’t observe with just one point of view. It’s important to step back and look beyond our own small world. We need to look forward: the world is rich and complex. The reality for each person can be very different. We should try to be as open-minded as possible, think critically and – more than ever – keep communication with others open. Talking, exchanging and debating will prevent you from getting stuck in thought that would be too limited or restricted.”

Baptiste Bouquin
Musician in French jazz band Surnatural Orchestra
“Sarkozy announced yesterday the beginning of the civil war in France and that ‘our civilisation has to defend itself’. Since the presidential campaign in 2002, the themes of “insecurity” and “national identity” have been used by the right-wing and there has been a hostility towards Arabic and Islamic popular culture. All of that is very worrying. We all feel very concerned. During the coming years we fear we will have to live in a society that is overprotected by the police. We know we will have to put a lot of energy into fighting against the anti-Arabic racism which is only growing stronger.”

Benjamin Deberdt
French skater, photographer and editor at liveskateboardmedia.com
“You could narrow it down to one Commandment: Thou shalt speak to thy neighbour. This is when you realise that despite all social differences and boundaries, completely different tastes in food, music and hair cuts, they are pretty much just like you… Just facing this and talking it through is a great way start to living together.”

Linkedin
RELATED ARTICLES
OTHER ARTICLES
Fox News commentator suggests Birmingham is a no-go zone for non-Muslisms and Twitter reacts in the best way ever.
The murder of 12 people at French newspaper Charlie Hebdo on January 7 was not the act of a world-conquering empire. Beware the man - or woman - who tells you otherwise.
Illustrators and cartoonists around the world rally around to show solidarity for those murdered at Charlie Hebdo magazine offices in Paris.