News & Politics / Opinion / Keep it in the family? The left can do better than dynasties 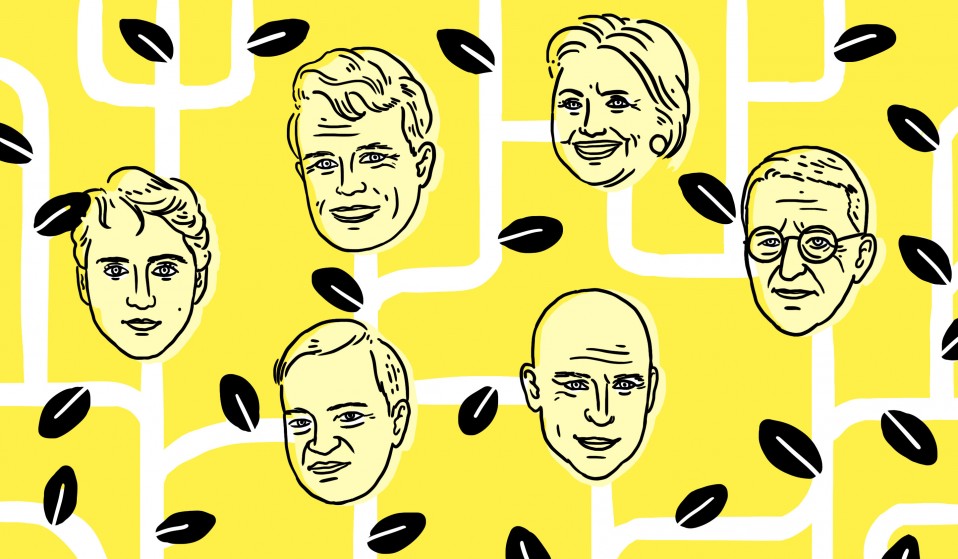 From Clinton to Kinnock, Trudeau to Benn, the fact political dynasties dominate progressive parties on both sides of the Atlantic is an embarrassment, writes Dawn Foster.

From Clinton to Kinnock, Trudeau to Benn, the fact political dynasties dominate progressive parties on both sides of the Atlantic is an embarrassment, writes Dawn Foster.

Following American politics in the Trump era remains a constant drudgery of bizarre, ranting tweets, endless falsehoods flying out of the White House and political decisions that will transparently turn out to be calamitous for the majority of ordinary people. So no surprise that the media rush towards any shaft of light they spot in the hope that some new development can challenge Trump while the Democratic Party are struggling.

In last week’s State of the Union address from Trump, the news senator Joe Kennedy was planning to deliver the Democrats’ response to Trump’s speech provoked that excitement: he’s young, several of his speeches have gone viral in an age where politicians clunkily try to engage millennials, and of course, he has an instantly recognisable surname.

Kennedy’s surname rings a bell for people with only the loosest grasp of politics in the last few decades, hailing as he does from perhaps the biggest political dynasty in the United States. The excitement building around Kennedy seemed less to do with his previous form and delivery, but the stardust and projected expectation bestowed upon him by the family name. Decades of myth-making and historical and emotional memory around the public figures in his family loaded expectation around Kennedy’s response.

The actual delivery turned out to be passable but not barnstorming, by all accounts. Yet almost immediately, Kennedy was talked up as a potential candidate for the Democrats in 2020, with Politico headlining a piece “Kennedy may be the Democrats’ best hope (but may not want to be)”. That less than a year and a half after the 2016 election, the US is already falling back on candidates from political dynasties should give anyone on the left pause. The US has a habit of producing political families, including the Kennedys, the Clintons, the Bush family, the Cheneys, Rand and Ron Paul, and now Mike Huckabee’s daughter is the White House press secretary. Over the border in Canada, Justin Trudeau may have been inspired to run for prime minister by his father, Pierre Trudeau.

The UK is far from immune: the Johnsons (admittedly, not of the left) have two current MPs in the family, and the father of Jo and Boris, Stanley, has stood unsuccessfully as an MP both in a seat and in a selection. Elsewhere, countless families keep popping up in political life: the Benns, Kinnocks, and Milibands are well known, and in Scotland, Anas Sarwar inherited his seat from his father, Mohammed. At the end of January, John Prescott’s son, David, failed to win selection for a seat in Mansfield.

Political families then, are everywhere. It’s perhaps unsurprising: exposure at a young age to the possibilities of power and workings of politics are likely to encourage people to follow in family members footsteps. What’s wrong with being inspired, and who would want to dictate to an individual which jobs they can pursue? But the problems with dynasties and familial politics are manifold. Defenders of dynastic politics argue merit is the only contributor to political success: but the prevalence of relatives in politics suggests otherwise.

Knowing a politician closely means you’re very likely to have access to their contacts and networks. Having a relation who has won an election at some point gives you extant knowledge of how to fight a campaign, and the quirks and oddities that might not otherwise be known to you.

Yet it also diminishes the social experience and backgrounds of the politicians who serve us. It appears as an outsider, and from speaking to people in Westminster, to be a good measure easier to get closer to selection and power if you know the right people. Electing endless lines of family members homogenises the class background of the political class and prevents others breaking into politics.

But there’s also another issue, and one that Hillary Clinton encountered. While sometimes name recognition helps when it comes to running for office, it can have the opposite effect. Fear and resentment of elites is increasingly prevalent as we enter a protracted stage of political instability. Clinton was rejected by many people on the right and left, as well as swing voters, for seeming to expect the presidency: as though she deserved it, and she viewed power as something handed between elites. Similarly, the selection of the sons and daughters of MPs can stick in the craw of many, seeming nepotistic and presumptuous, taking power and representation for granted.

We expect this behaviour from the right: the obsession with lineage and heritage extends into making sure your offspring get into whichever professional role they fancy, including political ones. The Conservatives and Republicans aren’t interested in opening up access to power and decision-making. They believe money flows to those who deserve and have earned it, and the fact those in the best schools and most well-remunerated jobs were rich to begin with is not evidence of structural inequality but a culture of hard work amidst the wealthy.

But the left should feel intense discomfort at dynastic politics. A society which time and again sees the sons and daughters of previous MPs ease into seats is not healthy or egalitarian. Ideally, the representatives of a political party on the left should be representative of the make up of society as a whole, instead of resembling a Bring Your Daughter to Work Day. Returning again and again to the families of existing candidates to replenish the stocks does little to persuade the public politics isn’t a closed shop.

Family members may well want to go into politics, but hundreds more people without familial and social connections also do. That the dynastic problem crops up so often amongst left candidacies suggests it’s more than a coincidence, and instead a structural benefit to have a relative in politics. It shouldn’t be: any appearance of nepotism is anti-progressive and hinders equality.

The political climate is unstable, and anger around inequality is growing. In such a climate, it becomes impossible to defend the dynastic tropes of the Western political parties. Politics should be more representative, broader, and open to far more people. You don’t reach that point by handing power down through families like heirlooms.

Linkedin
RELATED ARTICLES
OTHER ARTICLES
Theo McInnes’s photos of the annual event provide an intriguing snapshot of contemporary Britain.
Following the release of his debut single, Deyaz talks battling addiction, dealing with his struggles through music, and building a budding music career from his living room.
A new law change is enabling Britain’s donor-conceived children to know the truth about their origins – but campaigners say the fertility industry must do more to protect people.
Activists and campaigners are fighting back against new laws that would seriously undermine the ability to take industrial action, calling it an attack on fundamental workers' rights.
AI companies that develop image-generators using copyrighted artwork from the internet are coming under fire from artists who say that it amounts to theft.
A new podcast is opening up the conversation between trans women and trans amorous men in the hope of building coalitions.