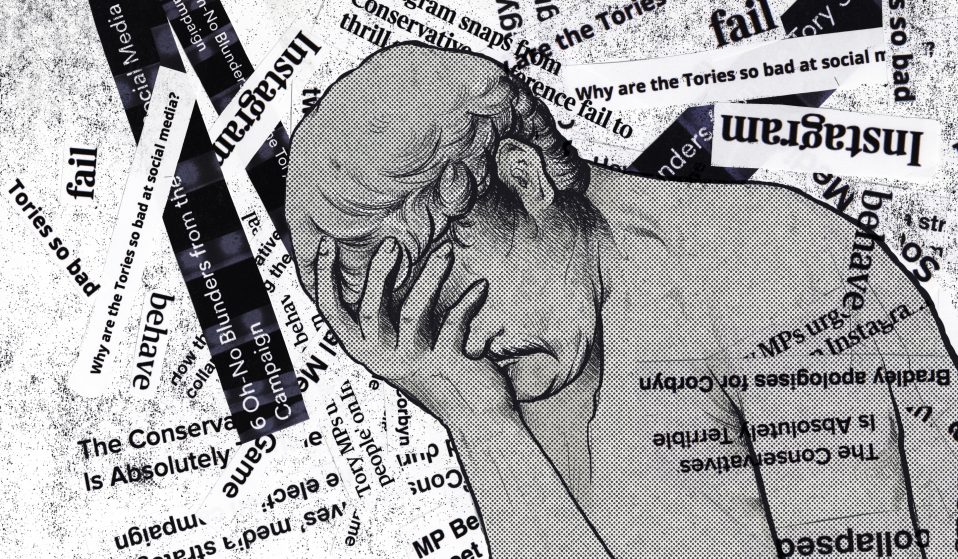 Following Amber Rudd’s recent Partridge-esque Twitter video, we revisit some of our favourite examples of the Conservative Party being awkward on the internet.

The Conservative Party are not very good at social media. Following Amber Rudd’s recent Partridge-esque Twitter video, we revisit some of our favourite examples of Tories on the internet.

By now, it’s no secret that the Conservative Party has struggled to truly harness the power of social media.

In February, it was revealed that Tory chairman Brandon Lewis was hiring an army of paid tweeters to help combat their shortcomings online. Similarly, reports of Instagram training sessions – in which MPs were encouraged to use their accounts to act like “real people” – began to surface a few months later.

And so begs the question: Have these attempts to address Tories’ various deficiencies on social platforms been successful? No! No, they absolutely have not!

Last weekend, former Home Secretary Amber Rudd shared a video on Twitter, in which she, flanked by seven other people, stood on Hastings Pier and called out Shadow Chancellor John McDonnell for recent comments he’d made about the area being “left behind.”

In just over two minutes, Rudd and her nameless septet manage to perform a Greatest Hits set of Bad Content, in which they stand – huddled, like the cast of Entourage, if Entourage was even more shit – and contest McDonnell’s points. Thrilling, it is not.

Anyhow, to celebrate it’s awkwardness, here are some of our favourite examples of the Conservative Party on social media.

Remember Activate? Yes, you remember Activate. Intended as an organisation to rival Momentum, the Tory-supporting youth group endured a brief spell in the spotlight: they turned up, did a bad few memes, before disbanding after members were caught joking about ‘gassing chavs’ in a series of leaked WhatsApp messages. Nice! 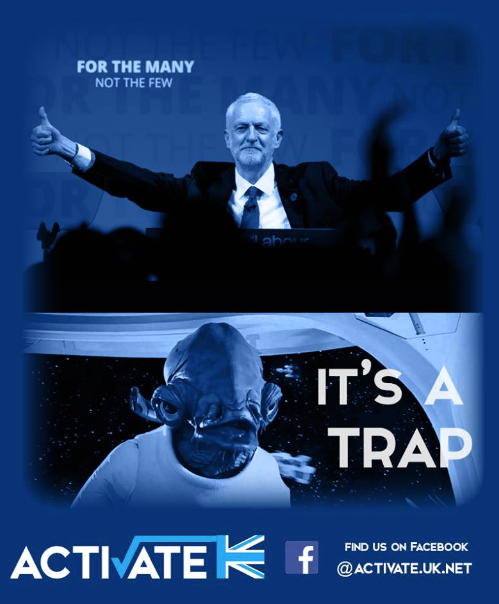 [*Clears throat*]: You’ll get accountability! With Conservative delivery! Make sure this time you get it right! Vote for Greg Knight! [*returns to cryogenic chamber*]

Gavin Williamson is the intern that refused to leave. “Heading off soon, Gav?” you ask, but he just rolls his eyes and laughs it off. It’s been two years now, and he’s started wearing a suit to the office. One morning, you come in and he’s sat at your desk. Next week, he’s the Defence Secretary.

“Is Gavin still sleeping in the store cupboard?” a civil servant queries. “I think so,” you reply, vacantly scrolling through his Instagram – a painful archive of meetings, meals and photographic evidence that he has drunk beer on at least two occasions – as he delivers a presentation to your team. “Why has he uploaded a photo of his lawnmower?” 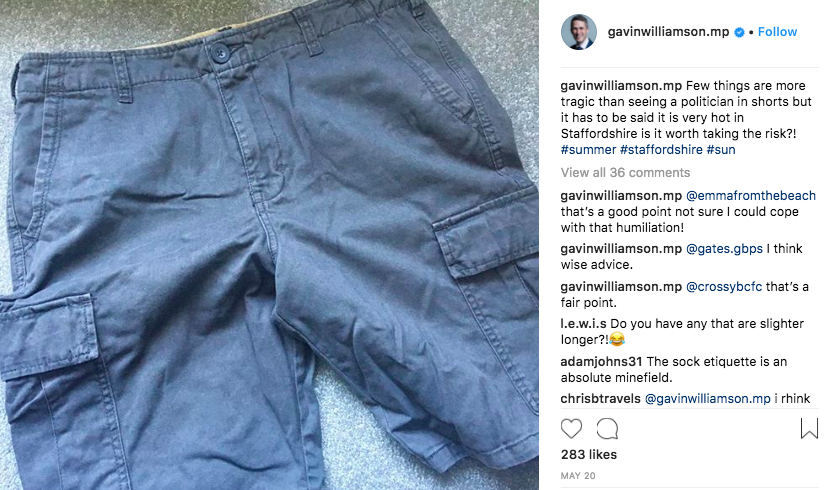 Pro: Ben Bradley is responsible for one of the most retweeted posts by a British politician, ever!

Con: It was a grovelling apology for a defamatory tweet! Against Labour leader Jeremy Corbyn!

On the 19th of February I made a defamatory statement about @jeremycorbyn. I have apologised to Mr Corbyn and here is the complete text of my apology. Please retweet. pic.twitter.com/6JZc8O9E82

At the beginning of the year, Conservative HQ upped their Instagram presence for their Annual Party Conference, so that users could get a behind-the-scenes at all of the fun going on backstage.

The problem was, there was no fun was going on backstage. Never has a place been depicted in such a way that fun – which doesn’t even sound like a word anymore – has seemed so devastatingly unattainable. Highlights included: Jeremy Hunt sitting down [ends]. 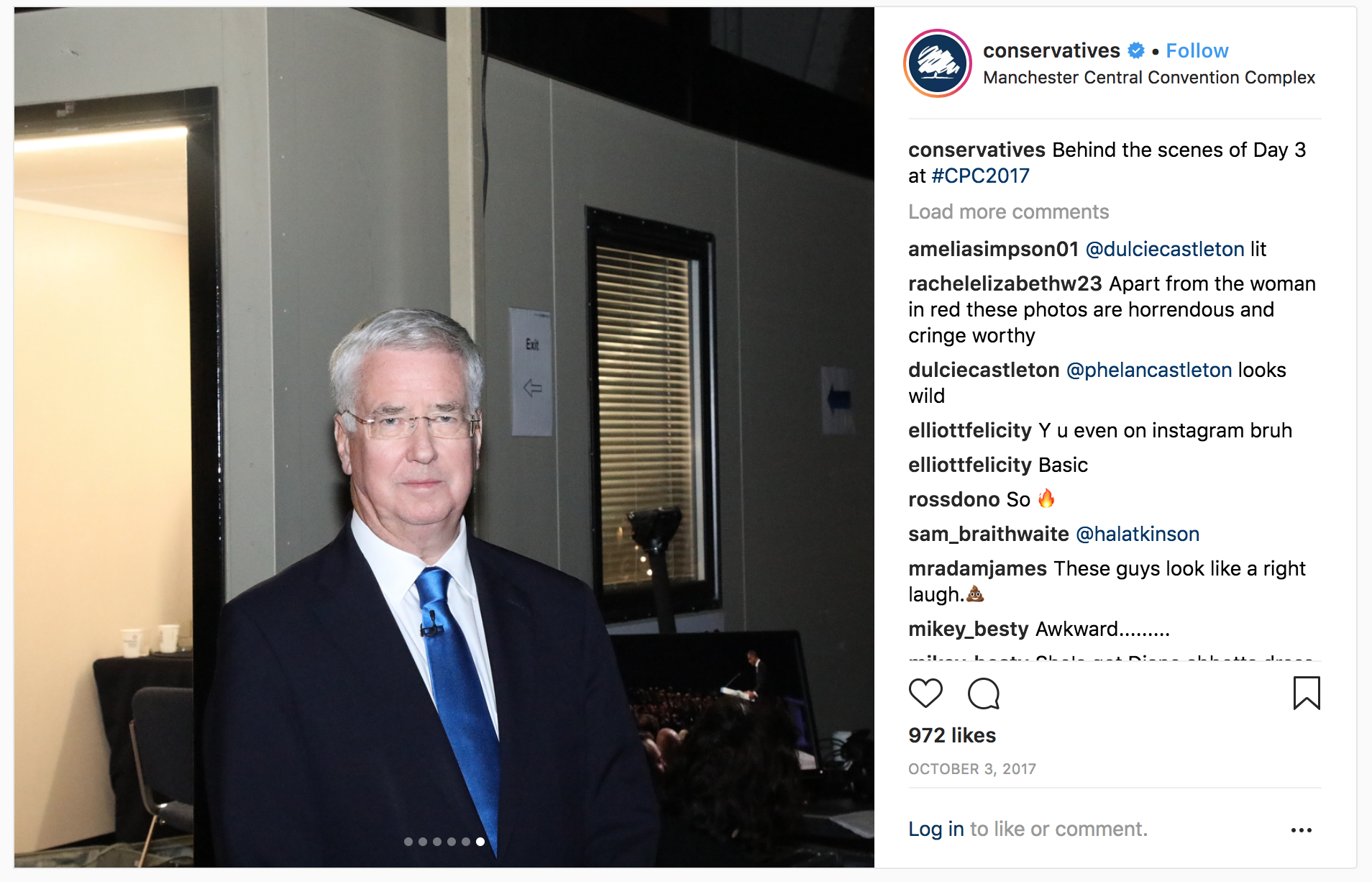 Picture the scene: Sunday morning, you and your significant other, draped on the sofa, catching up on Love Island.  “Why do you keep checking your phone, babe?” It’s nothing, they say. “Just reading.”

Except they are not just reading. They are on the Matt Hancock App, a social platform that shares photos and videos of its titular hero, as well as allowing users to ‘friend’ and chat with each other. Look, they are connecting with fellow West Suffolk constituents, right under your nose.  Look at you, stupid, you’re losing them. You are losing them to Matt Hancock and his Matt Hancock app. They are engaging with like-minded users on issues and policy and there’s nothing – nothing – you can do about it. 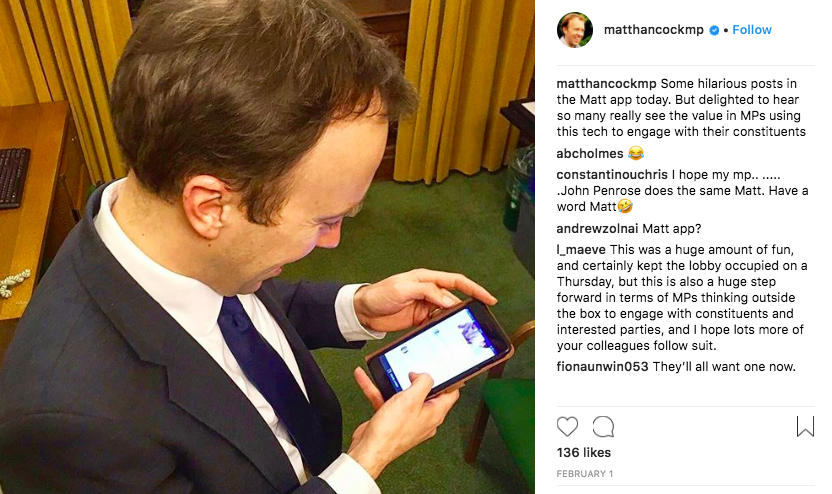 Hindsight, am I right guys!

Britain faces a simple and inescapable choice – stability and strong Government with me, or chaos with Ed Miliband: https://t.co/fmhcfTunbm

Linkedin
RELATED ARTICLES
OTHER ARTICLES
Finland-born photographer Sirkka-Liisa Konttinen looks back on her decades-long documentation of life in Northern England.
In the latest instalment of Photographers in Conversation, the chronicler of raves, protests and beyond explains why he’s drawn to such specifically visceral environments.
The author discusses the all-consuming nature of heartbreak, and turning the experience into an incisive exploration of love and loss.
A new edition of a seminal book brings together iconic images of the band onstage in their full glory and backstage in moments of unguarded camaraderie.
Over a dozen Stop Deportation activists locked themselves to each other outside a detention centre to prevent coaches taking those due to be on the Rwanda deportation flight from leaving.
Photographer David Hoffman recalls documenting the extreme wealth inequality around Tower Hamlets and Hackney int the 1980s.