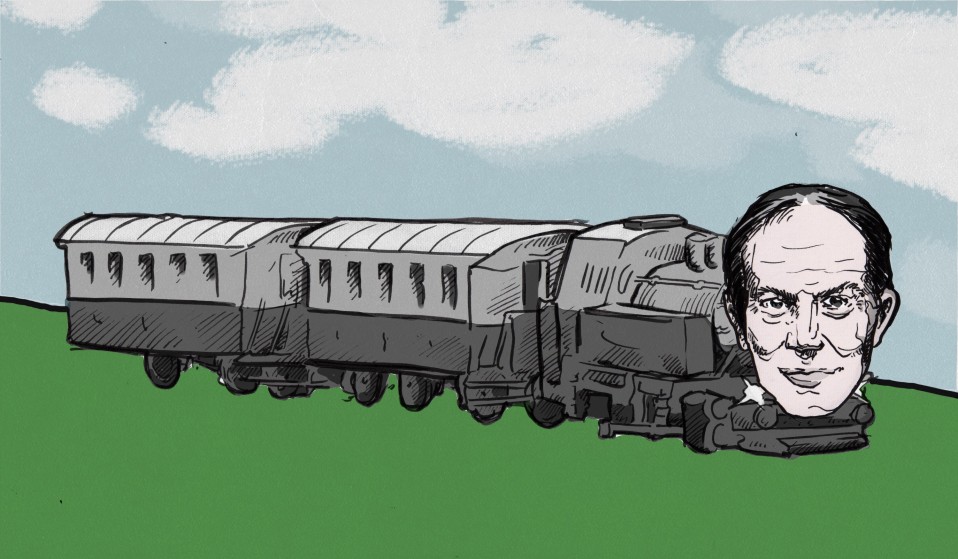 The left and right are borderline obsessed, but no corner of British politics has a more warped view of the humble train than the centrist.

To the right they’re a proud symbol of empire, to the left an emancipatory vehicle to a utopian socialist future. But no corner of British politics has a more warped view of the humble train than the centrist, argues Tom Whyman.

Consider for a moment the humble British train. Creaking along its tracks through town and country – from our cities, cramped and grey, to the provinces, rotting with the stench of dead human potential; its ageing stock snazzy with re-upholstered seats and talking toilets, its smiling customers all-too-happy to find themselves £68 poorer for the privilege of leaning on their luggage in the corridors. When you think of the train, what most obviously springs to mind?

If you are British, then where you fit on the political spectrum today can largely be defined by your attitude towards trains. For the right, the train is the grand symbol of Empire, to the point that it seems nowadays like it was the guiding principle behind the whole endeavour. Economic exploitation? Pfft. Political oppression? Excuse you. Irreversible cultural damage brought about by the arrogant racist presumptions of the criminal English ruling classes? I don’t even know what those words mean!

Meanwhile if you are on the left, the train must be seen as representing a sort of promise. Right now, our trains are really terrible – the worst in Europe, the least reliable and the most expensive by some margin. But somewhere within our trains lurks the spirit of utopia.

The real problem is that in contrast to Europe, our railways are privatised – run in order to generate profits for billionaires like Richard Branson, or possibly also the state-run railways of other European countries. But once Jeremy Corbyn becomes Prime Minister, he will re-nationalise the railways, and suddenly our world will be transformed. A cheap and regular service will criss-cross the country, from Truro to Thurso: free to chug along merrily on it all day, our lives will finally be good again.

The centre, by contrast, has no truck with either of these flights of fancy (although, as ever with the centre, especially not the left’s one). The political centre, today, can largely be defined by its antipathy towards trains. In this sense, the centre’s leading intellectual light must be the journalist James Ball, who has begun to make something of a tradition of spending every ‘rail fare price rise day’ (each January) “reminding” people  on Twitter that actually, investing in our railways is regressive because it only serves the interests of middle class.

An article published by Ball today on politics.co.uk sets out the centrist case against trains in a more systematic way. His argument, such as it is, is as follows: trains, at present, are used far more by ‘the wealthy’ (defined as the top 20 per cent of earners, who are likely to have office jobs and live in the South East) than ‘the poor’ (defined as the bottom 40 per cent, who are likely to do manual work and live in Wales). Freezing or cutting rail fares would therefore help wealthy voters, not poorer ones.

Of course, Ball realises, it could just be that poorer people prefer to use other modes of transport (such as buses) precisely because they are cheaper, so cutting rail fares would mean poorer people used trains more. But this wouldn’t work, Ball thinks, because rail fares are already so high that any cut significant enough to boost passenger numbers among the poor would require a big taxpayer subsidy to bankroll it. But even this wouldn’t spell the end of our difficulties, since the rail network wouldn’t be able to cope with increased demand without significant further investment.

You think this is bad enough? Think again. Because, it turns out, even the act of investing in our rail network spells bad news for the impoverished – since, as Ball points out, when a new train station is built in a town, house prices rise accordingly, pricing out poorer residents (I think this argument might also work against slum clearances?

Good quality housing is not used by the poor- bringing down rents is a sop to the middle classes. Supposed “”””socialist”””, Jeremy Corbyn, should focus on building slums

Ball’s argument then kind of pivots to try and show that, in comparison with Europe, our rail fares aren’t even ‘that’ high if you book in advance and try not to travel at peak times (which I suppose he wants to use to prove that the lack of enthusiasm for train travel amongst the poor really is a matter of mere cultural preference, as opposed to economic rationality? I don’t know). He closes by suggesting that Labour, if they really want to help the poor, ought to focus on investing in bus transport instead. I’m pretty sure their manifesto did.

Of course: both the caricatures of the ‘right’ and ‘left’ attitudes towards trains I have sketched above are, in their different ways, fantasies. The British Empire was not a fun club for nice boys who liked trains; nationalisation will not solve all our problems by itself. But what is striking about the centrist case against railways is that it is equally fantastical: it’s just a fantasy that happens to disguise its delusions behind a lack of libidinal appeal.

There are two key fantasies that we can detect at work behind Ball’s argument. The first is the fantasy of Londoncentricity. Ball’s argument only really works if we assume that everywhere in the country is like London and its environs. The comparison he makes between rail use in the South East and rail use in Wales only makes sense if equal numbers of people are able to get the train (or indeed a bus).

Poorer people can only be said to ‘prefer’ buses if they have the option, as in London, of getting a bus or a train. As should hopefully be obvious, this is simply not true everywhere – and of course if you happen to live somewhere with a functioning railway network but no good buses, this does not automatically make you ‘middle-class’ and therefore easily able to absorb any fare hikes.

Moreover, Ball’s argument that a Labour government should prefer to invest in bus transport only makes sense if we assume that it would be logistically easier to invest in the bus network than the rail network. But you only need to escape London for somewhere as alien to it as Birmingham – which lacks a real metropolitan railway network, and is largely reliant on buses, easing at aching length along the cramped arteries of its roads – to see that this isn’t the case.

The second fantasy is that of the permanent present tense. In a bunch of different ways, Ball’s argument assumes that if something is currently the way it is, then it will – when placed under different material conditions – somehow continue to be like this. Thus is someone is currently poor, then they always will be – so there is no point investing in poorer areas, since it would only conceivably benefit the middle-class people who’d displace them.

If the rail network would currently require heavy public investment in private, profit-making enterprises, then it always will do – so we shouldn’t even bother. This delusion, very common amongst centrists (who are also fond of using it to make arguments against, for instance, free hospital parking – treating it as a zero-sum game weighted against cancer treatment, is particularly odd since it entails that social reality is largely intransigent to the actions of human individuals, which is a fact they can’t possibly have observed going about their daily lives. I assume they must have read somewhere that this is how reality works in a book.

But if when it comes to trains, all we can do is fantasise, then we may as well dream properly. This is where the left case for nationalising – and then investing heavily in – our railways clearly becomes materially plausible. A proper transport network would help unlock all the wasted human potential currently festering untapped in the middle of nowhere, unable to get to the opportunities that would give its life meaning; it would breathe new life into all the many cities in this country which are not London, possibly even de-centralising our politics.

Yes, constructing such a network might be expensive: but this is why they call it ‘investment’. When it comes to having a proper transport network, the dividend in human life in this country would be substantial – and start to pay itself back pretty much immediately.

When we dream of trains, it is this image that we ought to conjure up – a fantasy preferable to those of imperial nostalgia, or ascetic centrism.

Linkedin
RELATED ARTICLES
OTHER ARTICLES
Photographer Becky Tyrell went down to the fading banger and stock raceway to meet a community desperate to keep it alive.
A recent High Court ruling against the right to wild camp in Dartmoor National Park sparked the largest land protest in history – and campaigners say their fight is not over yet.
Filmmaker Laura Poitras discusses her new documentary which traces the remarkable life of the artist-activist and the impact of her battle against the US opioid crisis.
A new law change is enabling Britain’s donor-conceived children to know the truth about their origins – but campaigners say the fertility industry must do more to protect people.
At his West Bank restaurant, Fadi Kattan established himself as the voice of modern Palestinian cuisine. Now, he’s bringing his innovative, bold flavours to the UK’s capital.
AI companies that develop image-generators using copyrighted artwork from the internet are coming under fire from artists who say that it amounts to theft.