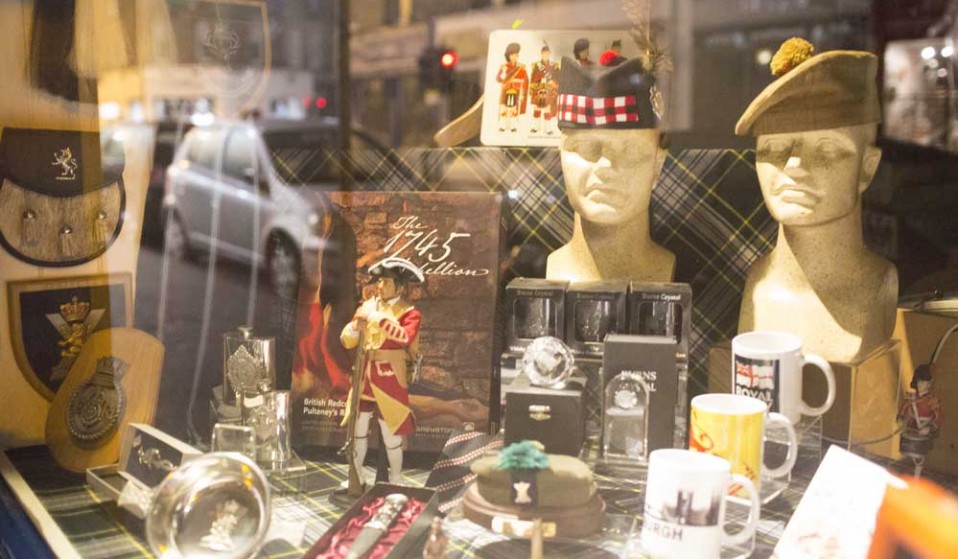 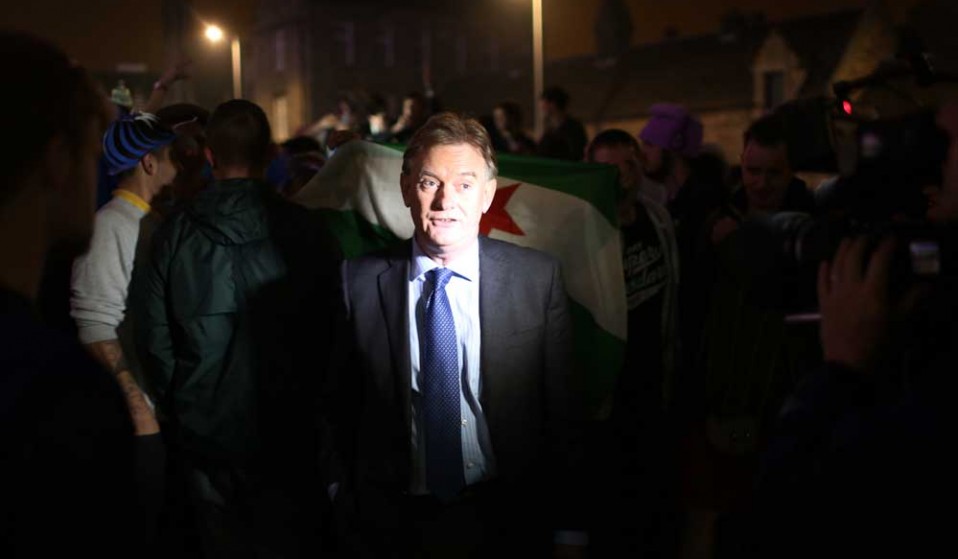 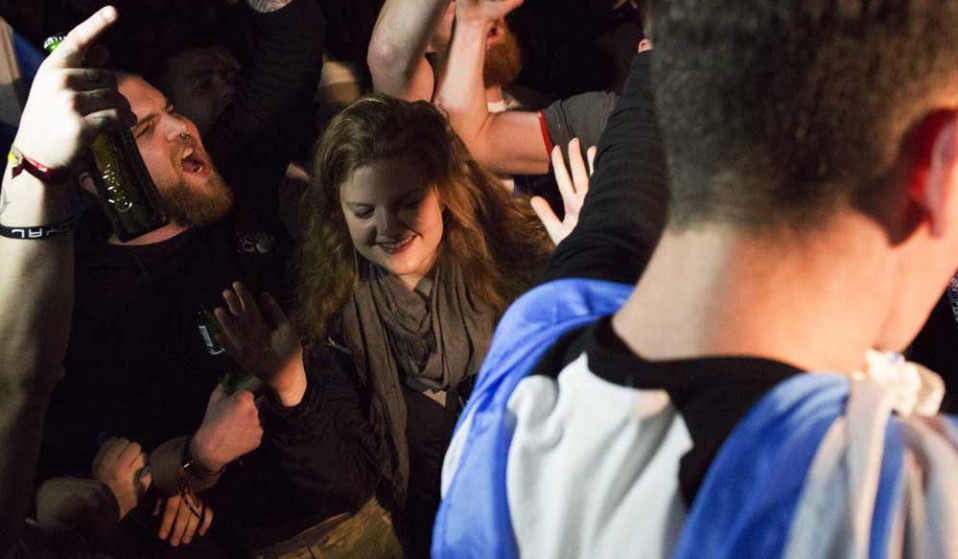 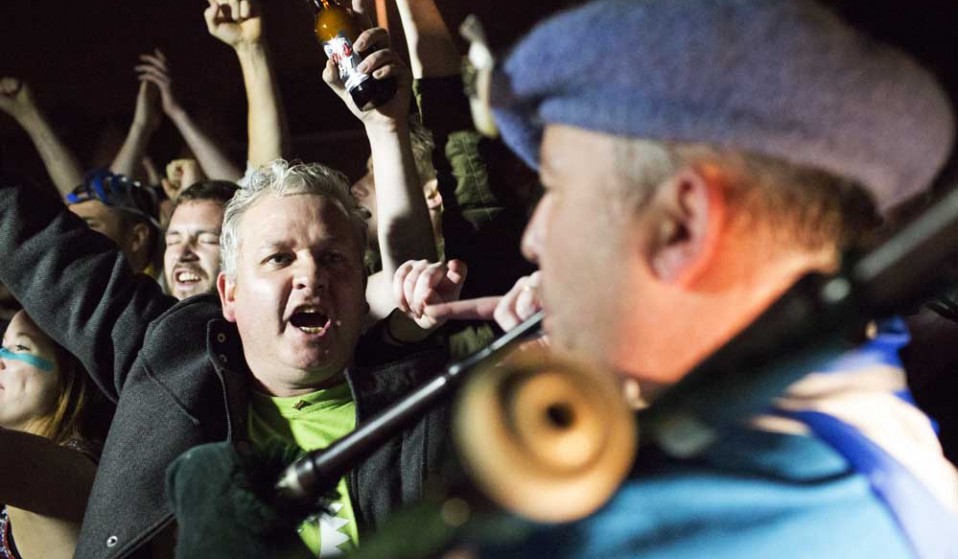 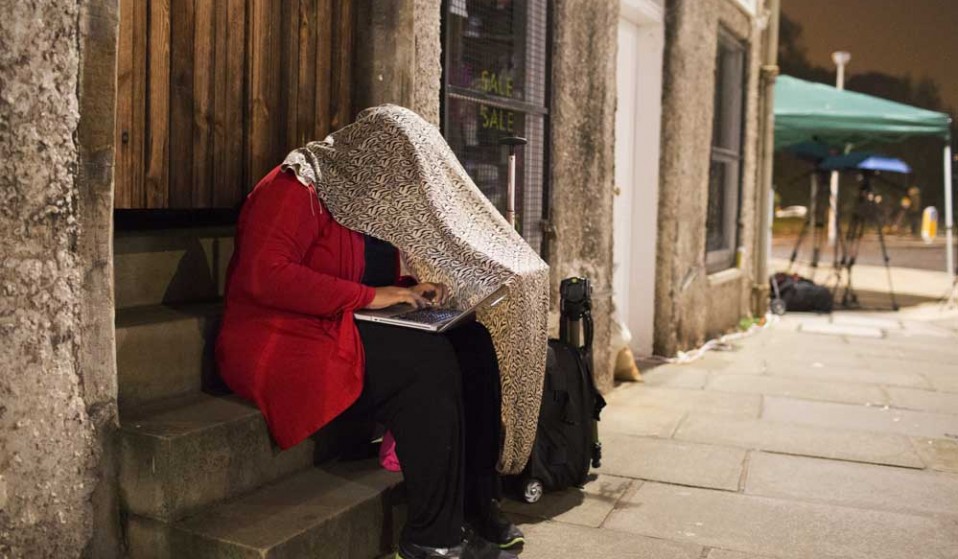 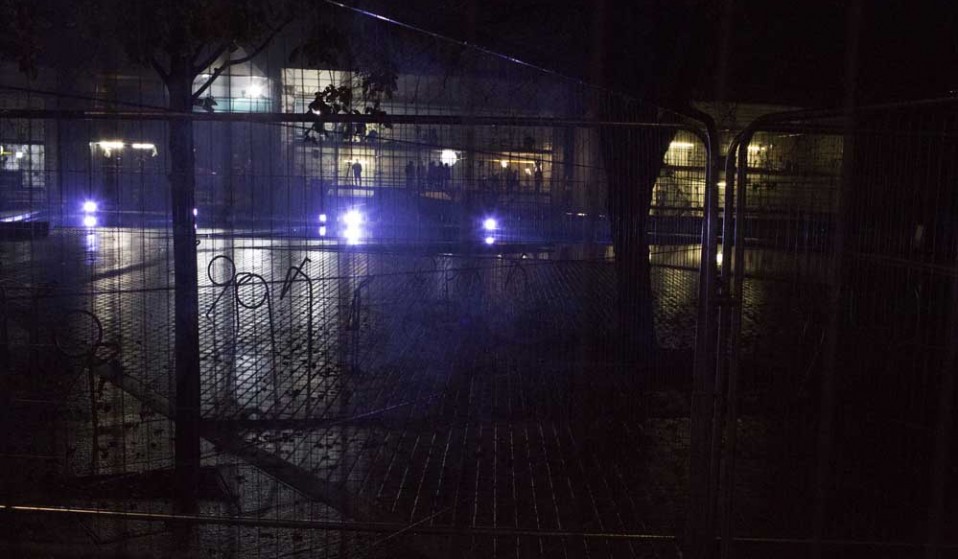 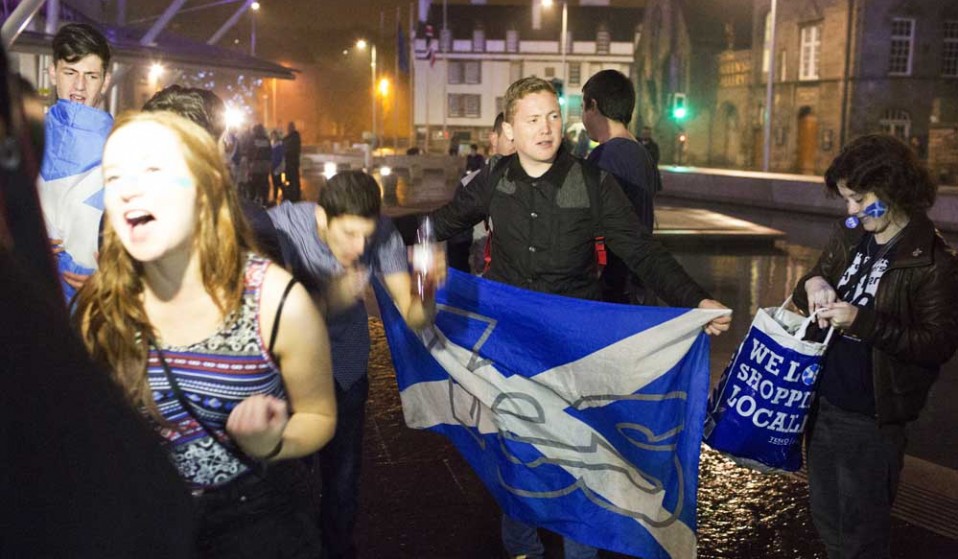 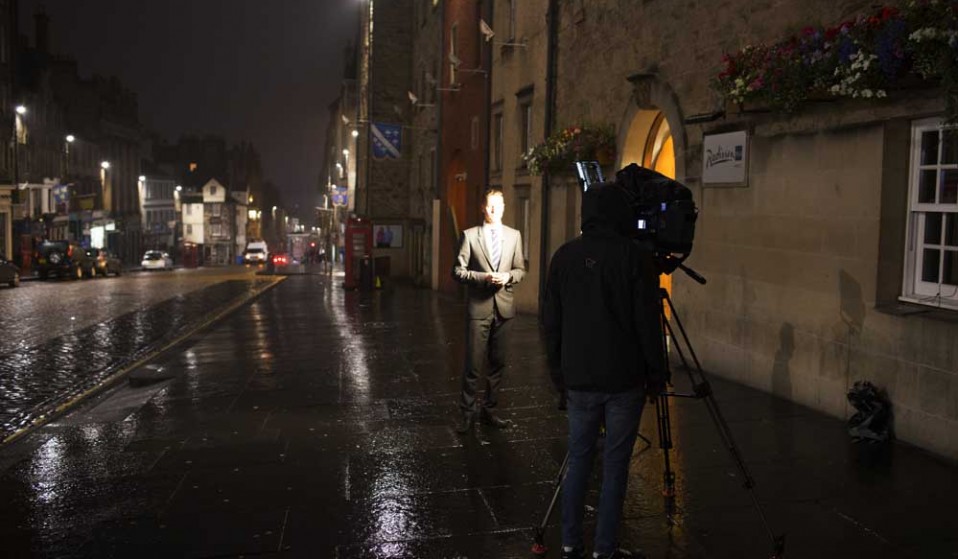 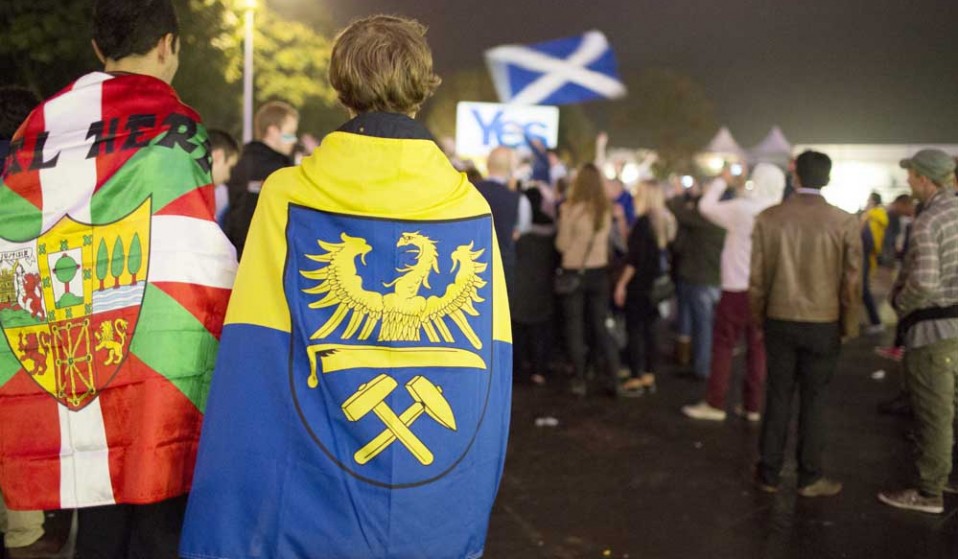 Michael Fordham bears witness to The Most Important Day in Scottish History.

Michael Fordham bears witness to The Most Important Day in Scottish History.

All the blether. All the banter. All the talk of momentous days and sweeping changes. Reform, reorganisation, devolution and democracy. It all came together last Thursday, September 19, in Scotland – and with a resounding NO, it seems, the people decided, by a significant margin, that their country should not be independent. But behind the veil of democracy’s statistical certitude the feeling on the streets, in Edinburgh at least, was that the YES vote was an inevitability. That’s the thing about democracy. It often renders appearances meaningless.

If you’ve ever spent an average evening on the streets of the Scottish capital you’ll have known what to expect. Edinburgh’s ubiquitous dreakness, the fine mist of moisture that renders the rocks and the stones dark and drear and the stairwells treacherous – all present and correct. There were the usual prittle prattling flocks of men and women legging it from bar to club to chippy to cab rank. And in this city built on images of nationhood the blue and white of the Scottish Saltire is often front and centre of the aesthetic. But tonight – the energy is racketed up just a wee bit. This is, after all, and if you believe the hype, The Most Important Day in Scottish History.

And it’s all pretty familiar. I spent a tortuous year in Edinburgh. In 1994 I moved there by accident – to be with a girlfriend. I had been trying to write a novel, signing on the dole and working in bars in the evening (back then a very common contradiction). I was stranded, displaced – a Londoner out on the wet, dreary edges of things. But this sense of otherness was somehow comforting. I had embraced a certain sort of alienation and it felt natural to be a stranger in this wet, argumentative land. The idea of Scottish independence was hardly on the agenda back then – the whole British nation was still wracked at the fag-end of a 16-year-old Tory government and the nationalists were almost meaningless in the shadow of the Scottish Labour party’s parliamentary muscle. Prime minister John Major had been droning on about reconstruction and there was the highest rate of graduate unemployment in history. Still – the political tendencies of the youth were still shrouded in the comedown of rave culture – and the pop-cultural boom motored by the economic recovery of the mid to late nineties was yet to hit. Irvine Welsh and the Rebel Inc crew – who bandied together to put out a countercultural journal and books under the tagline “Fuck the Mainstream!” – were shooting up in Easter Road and had yet to score a publishing hit. Trainspotting, the book, had just come out, but it would be three years till that story hit the silver screen. It was a time of stasis, a moment of inertia. Edinburgh seemed like an alright place to park for a while.

As the the polls closed at 10pm, and up and down the Royal Mile – at the foot of which is the Scottish Parliament and Holyrood House – there are processions of mainly young people, many adorned with face paints and flags, waiting for what they seemed to think is an inevitable nod for independence. In the middle of the mile there is a gathering of people from other nations that have been asserting their right to self determination. Catalans and Basques stand shoulder to shoulder with Ukrainians – and, oddly – flags of nations that I can’t even identify are wrapped around burly shoulders. And here’s the thing – flag-waving nationalism is rarely pretty. It oversimplifies debate – neutralising the light and shade of political reality and drawing it into an emotive technicolour. And even if you subscribe to the idea of ‘national characteristics’, it’s almost impossible to wave a flag without setting up this kind of simple otherness; an opposition with someone else.

Outside the cathedral, next to the statue of economist Adam Smith, the vibe is peaceful – cuddly even. It’s a sharp contrast to the raucous gathering outside the parliament, where everyone is pished, reducing the great sweep of democracy to a failed Scottish World Cup campaign. There are, of course, bag-pipes. There are, of course, a number of drug-fucked casualties and chip-supper flavoured pavement pizzas. The few pubs granted licence to stay up all night are surrounded by a baying mob trying hopelessly to get in for another round. As the counts began to come in around 1AM – kicking out time for most Edinburgh pubs these days – it becomes apparent that the YES vote is on the back foot. But you wouldn’t know it down outside parliament. The crowd seems deluded, intoxicated by the idea that the nation may choose to go it alone. And that feeling doesn’t fade, even with the continual announcements that another region voted no. When Dundee, and then Glasgow announce a YES vote around 4.30AM – the crowd go wild – seemingly neglecting to note that they are deeply in the minority and that the NO decision is now just a formality.

That night I twice get called an English cunt, have a handful of sensible political conversations, slip over in human sick and watch while operatives of the mainstream media bask in the tungsten light of their reflective glory.  So many familiar feelings. As I walk back down to Waverley station at 6AM to catch the first train south, the only folk left on the streets are the news crews and the odd quick stepping worker on the early shift. It’s difficult to get excited by a negative. The only thing that is constant is change. But in Edinburgh things sometimes just stay the same.

Linkedin
RELATED ARTICLES
OTHER ARTICLES
A new law change is enabling Britain’s donor-conceived children to know the truth about their origins – but campaigners say the fertility industry must do more to protect people.
AI companies that develop image-generators using copyrighted artwork from the internet are coming under fire from artists who say that it amounts to theft.
Tristan O’Neill’s shots of dancers caught in moments of reverie at the height of rave’s golden age are a testament to the UK’s legendary club culture.
As she gears up for the release of her first book, the 24-year-old climate activist talks standing up to authority and building a more inclusive movement.
Social prescribing connects people with non-medical support to improve their health and wellbeing – but some experts worry it’s just a stick plaster solution.
Photographer Becky Tyrell went down to the fading banger and stock raceway to meet a community desperate to keep it alive.