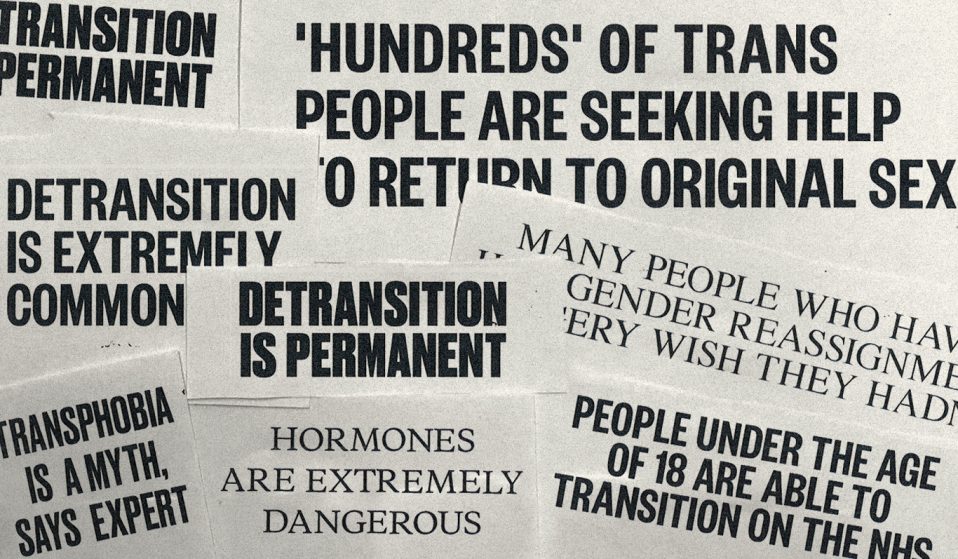 The mainstream media has spent years spreading misinformation and transphobia. Writer Jake Hall provides the evidence that disproves their latest scaremongering around detransitioning.

Last month, Sky News published a story with a headline claiming ‘hundreds’ of young trans people in the UK were seeking help to de-transition. Yet in the same article, the author explained there is no available data to back up this claim. The “hundreds” quoted in the headline instead came from an estimate given by an interviewee, who also happened to be the founder of the Detransition Advocacy Network – an unofficial and not exactly unbiased charity formed in September this year.

The article follows a formula now commonplace in the UK mainstream media’s coverage of trans issues: sensationalist headline, unqualified source, and complete lack of evidence. A handful of writers have called out media transphobia, but it’s not enough – this rhetoric has real effects.

In response, a spokesperson for LGBT charity Stonewall said: “We have long been concerned about the impact that debates and misinformation about trans equality in the media, online and in the streets would have on our community. The spike in hate crimes we’ve seen against trans people recently shows the consequences of a society where transphobia is everywhere.”

This concern around de-transition is part of a wider narrative, one which seeks to deny access to healthcare, cast doubt on the legitimacy of trans identities and prevent vital medication from being prescribed to trans people – trans youth in particular. With this in mind, it’s worth delving deeper to dispel – with actual facts and research – key myths around de-transition.

Official statistics are incredibly difficult to come by, but peer-reviewed studies indicate that the number of trans patients who detransition is incredibly rare. According to a 2002 study quoted in a recent Stonewall report, “less than 1% of 3398 patients who accessed NHS support went on to detransition.”

More recently, a 2018 study surveyed plastic surgeons from around the world who, between them, had treated approximately 22,725 patients. Of this number, only 62 had sought detransition – less than 0.3% in total.

‘Regret is usually the reason’

Articles written over the last few years, in particular, insinuate there’s an enormous number of trans people who experience “regret” and seek to detransition because of it. In actual fact, the reasons for detransition are far more often tied to dissatisfaction with surgeries, health issues, or inability to cope with transphobia. Transphobia not just from friends, families and prospective lovers, but employers and landlords, too.

Research shows that members of the trans community are more likely to suffer poor mental health and to attempt suicide, so it shouldn’t be surprising that, on extremely rare occasions, the distress is so intense that detransition seems the only option. In other words, anyone genuinely concerned about detransition should be working to create a safer, less hostile society for trans people.

‘Concerns around detransition are well-meaning’

According to veteran activist and Trans Britain author Christine Burns, these claims of concern are nothing new, and they certainly aren’t well-meaning. “In my experience, going back over 40 years, detransition has been endlessly mythologised by outsiders seeking to delegitimise transition,” She says. These claims are always backed by anecdotal evidence as opposed to peer-reviewed research and then weaponised by journalists seeking to roll back legal progress.

This was particularly commonplace in the 1990s when headway was finally being made: “Newspaper columnists would regularly slip references to regret and detransition in their articles,” Christine explains. “They would either quote people known for their opposition to transition or simply quote each other.”

The term ‘detransition’ sounds final, but it isn’t. Some trans people stop taking hormones or halt their transition before later resuming it, and even famous tabloid stories of detransition have been proven to be manipulated.

In 2015, VICE followed up with Chelsea and Ria, two trans women reported to have detransitioned by a handful of high-profile newspapers. Both later resumed transition, and the reasons behind their transition were transphobia, mental health and fear of surgery, not regret or a complete change of gender identity. As Ria bluntly summarises: “The press will do anything for a story, they chat so much shit.”

Generally speaking, the effects of hormone replacement therapy are reversible, although the same can’t be said for gender confirmation surgeries which while reversible due to medical improvements is only possible on extremely rare occasions. “By definition, transgender surgery is only right for trans people – that’s why clinicians spend so long helping people find out if they really are [trans],” Christine Burns explains.

As it stands, the NHS waiting lists stretch for years and you’re only added to them once you’ve completed “social gender role transition” which takes one to two years. Nobody under the age of 18 is considered for surgery either, which calls bullshit on media fear-mongering that some powerful ‘trans lobby’ is coercing gender non-conforming kids across the country into invasive operations.

Lists are so long in the UK that trans people are being forced to crowdfund private surgery due to NHS cuts, so rest assured that gender confirmation surgeries aren’t being dished out to anyone who hasn’t fully considered their risks.

Detransition stories often centre on the idea that hormones are dangerous or irreversible, but the reality is that all medication comes with side effects. Regular check-ups are conducted by the NHS, and the largest study of trans healthcare to date reveals that hormones “seem to be safe, with few side effects”. The problems lie primarily with black-market hormones, which are only sought when access to trans healthcare is restricted. Far from being unsafe, studies show that hormones prescribed professionally have one huge, significant change: “a decrease in anxiety and depression after treatment.”

Hormone blockers (also known as puberty blockers) are more contentious, as debates generally intensify around trans youth. Studies are being conducted to measure their safety, but the NHS classifies them as reversible and, again, research shows their mental health benefits outweigh potential side effects.

Linkedin
RELATED ARTICLES
OTHER ARTICLES
Members of the collective share some of their reasons to run as part of #UnitedBySummits, a campaign that looks to uncover transformative power of the outdoors.
While protests over abortion rights rage in the US, access to abortion services is still almost nonexistent in parts of the UK.
Following the release of his latest album God Don’t Make Mistakes, the rapper talks horror villains, police brutality and being unafraid to show his vulnerable side.
To mark the anniversary of the mass trespass of Kinder Scout, a group of hikers came together with the intent of creating a new, fully inclusive culture for rural spaces.
Photographer Phyllis Christopher recalls capturing sex and protest at a time when the city had become a haven for the queer community.
The government’s failure to take long Covid seriously has led to the formation of a group campaigning for the thousands of forgotten victims of the illness.