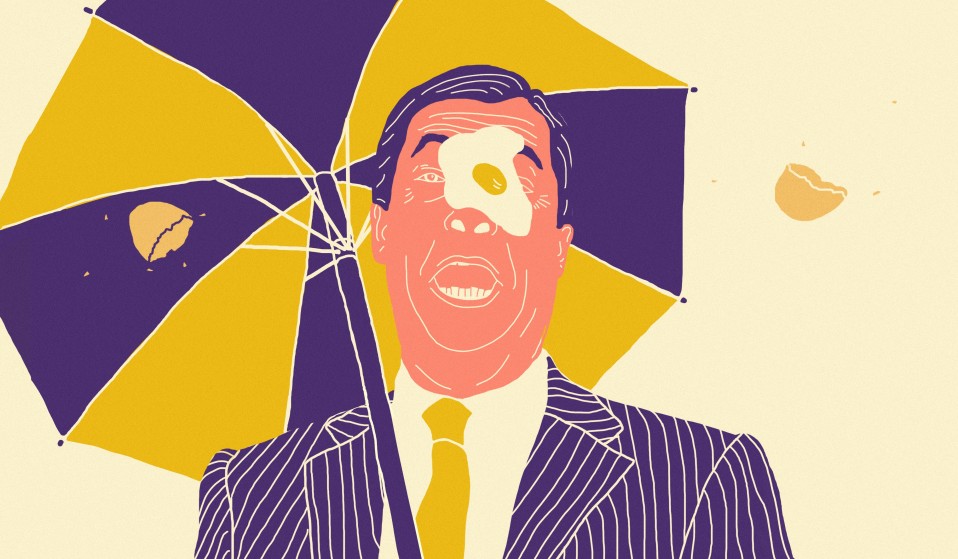 Throwing eggs at Nigel Farage might not be the pinnacle of political activism, but inaction and excuses are a whole lot more dangerous.

Throwing eggs at Nigel Farage might not be the pinnacle of political activism, but inaction and excuses are a whole lot more dangerous.

Nigel Farage (almost) ended up with egg on his face this week, while working the campaign trail for UKIP in Stoke on Trent. The former UKIP leader was with his successor Paul Nuttall, and had to narrowly avoid an egg thrown by someone who presumably thought poorly of him.

Elsewhere in the news, House of Commons Speaker John Bercow has landed himself in hot water, and is now being urged by Conservative MPs to “remain neutral” following his statement that Donald Trump would be unwelcome in Parliament during a state visit. Commentators are bringing up Parliament’s record of welcoming other foreign dignitaries with objectionable and questionable politics in attempts to undermine his decision.

Here are two people taking alternative and unusual methods to protest our unusual political times, and who are being criticised by those who think we are better off just getting on with it.

The politics of point scoring, whataboutery, and accusations of hypocrisy continue to rage on, each attempting to cover up what is really being said: that some parties would prefer it if we all kept quiet and “got on” with the new, bizarre status quo that is life in the Trump/Brexit era.

Millennials are told they are entitled snowflakes who wilt at the slightest bit of provocation, yet when we take to the streets to march and protest we’re denounced as selfish and as childish for not accepting the fucked up lay of the land.

“So much for the tolerant left” is the sarcastic joke banded about by some corners of the debate. The problem is, asking the vulnerable and marginalised to be tolerant at a time where their civil liberties are at risk is dangerously farcical.

It is often those with the least to lose who look to condemn the actions of the disenfranchised as they argue for their right to exist. It is people who say things such as “I don’t see race” as an attempted helpful statement, rather than an outright denial of the inequalities of the world and how they continue to profit from them. The people who say we should allow deplorable views to have equal footing to genuine political arguments are rarely the same people who find themselves at risk when those views have mobilised dangerous people.

Now, and I feel this needs to be capped up and put in bold so you understand what I am saying, I AM NOT TELLING YOU TO TAKE TO THE STREETS AND START PUNCHING ANYONE WHO HAS A DIFFERENT POLITICAL VIEW AS YOU.

I am telling you however, that if someone wishes to broadcast a view that emboldens racist behaviour, that creates an “us vs them” dynamic, that takes the standpoint that there should be a two tier system to how people should be treated based on their colour, creed or religion, then it is your civic duty to tell them to sling their hook.

To get out. To take their repellent views and flush them down the toilet. To take their backwards, immoral, grotesque viewpoint and either educate themselves and apologise, or kindly forfeit their position in polite society.

Is it harsh to use language such as this to describe someone like our eggy political figure Farage? Allow me to present the receipts: in June last year, just weeks before the Brexit vote,  Nigel unveiled the now infamous  “Breaking Point” poster for the Leave campaign. He took a photograph of Syrian refugees crossing the border from Slovenia into Croatia taken in October 2015, and used it as a means to tell UK residents to leave the European Union. People fleeing their homes from war, vulnerable people, were twisted and turned into a scaremongering caricature and we were asked to view this as acceptable political discourse.

This is a man who has said that “any normal and fair-minded person would have a perfect right to be concerned if a group of Romanian people suddenly moved in next door”, on talk radio when talking about immigration. “Tuberculosis is costing the National Health Service a great deal of money, and much of that is coming from southern and eastern Europe,” was his defence of a previous statement lambasting foreigners with HIV being given NHS care.

Allowing such things to be said, without question, without proper challenging, has led us to a crossroads where are now, where the Overton window is in such a place that last year in the week after the Brexit vote, racially and religiously motivated hate crimes saw a 41% rise.

In Steven Levitt and Stephen Dubner’s 2005 book Freakanomics, there’s a chapter dedicated to the post Civil War rise and fall of the Ku Klux Klan. In the 1940s a reformed Klansman infiltrated the heart of the organisation learning all their secrets and plans.

Along with writer Stetson Kennedy, the deep cover agent “John Brown” worked to expose these coveted secrets and then share them on a daily talk radio show Superman. This show took the Klan’s most personal secrets and turned them cartoonish villains. In not standing by while the KKK grew, in working to disrupt their information channels, John Brown and Stetson Kennedy defanged the monster in the corner, helping decrease the Klan’s influence on America.

That is not to say we will solely heal the rifts in the world with satire and twee and jokes and eggs, but a time where the world seems more fraught than ever, where the KKK openly celebrated the President’s  inauguration and David Duke tweets him (((suggestions))), inaction is the enemy. Inaction disguised as tolerance in the face of moral indecency is naive at best, and harmful at worst.

Do something, even if it is so silly as to throw a raw little egg.

Linkedin
RELATED ARTICLES
OTHER ARTICLES
Mass crustacean die-offs in the North East have led a community of fishermen to take action to save their seas.
After fleeing the war in Ukraine, people are finding it impossible to secure affordable and decent housing in the UK.
Taking us through one of the most dynamic years in recent history, Laylah Amatullah Barrayn new photo book contains tender yet confrontational portraits.
Yohon Tatum, aka Legendary Father of the House of Tisci, reflects on nurturing a new generation of talent.
Jeffrey Henson Scales intimate portraits and protest images of the BPP and its leaders offer a rare insight into organisation at a time of societal upheaval.
After building his reputation covering the US civil rights movement in the 1960s, the photographer went on to produce some of the most enduring images of the past century.