News & Politics / Opinion / Want to see who has blocked you on social media? Get a grip 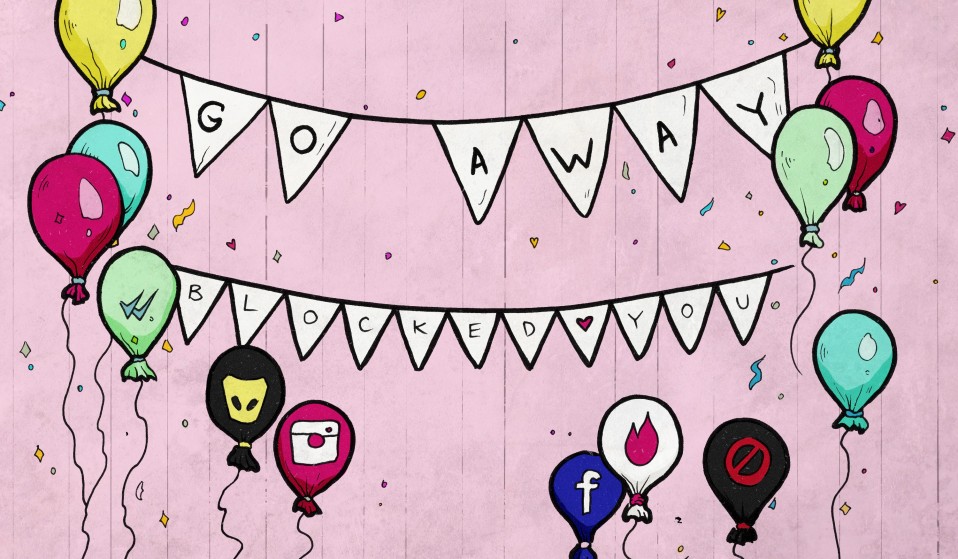 With a loophole on Grindr letting users see who has blocked them, Justin Myers looks at our unhealthy obsession with confronting our online haters.

With a loophole on Grindr now being exploited by users looking to see who has blocked them, Justin Myers takes a look at our unhealthy obsession with confronting our online haters and engaging with their irrelevant minds.

In an era where instant communication is at your disposal – although not always taken advantage of – the ability to opt out is increasingly important. It’s why we can leave WhatsApp groups, mute people on Twitter and block on dating apps. To block isn’t always an act of dislike or censorship – it can serve as protection. Do you really want your landlord following you on Facebook and poring over photos of just how dirty you’re keeping that kitchen? If you’re on Grindr, you probably don’t want your gay housemates knowing when you’re online or, perhaps, knowing you’re gay at all.

The block function is a fact of life, one of the few things digital refuseniks would probably agree works much better online than in the real world. It’s not just hiding when the doorbell rings, it’s cloaking your house in a shroud of invisibility. Although some apps and sites tell you when you’re blocked by someone – being excited and annoyed at this is a whole sub-genre of Twitter content, for example – dating and hookup apps in particular simply remove you from the equation entirely. You evaporate into thin air and, bar a few moments of head-scratching from the person you were talking to, everybody moves on. Until now.

A US-based developer found a quirk in the code of gay hookup app Grindr that allows you to see who’s blocked who. He’s very kindly created a special app, inspiredly named C**kblocked, that allows you to hand over your personal data like loose change and exploit and peek at Grindr’s faux-pas. Grindr has yet to comment, although is no doubt working furiously behind the scenes to fix it, but its users have flocked to see who’s shut them out over the years.

It’s like a very specific, unfathomable form of self-harm, waging war on your own mental health to find out who doesn’t love you anymore. Brushing aside legitimate concerns this breach could out closeted people, expose infidelities and destroy friendships, it seems most who use these tools, and others like it for other apps, are looking for answers. Quite what they’ll do once they have them is another conundrum entirely.

Apps like this aren’t uncommon for other services – they thrive on this insatiable need to know who’s unfollowed you on Twitter or Instagram. For social media professionals, of course, this information can be useful and allow you to see assess a particular audience’s editorial turn-offs. Mind you, the date seldom makes much sense or leads to meaningful conclusions, because trying to rationalise the behaviour of a stranger whose mood is a product of a very cluttered environment – of which your tweet about the new Drake video is just a small microbe – takes more time than the value of the answer would be worth.

So why do we do it? Like a pathetic ex or a clingy one-night-stand, we keep asking why, why, why, shouting our protests deep into a cave, hoping we’ll get something other than the faint echo of our own misery. Will we use the information to make improvements, change our behaviour? Unlikely, isn’t it?

No, it’s more usual we’ll use it to pitch ourselves at the centre of our own drama, to elicit sympathy. Obviously, some bad opinions and hectoring needs calling out, we can’t pretend it isn’t happening, but finding out who blocked you and wondering why isn’t a form of self-help to guide you through life, and lead to interesting, positive experiences – it’s a pity party.

It’s no secret that nuance is disappearing and discourse is becoming increasingly binary and linear. Hyper-positivity and weapons-grade negativity battle it out, with no room for fence-sitting, neutral zones or nonchalant shrugging – silence translates as complicity. From the very first moment we see a tweet, we can pretty much forecast the to-ing and froing of the backlash, as predictable as a metronome. Blocking, then, removes you from discussions you don’t want to be a part of, but quite often, the act of blocking becomes a political act, a statement of intent.

Users have blocking policies – “anyone not agreeing Rogue One is the best Star Wars movie will be automatically blocked” – and being excluded from the timeline of someone high-profile, of any political persuasion, is a badge of honour. Culturally, while one half of the world is glugging the Kool-Aid and revving up the positivity wagon, the rest is happy to celebrate the negativity we attract, from screen-shooting trolls to purposefully retweeting noxious opinions so people can see whose side we’re on and, all being well, agree with us and join our crusade. And if they don’t agree, well… even better, it means more fuel for this increasingly cannibalistic cycle of commentary, as the weekly circle-jerk of BBC’s Question Time can attest.

While there is always room for light negativity, and to keep questioning the actions of others, it does appear that revelling in it, trying to attract it, is counter-productive. It encourages the rather dangerous idea that loud negative opinions are what gets you noticed; it hatches moronic shock-columnists and feeds ludicrous TV debates that pretend basic human rights need to be challenged in the name of free speech. Yes, there is merit in exposing some of these views so we can stamp out bigotry and educate others, but when it becomes entertainment, and excites us, we have a problem.

It’s odd, somehow, that we feel reluctant to share good news lest we be accused of attention-seeking, privilege or thoughtlessness, yet quoting your haters or encouraging pile-ons of dimwits, who otherwise would’ve been shouting into the ether, is seen as a worthwhile way to kill time. Perhaps being disliked so fervently, or called out so angrily, makes us feel seen. Being adored is not enough, it feels fake – to be truly alive, you must be loathed.

We spend too long, perhaps, trying to dissect the opinions of those who don’t care about us or wish us harm. We try to understand them in the vain hope it will tell us more about ourselves so we can try to change their minds. This is a folly: if people want to avoid you because you’re an idiot, you probably already know this deep down, and waiting for an epiphany from your haters only means you’re neglecting those who’ve had your back since day one.

If you really want to know who’s blocked you, or why they don’t talk to you anymore, go ahead and do your digging – but ask yourself why, and be honest. Will this really change you as a person, do you want them to reconsider, or do you simply relish the thrill that you managed to have such an impact that they have cut you out of the life? If so, I have bad news: they probably can’t even remember you, or what you did to get them to block you.

Remember the old adage: out of sight, out of mind, and realise you are both. It’s probably a good idea to stay there too, for your own sake.

Linkedin
RELATED ARTICLES
OTHER ARTICLES
As the Criminal Bar Association enters its fifth week of action, criminal barrister Russel Fraser explains why the legal professionals have walked out and how action is likely to escalate.
With the UK now set to run out of vaccines, people working in the sex industry – particularly outside of major cities – have been left especially vulnerable, reports Brit Dawson.
To mark the premiere of his new documentary on surfing giant Gerry Lopez, the filmmaker and former pro skateboarder sits down to share his unique brand of wisdom.
After rewriting the indie rulebook with her devastating songs about romantic longing, the singer-songwriter is now imagining a future in which the artist is no longer a product.
Last week, Tower Hamlets council removed its nudity-restricting licensing conditions in a huge win for London’s kink community.
A series of photos by the late Jerry Dantzic taken in 1957 show a tender side to the iconic Jazz musician.