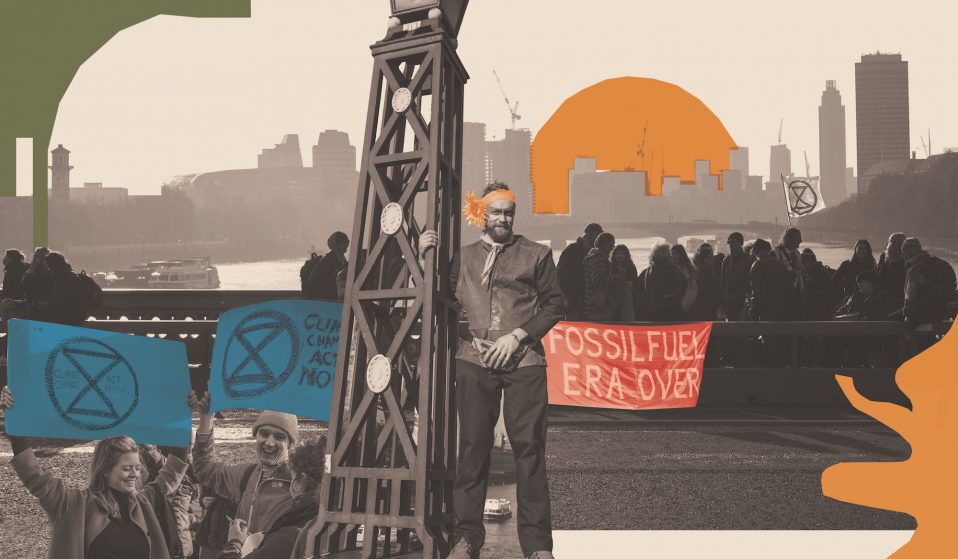 This week three Scottish activists climbed aboard a rig in Dundee harbour to highlight the country’s continued dependence on planet-killing fossil fuels. Here, they explain the critical reasons why they did it.

This week three Scottish activists climbed aboard a rig in Dundee harbour to highlight the country’s continued dependence on planet-killing fossil fuels. Here, they explain the critical reasons why they did it.

At 5pm on March 8 last year, members of Extinction Rebellion Scotland sat down in the historic main atrium of our National Museum of Scotland and locked themselves together. The Scottish Oil Club Dinner was due to take place that evening; a dinner where fossil fuel executives make contacts, scheme deals and lock us further into carbon emissions caused by the extraction of fossil fuels.

That night, we delayed that dinner by five hours. We also began our campaign to tell the truth about the reckless expansion of the fossil fuel industry in the face of climate breakdown. That action was our first ‘Rig Rebellion’.

Yesterday, we launched Rig Rebellion 2.0, levelling up our action against the fossil fuel industry and the Scottish and UK Government’s support of it. Over the next two weeks, we will be taking more action.

Rig Rebellion 2.0 began with three Extinction Rebellion Scotland activists – all women – scaling the VALARIS 122 rig in Dundee Harbour, occupying one of the legs for five hours. This rig is leased to Shell, who intend to drill for gas in the North Sea, and is scheduled to leave this week.

[BREAKING] @ScotlandXr activists boarded a Shell gas rig currently parked in Dundee Harbour, destined for the North Sea. They have scaled the towers and intend to stay up there for as long as possible to stop the rig leaving the harbour. pic.twitter.com/7teUwUad4J

Driven by the severity of the crisis and potential worldwide suffering Shell and the rest of the fossil fuel industry’s actions are causing, these women put their safety and liberty on the line and took a stand.

Extinction Rebellion Scotland is made up of normal people, not professional activists. We are frustrated, angry and frightened. We are directly taking action against an industry which wants us to feel powerless. They have spent billions on a 40-year long campaign of lies, misinformation and lobbying, trapping us in a fossil fuel driven economy which is causing devastation world wide. But we’re not powerless. We can take action, to tell them that this cannot and will not continue.

We want the government to tell the truth about the fossil fuel industry’s role in driving the climate crisis, to stop pretending that fossil fuels can be part of the fairytale of a “low carbon energy mix” future. We want governments to act now to wind up the industry and justly transition away from it. We also want workers, communities and the people of Scotland to make the decisions on how this is done, in a legally binding Citizens Assembly. No more vested interests, no more executives out for their own profit at the table, no more lobbyists or shady think tanks.

In Scotland, our government claims to be world leaders in tackling climate change. The cognitive dissonance of this claim, while being committed to the continued expansion and extraction of fossil fuels, is not only ludicrous, but dangerous.

This dangerous practice of draining oil and gas reserves is being replicated across the world, with extraction massively increasing. Research from Rystad Energy, a Norwegian consultancy regarded as the gold standard for data in the industry, forecasts Shell and ExxonMobil will be among the leaders with a projected production increase of more than 35 per cent between 2018 and 2030 – a sharper rise than over the previous 12 years.

The fossil fuel industry want us to believe they are an asset to our economy, that we need them. This is just not true. The fossil fuel industry worldwide receives five trillion dollars in subsidies each year. That’s 10 million a minute. Shell avoided paying corporate income tax in the UK in 2018 despite generating pretax profits of 731 million dollars. They pay their CEO 143 times what their average worker receives. And as Australia burns, Shell are celebrating the discovery of a massive gas field off the country’s western coast.

Shell would like us to believe that gas is a clean fuel. However, as Oil Change International said last year: “The concept of fossil gas as a ‘bridge fuel’ to a stable climate is a myth. Emissions from existing gas fields, alongside existing oil and coal development, already exceed carbon budgets aligned with the Paris Agreement. Even if all coal mines were shut down tomorrow, the gas and oil in already-developed fields alone would take the world beyond the carbon budget for a 50 per cent chance at staying below 1.5ºC of global warming.”

Historically and globally, Shell has irreparably harmed communities, lands and people. In the ’90s in the Niger Delta, Shell was accused of being instrumental in the killing of nine indigenous activists, who protested their badly managed and ecologically damaging pipelines; the Ogoni Nine. We took this action in solidarity with the community of Ogoniland, who continue to be affected today.

History has shown us that extractive industries like mining and fossil fuels show very little care for the communities in which they operate. When global commodity prices go down and mines have to close, jobs disappear and communities are systematically left behind. We’ve seen it in Aberdeen in the oil price downturn, and in the ’80s in the mines – it’s pretty much the same story in every country in the world. They are not good employers. Every time the oil prices go down, wages drop, jobs are lost and people are not protected.

This is an uphill battle – but it’s the one we’ve got to win. We are in a climate and ecological emergency, and we better start acting like it, or Scotland will be the Pied Pipers of certain catastrophe.

Linkedin
RELATED ARTICLES
OTHER ARTICLES
Leading art critic Robert Storr reflects on the photographers – from Seydou Keïta, to Malick Sidibé, to Carrie Mae Weems – who helped to transform and redefine the medium.
Ahead of the policing bill reaching its final stages in the Lords, protestors came together to rally against the legislation.
As the role of the nuclear family is increasingly called into question, people are finding new ways to exist outside heterosexist norms.
Photographer Yan Morvan revisits a radical moment in history, which saw the emergence of a fiercely-rebellious spirit among the UK‘s youth.
From the queues outside to the last ones standing, Francesco Mellina’s new photo book follows a night that has gone down in the Northern-Soul history books.
Photographer Melanie Nissen recalls capturing the characters, fashions and rarefied chaos of a rapidly-expanding set of punk bands who helped to redefine the genre.