News & Politics / Opinion / Cop shoots black man and gets away with it. When will the injustice end? 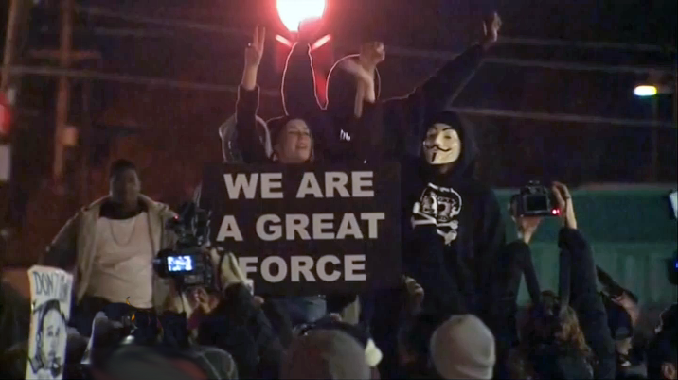 In the aftermath of Ferguson's grand jury decision on Michael Brown's shooting, Ted Endo dynamites whatever crumb's left of the mythologised American dream.

In the aftermath of Ferguson's grand jury decision on Michael Brown's shooting, Ted Endo dynamites whatever crumb's left of the mythologised American dream.

My country bleeds again – six weeping gunshot wounds in the body of an unarmed man – and all that is left is to sit choking on the gore. Two years after Trayvon Martin was destroyed by a monster in Florida and three days before 12-year-old Tamir Rice was cut down in Cleveland, Michael Brown took six shots in Ferguson, Missouri, and bled out in the street while his neighbours watched. There will be no justice for him, as there was none for Trayvon, as there will probably be none for Tamir. For Brown there will not even be a trial. The police of Ferguson have been deemed above even the suspicion of wrong-doing. God Bless America, land of the free, home of the brave.

Don’t delude yourself. There’s no freedom left in a country where the unarmed are cannon fodder for the armed, where the only protection is to carry a bigger weapon. There is no bravery left in a country where the voice of an entire section of society is consistently reduced to the tortured howl of the riot. There is no equity in an economy of thieves. As we sleepwalk through the dark night of our own mutually assured destruction we stand on cable news and debate the distance from the car, and when or if the dead man turned before the 3rd and 4th shots. What fatuousness. What dim-witted brinkmanship of hastily arranged talking heads and Facebook experts taking a break from looking at pictures of naked celebrities to ejaculate their every half-cocked idea into a group of friends they have never met.

Good and evil have many grey areas, but whenever the powerful destroy the weak a grievous wrong has been done. Michael Brown might have been a big man, but his life was stomped out by something bigger – the opaque, unquestionable apparatus of the modern American justice system issued from the barrel of a Glock 17. When the power disparity is that absolute there can be no reasonable justification for a street killing. The police haven’t even tried. Instead, they’ve thrown every smoke screen, played a symphony on every one of our fears.

A young man knocks off a liquor store then picks a fight with a cop? Does that sound like something anyone who valued his life would do? Let’s just say it then: That’s just how ‘they’ are. Violent, stupid, apparently superhuman enough to take five bullets and keep on attacking with nothing but fists and that unquenchable, savage, black rage.

It’s bullshit – the dumbest, least believable story ever told. It would make the Brothers Grimm blush and yet the mainstream media didn’t even have the grace to look the killer in the eye and ask a reasonable follow up. Why would they? They don’t want Michael Brown walking down the middle of their street either.

Brown was a straight up, weed-smoking, Black and Mild robbing thug. A tough case from a poverty-ridden society that spits out people like him when it isn’t otherwise tearing itself apart. The Ferguson police, perhaps all police, would have you believe that this means we should forget him and let them go about their dirty business – until the next young man dies and we once again tumble into this funhouse of media misdirection, meaningless legalese, and flat-out lies. But it doesn’t. When an unarmed man of any race, creed or colour is slaughtered in the street and the killers don’t even have to provide a coherent excuse, none of us is safe and our treasured beliefs about who we are and what we stand for are already dead and rotting on the vine.

This article has also featured in The Inertia.

Linkedin
RELATED ARTICLES
OTHER ARTICLES
Huck asks US police brutality experts if victims will ever get justice and what needs to change to end the violence.
When a group of single mums occupied an empty council estate near the Olympic Village, they made the UK housing crisis impossible to ignore. But what’s driving Londoners out of their homes?
As the housing crisis deepens, and tower blocks keep rising for the transnational rich, Michael Fordham ponders London's cultural loss.