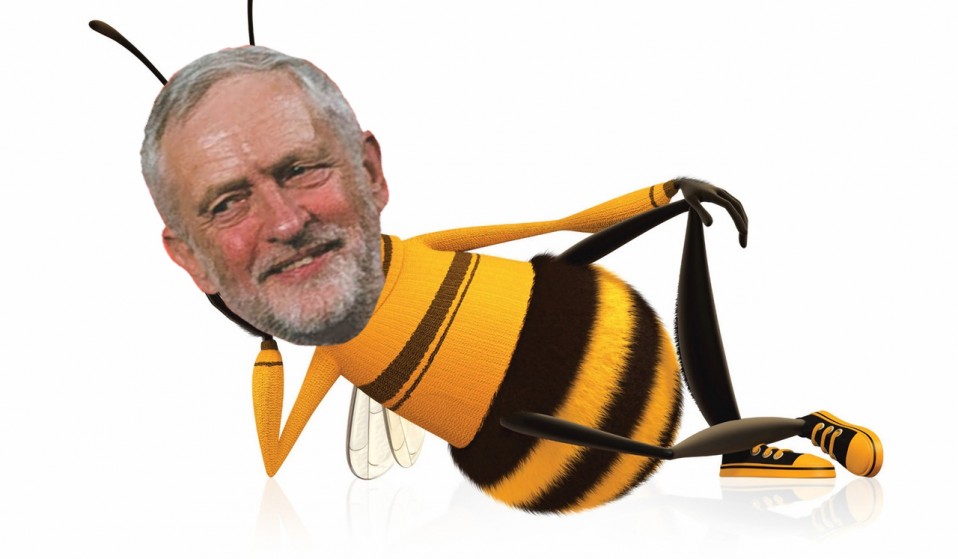 This general election is like Bee Movie: we are comrades in a class struggle as a queen watches on. It's time for less 'thinking me', more 'thinking bee'.

Jeremy Corbyn didn't just include a reference to saving bees in the Labour manifesto because he cares about the planet. It's a subtle reminder to us all that this general election and Bee Movie are one and the same: we are comrades in a class struggle as a useless queen watches on.

As political allegories go, Bee Movie isn’t the most subtle: Barry B Benson, a New York bee, finds that bees have spent millennia alienated from the fruits of their labour. He launches a fight for beekind’s civil rights, culminating in a bee general strike which turns Central Park barren  and – presumably – brings humanity to the brink of death.

Collective action puts the planet on its knees. To the ignorant, it’s a film about a bee who wants to fuck Renée Zellweger. These people do not truly appreciate the Bee Movie.

Jeremy Corbyn recognises the importance of bees. The draft Labour manifesto, for the first time, includes a promise that should Labour make it to Downing Street they will “protect our bees” by banning neonicotinoids, the pesticides held responsible for a two-decade decline in wild bee numbers. This might be because Jeremy sees the very real risks of a plummeting bee population triggering global famine. Or, equally, it might be that Corbyn has finally realised that bees are our comrades.

Bees, it goes without saying, are the traditional British working class. The hive is the steelworks, the coal mine, the mill. Despite living beneath a Queen, who they will protect with their lives and dream of having sex with, the bees themselves are roughly equal. But in the last twenty years the humble working bee has taken a beating – by human men intent on reaping maximum profits, with no damns given as to the knock-on effects. Bee Britain is every town in which the Woolworths became a BrightHouse. Neonicotinoids? More like neoliberalism.

Bees are the little guys – which means you can judge a politician by how they treat them. Barack Obama warmed a nation’s hearts when he declared that “bees are good”, and he was said to have a particular affection for drones.

Theresa May has no official bee policy, but you might take a stab at it. When Theresa May sees a bee stuck indoors, she traps it in a glass, but instead of freeing it outside like a normal person, she leaves it to suffocate. She stubs the last of the life out gleefully with a stiletto heel. She makes eye contact. “That was my nectar”, she says, all strongly and stably. “It’s my garden”. She places the corpse outdoors as a lesson to the others, and its family identify it by the bee equivalent of dental records.

Labour’s “save our bees” policy is just one line of the draft manifesto, but it’s a symbol of everything else in there: it’s about protecting the workers on whom society hinges. Paying nurses properly, instead of having them Hunger Games for food bank sweetcorn. Giving Uber drivers one single employment right, maybe, though their contract technically reads “we own your blood”. Feeding their kids, rather than having them faint in classrooms because “it’s funny”. Tiny, obvious revolutions, which might just change ordinary people’s lives for the better. Real socialism, and every time you vote for Labour, it gets faster.

Contrast this with a Tory campaign which, far from protecting anything, has come equipped with a laundry list of things it might kill – starting with foxes, and working its way up to “everything, gleefully, if it came to it”. A campaign which still won’t promise EU nationals they won’t get dawn-raided, because acts of basic humanity might look weak.

At Bee Movie’s climax, the bees of the world unite under a single slogan – “thinking bee” –  and steer a stricken plane, containing the pollen needed to revive the planet’s ecosystem, to safety. “Thinking bee” is a coherent ideology – it’s about working together as a species to solve our greater problems. Labour already has a slogan, but here’s a better one:  Britain needs less “thinking me”, and more “thinking bee”.

Perhaps Jeremy Corbyn has learned from the bees. The bee should not be able to fly, yet somehow, it does. And according to all known laws of politics, there is no way that Corbyn should be able to abolish tuition fees, renationalise the railways, and win an election from twenty points adrift. Jeremy Corbyn, of course, will do all these things anyway.

Because Jeremy Corbyn doesn’t care what you think is impossible, or should that be Jere-bee.

Linkedin
RELATED ARTICLES
OTHER ARTICLES
A new law change is enabling Britain’s donor-conceived children to know the truth about their origins – but campaigners say the fertility industry must do more to protect people.
Since 2007, Gideon Mendel has made 20 trips to document floods in 13 countries. The result is an alarming record of what has already been lost to the climate emergency.
The action took place in response to the 200 asylum-seeking children who were placed in hotels run by the Home Office who have gone missing.
Photographer Sean Maung reflects on documenting a small town in Pennsylvania afflicted by high levels of unemployment, poverty, violence, crime, and addiction.
Following the release of his debut single, Deyaz talks battling addiction, dealing with his struggles through music, and building a budding music career from his living room.
After blocking the Scottish government’s gender recognition reform bill, Westminster is now devising further changes to the law to make it harder for trans people to self-identify.