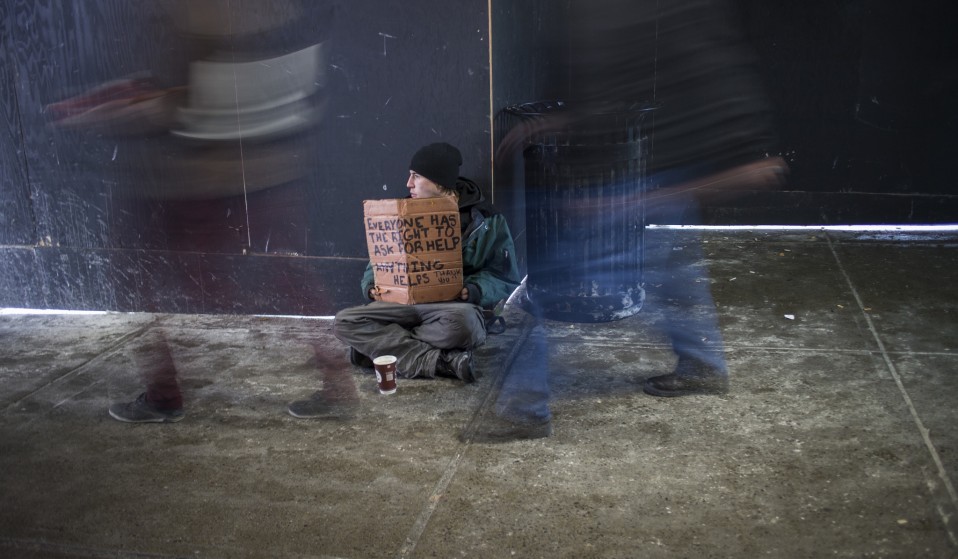 A society can be judged by how it deals with its most vulnerable – and as it gears up for 2018’s Royal Wedding, the UK is already showing its true colours, writes Dawn Foster.

A society can be judged by how it deals with its most vulnerable – and as it gears up for 2018’s Royal Wedding, the UK is already showing its true colours, writes Dawn Foster.

It’s early in 2018, yet it seems one trend is already taking hold in Windsor: the bold return of feudalism. Any wedding involves mind-melding amounts of preparation, but only a royal wedding could demand the clearing of homeless people from the streets to avoid the glances of the massed crowds landing on a huddled rough sleeper. Nothing, according to the council responsible for the move, should detract from the pomp and pageantry of Harry and Meghan Markle’s big day, and presumably the realisation that all subjects are not equal risks damaging the patriotism around the event.

The move has provoked outspoken fury, with homelessness charities and even the prime minister condemning the decision from the council. But elsewhere, other homeless people were the subject of much less compassion and concern. After the Manchester bombing last year, two homeless men were lauded for their bravery in rushing to offer help to injured victims. Thousands were raised online for the pair afterwards, and offers of work and accommodation were forthcoming. Half a year on, one is in prison, admitting to stealing credit cards from victims in the mayhem, and the other has not been seen for some time: much of the money raised for both men has been returned to the donors.

A fair amount of anger was directed at both men, for their behaviour or failing to live up to the hopes of donors, but several people contacted me in a righteous fury, claiming this showed treating homeless people with compassion or undertaking any charity was pointless at best and harmful at worst. The men were responsible for their circumstances, and even when offered a route out of homelessness and addiction, dashed such chances and remained entrenched in drug use and rough sleeping.

This misunderstands both charity and empathy. The people furious at the Manchester rough sleepers were annoyed that their empathy had not been appreciated or reciprocated – but neither charity nor empathy should be treated as transactional. The tendency to feel anger or hurt when your efforts for others are neither appreciated nor returned is natural, but should be overcome. Kindness shouldn’t be reduced to a use value, with the expectation it is extended only to be returned. It should be an aim of everyone in society, for the sake of transforming the world we live in.

There are myriad of reasons why someone might not show appreciation for efforts you make for them – both men in Manchester had substance abuse issues which are notoriously difficult to overcome – but withholding help or affection rarely helps ease any social relations. Even the smallest polite acts for strangers can have a transformative effect on someone’s day: if a neighbour smiles and says hello as I leave my flat for the tube, I’ll be buoyed, but if someone refuses to move their bag from an unoccupied seat, it can tip me from a disgruntled mood into a quiet rage.  You don’t move your bag because you anticipate a nodded thanks, but because you are part of society, and it’s a thoughtful thing to do for other members.

But even if, like the Manchester rough sleepers, the kindness extended to them is waved away, they shouldn’t be considered beyond help and undeserving of any future charity. Getting out of undesirable situations and finding the help you need is a long process: many rough sleepers will die young, despite attempts to engage them in schemes charities run. But many will eventually accept help and charity and manage to rebuild their lives. Offering help comes with the expectation that it will often be rejected: but unless people continue to proffer help, when someone finally needs and is willing to accept charity or assistance, it won’t be there. That’s a mark of a crueller, colder society: not one that many of us would relish living in.

Linkedin
RELATED ARTICLES
OTHER ARTICLES
In the last of our dispatches from OFFF Barcelona, Rufus Deuchler and Vincent Gault discuss the future of creative process.
Government plans to make it harder for people to go to university will only entrench inequality.
Our new magazine is here, starring the inimitable Mitski. Order your copy now and join us on a trip around the world.
Members of the collective share some of their reasons to run as part of #UnitedBySummits, a campaign that looks to uncover transformative power of the outdoors.
New legislation is set to make it more difficult to hold Israel accountable for its human rights abuses.
The failure to hold landlords to account is denying tenants their basic dignity, writes Bella Saltiel.