News & Politics / Opinion / How QAnon is weaponised against sex workers 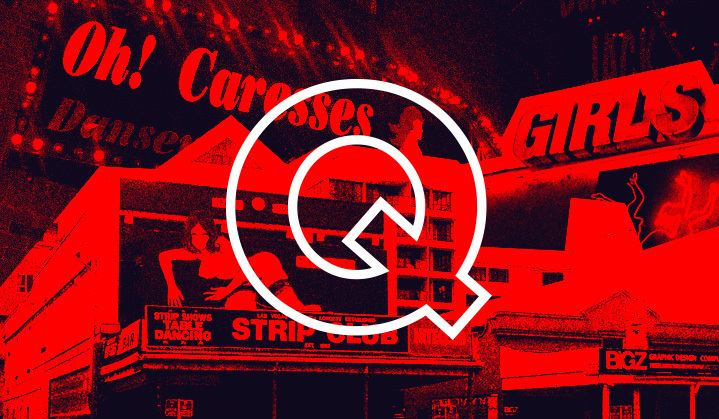 Adult performer and writer Sovereign Syre explores how conspiracy theories such as QAnon are really just a rehash of age-old anxieties wielded against sex workers.

Adult performer and writer Sovereign Syre explores how sex-trafficking conspiracy theories such as QAnon are really just a rehash of age-old anxieties wielded against sex workers.

In the run-up to the election, QAnon conspiracies have become ubiquitous online, clogging our feeds with YouTube videos and memes about the silent epidemic of child sex trafficking, as the outcry to #savethechildren grows to a fever pitch.

While the problem of sex trafficking is real, QAnon relies mostly on wildly exaggerated figures and misinformation around the nature of these activities. Broadly speaking, it’s a conspiracy theory that posits the world is run by a cabal of liberal elites: Hollywood celebrities, politicians, and billionaires that run a global child-sex trafficking ring.

Depending on how deep into QAnon you go, these “elites” are also Satan worshippers who use sexual abuse and terror to extract a chemical called adrenochrome from children, which is then used to cloak their reptilian form or keep them eternally young. Born on 4Chan, it’s mythology builds itself out of the anti-semitic fever dreams of white supremacists and yoga communities alike.

QAnon has edged into the mainstream this year thanks to the proliferation of conspiracies during COVID-19, and Donald Trump, who has refused to disavow the conspiracy. Trump has long postured himself as the anti-sex trafficking candidate, weaponising these narratives against anything he opposes, among them immigrants and sex workers.

“Sex panics, and especially sex trafficking panics, exist to target marginalised people, but also to remind others that they need protection,” says Dr. Heather Berg, Assistant Professor of Women, Gender, and Sexuality Studies at Washington University. “With calls to abolish police and prisons gaining ground, people in power are terrified,” she continues. “Even panics from fringe conspiracy theorists can help shore up the status quo.”

This may seem like a new phenomenon, and certainly, the problem of indoctrination is more disturbing and rapid than anything we’ve seen before, with entire Reddit groups dedicated to families that have lost members to QAnon. But read through broadsheets from the 18th century detailing the libertine practices of the rich, and the works of authors whose satirical stories of sadistic nobles terrorising maids and children in their dungeons, and it becomes clear that QAnon is just a rehash of old anxieties around how much power the powerful wield, and whether or not they’ll wield it against us.

This is why they are pushing so hard to force people to wear masks.

Democrats in our government, many in Hollyweird are all nvolved n child trafficking #SaveTheChildren pic.twitter.com/y5NT5ynJ0J

There is a dichotomy in the human condition between the desire to acquire power and the understanding that the possession of power is innately corrupt. These dark narratives tend to crop up during periods of political instability. In the eighteenth century, for example, a series of wars, scientific discovery, food precarity, economic disparity and a decaying aristocracy that no longer provided for the Third Estate (today’s equivalent of the 99 per cent) fomented a panic around the wealthy and their degeneracy, which eventually agitated into a series of revolutions.

If you’re on the left, sex trafficking is still a panic, albeit the players are little more mundane – pimps and pirates lurking in chat rooms on the internet, luring naïve young girls into the sex trade. While the narrative on the left claims to care about sex workers, they still think sex work is work no one could actually want to do. They perceive all sex workers are by default trafficked, if not by actual people, then by the patriarchy.

In this instance, ‘The Patriarchy’ becomes an elusive boogeyman, distracting from the system of institutions that have created the material circumstances that make sex work attractive and the stigma that makes the job hazardous. Today, the fight to control women’s bodies is framed as a moral repugnance at the objectification of the female body for commerce, rather than for the economic good of women’s labour remaining unpaid or under-compensated, primarily in the domestic sphere.

But rather than get derailed by the philosophical circle jerk of whether or not sex work is rape, legitimate labour, or empowering, or whether or not Trump is really the Wolf King the Evangelicals have been praying for to turn the US into a theocracy, I’m going to stay focused here on the actual problem.

Is there a global sex industry? Absolutely. But statistically speaking, the majority of those engaged in the sex trade are doing so willingly. Does that mean that those who aren’t don’t matter? No, but it makes the scope of the problem more manageable. We can fight sex trafficking, but we can’t fight Satanic reptilian shape-shifters. Sex trafficking happens, and it is bad. The problem is that sex work – that is, people willingly engaging in the trade of sex – has been conflated with sex trafficking; the forced sexual labour of person for the profit of another.

This has been done by design with governments criminalising everything around the exchange of sex for money (take, for example, The Swedish or Nordic Model) and describing it all under the purview of trafficking. If you share a hotel room with another sex worker for safety, you now run a brothel and are a trafficker, if another sex worker asks you if a client is safe to see, you have now facilitated in the sale of sex.

If you run a website that allows sex workers to advertise their services, you are now part of a trafficking ring, and on and on, until it looks like there’s a massive interconnected syndicate of sex trafficking. This slow scope creep of the law is the product of years of sex panic, and ‘What About The Children?!’ activism by a State that wishes to maintain power and religious right groups that seek to exert influence over those politicians and eventually the state itself.

In order to pass these laws, these politicians and groups have to drum up the support of the public, and most members of the public don’t really care that much about prostitution. In terms of crimes, it’s low on the list of things that keep them up at night, which is why ‘What About The Children’ is such a powerful rhetorical tool for those that seek to abolish sex work. The sad reality is that for half of the children that are trafficked it’s at the hands of parents and family members. They are not part of a global cabal – they are your neighbours, but even taking those numbers, they are small (those trafficked for sex was 10 per cent).

To make these numbers more impressive, a lot of stats include children “at risk” for being trafficked, and “at risk” is a moveable feast in any ideological debate. Being at risk can mean anything from truancy to having a single-parent home, to being a minority. These stats are then turned into memes that claim a child in America today is 66,667 times more at risk of being sex trafficked than dying of coronavirus.

The first sex trafficking panic as we define it today happened in Victorian England. With more people moving into cities, there was a sudden concern with the working-poor underclass, the decay of the family and home and the corruption of the delicate female disposition. Women who could choose between working in a factory or working in a brothel were offered economic empowerment at the expense of virtue, but prostitution was seen as a moral failing – not slavery.

Journalist W.T. Stead wanted to see the eradication of prostitution. He realised that in order to do so, he had to make the practice horrific to the wider population, while turning the prostitute into a sympathetic victim, and so he fabricated a scandal. He decided to buy a virgin for £5 to prove how easy it was and to demonstrate the Babylon that London had become. He had to gain the help of several compensated players (who knew that the purchase of the child was not actually for sex), then lie to the mother of the child, telling her that the child was being hired as domestic labour.

The child was bought, and the story The Maiden Tribute of Modern Babylon was reported and set off a nationwide panic, that led to the Criminal Law Amendment of 1885, which suppressed brothels as well as prostitution and homosexuality.

The fate of the £5 virgin is hardly changed today.  Most of the groups working to ‘help’ trafficking victims merely act as a pipeline back onto the streets or into halfway houses where they are forced to do unpaid labour, and get “treatment” that is often a cover for religious conversion, while using the testimonies of victims as part of their campaigning and fundraising.

Many diversion programs require the “victim” to implicate anyone involved in her sex trade to keep from being charged with a crime, leading to more incarcerations, while those arrested for prostitution are separated from families and children and must go through life with a rap sheet that makes finding other employment difficult. These groups rarely offer any real tools to change the material circumstances of women’s lives while they continue to receive money from private donors and the state.

The real problem with the sex trafficking panic is that it doesn’t address sex trafficking, but obscures it. It redirects resources that could go toward social welfare programs and political actions that produce material changes in the circumstances of those engaging in sex work or making them “at risk” to sex trafficking, all while actively hurting the women and children it claims to champion. Therein lies the real reason to panic.

Linkedin
RELATED ARTICLES
OTHER ARTICLES
Shifting the focus from the cost of living crisis to tackling obesity while many starve or freeze is farcical and pointless, writes Fatzine founder Gina Tonic.
The situation in Afghanistan remains dire, with many groups facing persecution at the hands of the Taliban.
Following the release of his latest album God Don’t Make Mistakes, the rapper talks horror villains, police brutality and being unafraid to show his vulnerable side.
The revered showbiz chronicler recalls his journalistic beginnings, documenting subcultural scraps in the ’80s.
While protests over abortion rights rage in the US, access to abortion services is still almost nonexistent in parts of the UK.
Over the weekend, London locals came together to resist a pre-planned police raid targeting delivery drivers.