News & Politics / Opinion / How to survive No Deal Brexit, from a real-life survival expert 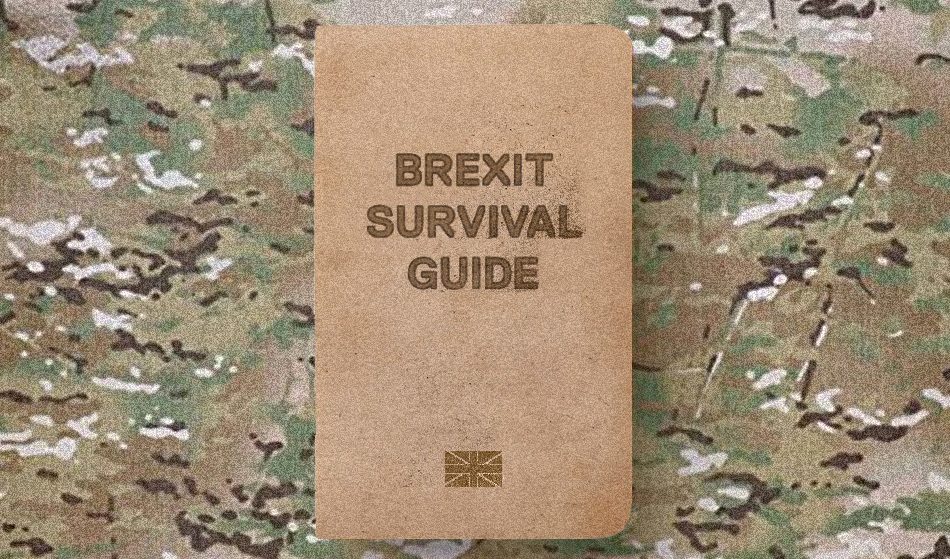 We ask professional bushcraft and survival skills instructor Paul Kirtley how to make it through the post-Brexit apocalypse.

With the prospect of food and medicine shortages, grounded flights and surges in price, we ask professional survival skills instructor Paul Kirtley how to make it through the post-Brexit apocalypse.

When Theresa May said the British public should take “comfort” in government plans to stockpile food and medicine in the event of a No Deal Brexit, she did so with the repressed hysteria of someone trying to prepare dinner while a terrible fire rages in the kitchen.

“What, this? No, this is fine,” she says, blindly chopping at a spring onion in what is now truly unbearable heat. As the flames climb the wall, she shakily pours herself a glass of wine, spilling most on the kitchen counter. Philip is in the garden, frantically unravelling the hose. “Strong and stable,” she sings, as an alarm chimes, indicating the lasagne is ready to come out.

According to reports and predictions, all manner of apocalyptic scenarios could follow Britain’s failure to strike a deal with Brussels by March 29, 2019. As well as the prospect of food and medicine shortages, grounded flights, surges in price and the army on standby (something Number 10 was quick to deny) could all form the initial foundations of Post-Brexit Britain. The shiny, sovereign future promised by the Brexit Boys and their Big Red Bus, it is not.

So, in the face of dystopian societal regression, we decided to wise up. Paul Kirtley is a professional bushcraft and survival skills instructor, with a background in the analysis and management of risk. As a black belt in jujitsu and qualified mountain and canoe leader, he is a good man – a great man! – to have around when the going gets tough. So, in the face of a No Deal crisis, we asked him how best to survive the coming nights.

Hi Paul! Britain might be running out of food. How should we as a nation be preparing for that?
Modern supply chains are sensitive to disruption. Goods being available for sale, particularly fresh food, rely on the established chain running smoothly. Supermarkets run their inventory on a just-in-time basis, with only a few days of capacity stored in the system. You only need to look at the fuel protests of the 2000s to see the potential rapid effect of large-scale supply chain disruption.

If European produce can’t get into the UK, or even if there is significant friction caused by increased customs checks, then it’s quite reasonable to foresee disruption to the supply of some goods. We have become used to going to the store and picking up what we want when we want it. A way to buffer the lack of contingency in supermarket supply chains, then, is to create a buffer in your own personal supply chain, so you can ride out any shortages. As a society, we need to be careful though, as panic buying will exacerbate any potential shortages.

What are the best foods to stockpile?
Dry foods that will keep for many months but only require water to prepare, such as rice, pasta, couscous and lentils, are versatile and form the basis of many good meals. Anything tinned lasts a long time, usually years. Tinned legumes such as kidney beans or chickpeas are filling and wholesome. You can also buy a lot of vegetables tinned. Tinned fish is easily available as are some meat products, such as corned beef.  Storing some flour and yeast would allow you to bake your own bread too.

Other ingredients such as dried potatoes, powdered milk, salt, pepper, dried herbs and spices will last almost indefinitely. Tea, coffee and sugar all keep for extended periods too. I’d also have some bottles of oil in the cupboard (most of our olive oil comes from Europe, right?).

Are there any other kinds of things we should be stockpiling?
If there was a general problem with domestic supply chains to shops, not just for imported food, it would be prudent to have a few more of life necessities in the cupboards than usual – toilet paper, toothpaste, toothbrushes and the like. Batteries, elastoplasts and basic non-prescription medicines (for headaches, colds, hay fever, etc.,) don’t take up much room but it’s annoying if you don’t have them when you need them, so it’s always worth having some spares in a drawer.

I wouldn’t be much use in a crisis. I am lanky and quite placid. What kinds of skills should I be working on to ensure that I’d be useful?
Well, given we are talking about food shortages and relying on foodstuffs stored in your cupboards, then the ability to cook a range of meals from first principles is definitely a skill you should be honing! See if you can up your skills in the kitchen by adding a more cookery into your average week. It might well be healthier too.

Being in good physical and mental shape is the best foundation for dealing with what life might throw at you. Then, one of the best things everyone should learn to be more helpful to others is a good level of first aid training.  I’ve done a lot of first aid training over the years, aimed at looking after people off the beaten track. But the basics are the basics and I’ve used these skills more in helping random strangers on the high street than in the wilderness.

What other kinds of apocalyptic scenarios should the average person be prepping for – environmental disaster, military coup, zombies?
The risks we should concern ourselves with first are those that are quite likely, even if they are not apocalyptic. Nothing you do in life is risk-free – driving a car, crossing the road, even staying in your house. To me there are two major components to preparedness: doing what you can to avoid the avoidable and diminishing the impact of the unavoidable.

Start by understanding what you can control.  There will be people today who are worried about Brexit or climate change or immigration or the far-right, but are left stranded on the hard shoulder, car broken down because they failed to check the fluids in their car engine before they set off.  You will be much more resilient in life if you purely change your orientation towards first reducing the chances of events you can control. Stay out of that rough pub. Wear a helmet when snowboarding. Don’t cross the road while looking at a smartphone. Tell someone where you are going before you head out for a hike. Check your oil and radiator coolant. Avoid the avoidable.

If, while out collecting wood, you come across Boris Johnson, who assures you that leaving your home for a life in the forest with him as your leader would be a good decision, could it be a trap?
Well, as far as I am aware, Boris Johnson does not have any outdoor leadership qualifications or even experience that might qualify him as competent in this area, so I would be somewhat sceptical of his abilities from the get-go.  I’d also be sceptical of the sincerity of a member of the urban elite wanting to go feral in the woods.  I’d assume he’d be working some disingenuous angle. That said, his hair is pretty wild. He often looks like he’s slept in a hedge but I doubt he has.

Following the Brexit vote, David Cameron bought himself a big shed. Should we also be buying big sheds, just in case?
I think a lot of men dream of a decent shed to which they could slope off in search of a quiet life.  In this respect, David Cameron probably needs a bigger shed than most.

Linkedin
RELATED ARTICLES
OTHER ARTICLES
Over the weekend, London locals came together to resist a pre-planned police raid targeting delivery drivers.
The government’s failure to take long Covid seriously has led to the formation of a group campaigning for the thousands of forgotten victims of the illness.
Following the release of his latest album God Don’t Make Mistakes, the rapper talks horror villains, police brutality and being unafraid to show his vulnerable side.
In the last of our dispatches from OFFF Barcelona, Rufus Deuchler and Vincent Gault discuss the future of creative process.
New legislation is set to make it more difficult to hold Israel accountable for its human rights abuses.
After news broke last week around an expected reversal of the 1973 landmark law that made abortion legal in the US, protestors gathered in the UK in support of American women.