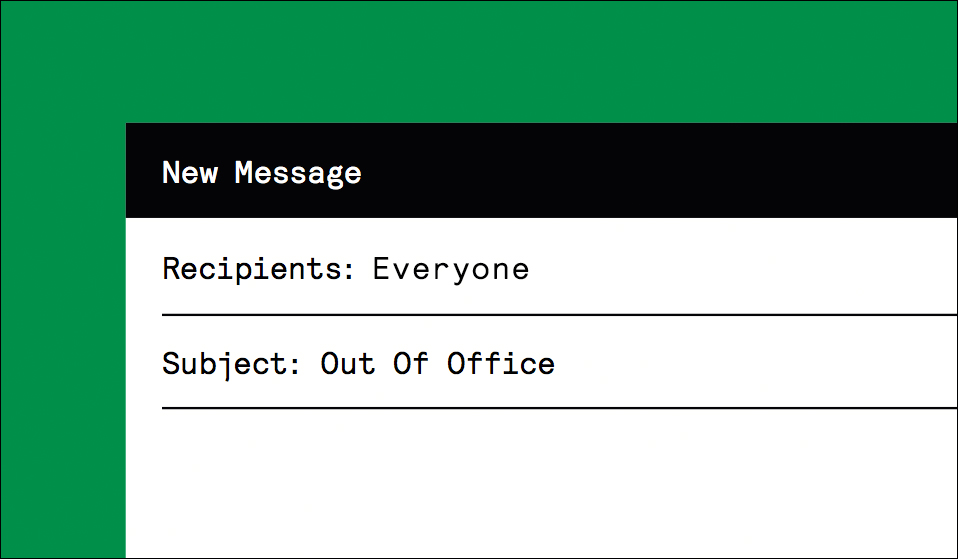 Modern work-culture has given rise to an unfortunate phenomenon: the Out Of Office message, a stopgap measure where ‘off-grid’ no longer means ‘off-limits’. But through tiny acts of rebellion, we can start reclaiming our downtime.

Modern work-culture has given rise to an unfortunate phenomenon: the Out Of Office message, a stopgap measure where ‘off-grid’ no longer means ‘off-limits’. But through tiny acts of rebellion, we can start reclaiming our downtime.

Before leaving work for her Christmas break in December 2017, Dr Erin Williams gave herself a life-changing gift. Instead of setting her standard Out Of Office email, the University of Edinburgh lecturer wrote something different in the auto-reply box. She stared at the screen and paused as her hands hovered over the keyboard.

“I am currently on annual leave and will be out of the office until January,” she began, as most of us do. “Any emails received during this time will be automatically deleted. If any item requires my attention, please resend in January.”

Erin now sets this OOO whenever she takes a holiday. In all of that time, she has deleted hundreds of emails – but only two people have ever re-sent their message on the day she returned to work.

“It’s been quite illuminating to realise the vast majority of emails I received didn’t actually need my attention,” she says now. “If it’s urgent and you’re not there, you can’t deal with it anyway. Everything else can wait.”

Despite what your boss might tell you, there is no such thing as an urgent email. There are emails marked urgent, and there are emails followed up by more emails that imply urgency. But it is impossible for something to require immediate attention and also have that attention delayed via the typing and sending and “As per my last email”-ing of back-and-forth messages.

Despite this obvious truth, we live in a world that incentivises the pretence that emails are urgent, and nowhere is this sham exposed more than in the OOO.

There are multiple victims every time an OOO is set. While it can be a liberating feeling to switch one on, “Out Of Office” now rarely means “out of reach”. According to YouGov research, six out of 10 of us check our emails while on holiday, despite the fact that eight out of 10 of us wish we could “completely switch off”. By writing OOOs with standard lines like, “Intermittent access to email,” and, “If urgent, please contact me on my mobile,” we are ruining our own time off.

“More and more people are disregarding what a vacation means – I’m taking it because I’m tired,” says Lauren Smith, a 28-year-old personal assistant to a real estate magnate in New York. Last year, Lauren went to Palm Springs, California, for a week’s break. She left her mobile number in her OOO for any “urgent” problems.

“[To me, urgent means] if my boss is dying or someone else in his family is hurt and trying to get in touch with him,” says Lauren. Yet despite this, her holiday was repeatedly interrupted – most egregiously when a reporter called to ask questions about her boss. “Unless he’s keeled over or his kid is in any kind of trouble, leave me alone!” she says now.

The second victim of OOOs are the co-workers you leave behind. Most auto-replies now include a line like, “In my absence, please contact my colleague Todd” – meaning your holiday becomes someone else’s burden. 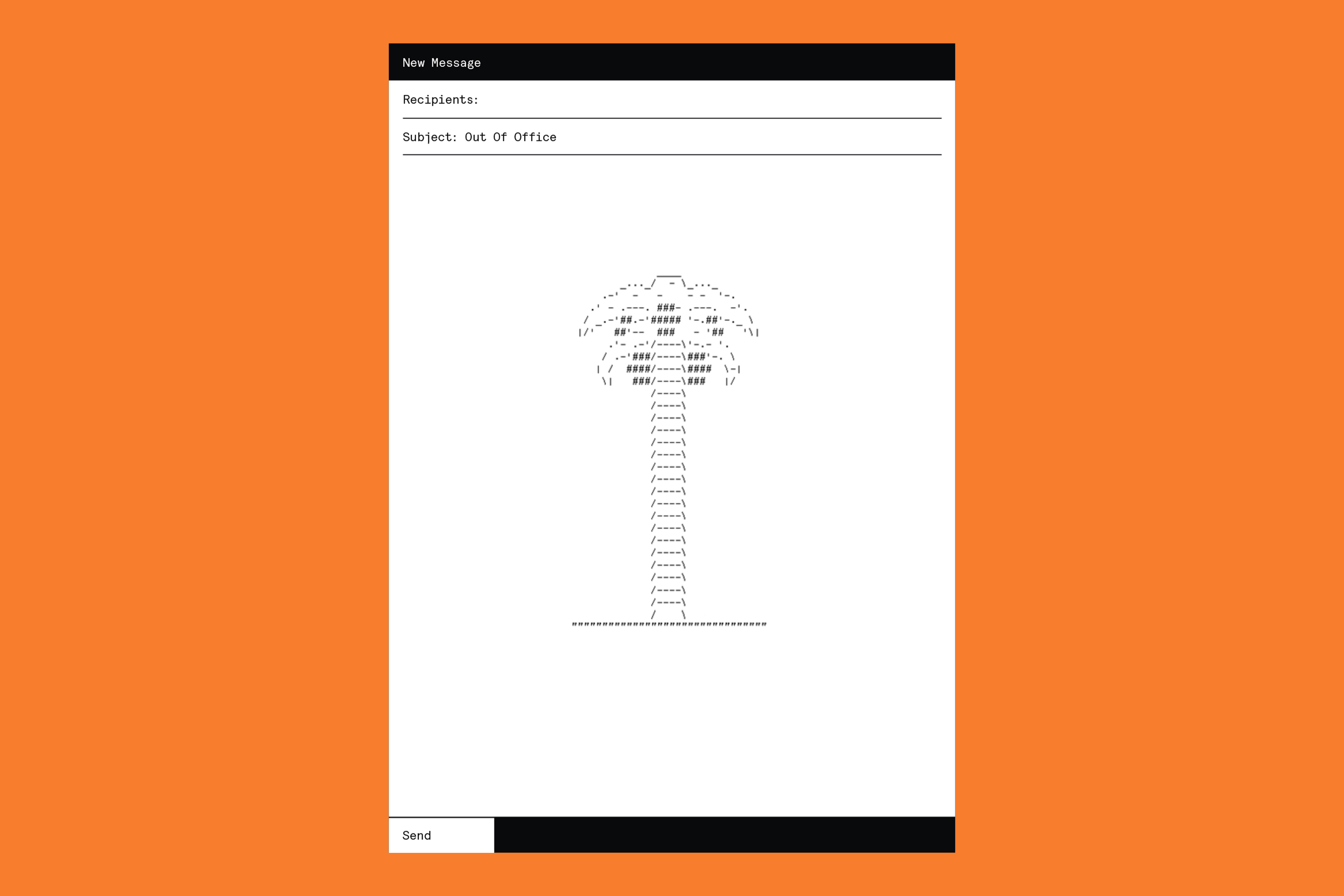 Nearly everyone who has suffered the fate of being set as someone else’s OOO contact has a horror story, whether it’s not getting a heads-up and logging in to hundreds of emails; being the designated point-of-contact for your co-workers over Christmas despite the fact that you’re off too; or emailing your boss with an important question, only to be told by the OOO message that you’re the person you should contact for any urgent inquiries.

William Becker is an associate professor at Virginia Tech who studies how emails affect our physical and mental health. In a 2018 study, William found that the “mere expectation” of checking emails outside office hours damages our wellbeing, even if we don’t actually do any work as a result.

“Monitoring emails was really related to sleep problems and lower reports of overall health,” says William. He has also found that people’s romantic partners were less satisfied with their relationship and reported some anxiety when their partner was frequently checking email.

“You’re connected almost everywhere now; you can even go to a nice tropical island and have WiFi, and that email is still going to be there,” says William. In 2017, French workers earned the “right to disconnect” from emails after work, under the El Khomri law. In January this year, New York City Council explored the possibility of a similar ruling, but William doesn’t believe that legal changes are necessarily the answer.

“I don’t think the problem will be solved that way, it really needs to be a culture change. A company needs to have really clear policies,” he says – suggesting alternative ‘rules’ like confining emails to one set hour on a weekend.

“We found people were spending eight hours a week, after hours, checking emails – which is a whole extra day that the company thinks they’re getting for nothing,” William says. “We want organisations to realise there is a price for this… The fact the people are paying a cost will eventually come around to make them less productive or burn out.”

In the meantime, individual employees – like Erin, with her auto-deleting policy – are pushing back. But not all of us are in a position to get away with that. Instead, office workers are enjoying small but meaningful acts of resistance. In his previous job, Tony, a 35-year-old software tester from Cardiff, played an OOO trick on his boss.

“He had a tendency to forward email trails to me with ‘FYI’ and no other information, whether we’d had a conversation about the situation or not,” explains Tony. “I set an Outlook Rule up so that whenever he sent me an email, it attached his email and forwarded it back to him as an attachment, with ‘FYI’ as the reply text.” Tony set the rule for the entire week he was on holiday, although thankfully his boss saw the funny side.

Yet no one is quite as inspirational in their OOO habits as 26-year-old Anna, a young office worker with a bright, smiley demeanour. (Her name has been changed for reasons that will shortly become obvious.) A year and a half ago, stressed by multiple simultaneous deadlines in her office job, Anna set up an Out Of Office auto-reply. Only, she was very much in the office at the time.

“It really helped ease the stress of seeing dozens of emails flowing in – a bit like trying to throw out buckets of water from a sinking rowboat,” she says. Anna’s OOO reply would claim that she was travelling and therefore slow to respond to emails. She now employs the trick intermittently. “During particularly busy periods it’s really a blessing to get to ignore emails for a while.”

Amazingly enough, she has got away with it. “So far, no one external seems to have noticed – but I do get quite a few internal, ‘Hey, you forgot to turn off your Out Of Office,’ or, ‘Huh, I thought you were on leave’ comments from colleagues.”

Anna recommends her trick to anyone who can get away with it but, like William, she would also like to see a changing culture around how many emails we send and how quickly we are expected to reply. “Constantly beeping inboxes are probably my biggest source of work stress and guilt.”

While we wait for company policies to change, we can make adjustments in our inboxes. If you can, lose the words “if it’s urgent”, lose the addition of your mobile number, and lose the expectation that a poor colleague takes on your emails for a week. If you can’t, maybe just “lose” an email here and there, and stop spending unpaid hours in your inbox.

“I think that’s the message in our study,” says William. “You really need to take those hours and spend them with the people you care most about.”

Linkedin
RELATED ARTICLES
OTHER ARTICLES
A new edition of a seminal book brings together iconic images of the band onstage in their full glory and backstage in moments of unguarded camaraderie.
Thomas Hoepker‘s images taken during a road trip across America provide a searing social commentary about a divided country.
Finland-born photographer Sirkka-Liisa Konttinen looks back on her decades-long documentation of life in Northern England.
Proposals to introduce a minimum GCSE threshold for student loans will disproportionately affect those from marginalised backgrounds.
In the wake of the decision by the supreme court to overturn Roe v Wade, thousands of protestors filled the streets to express their rage and anguish.
The author discusses the all-consuming nature of heartbreak, and turning the experience into an incisive exploration of love and loss.