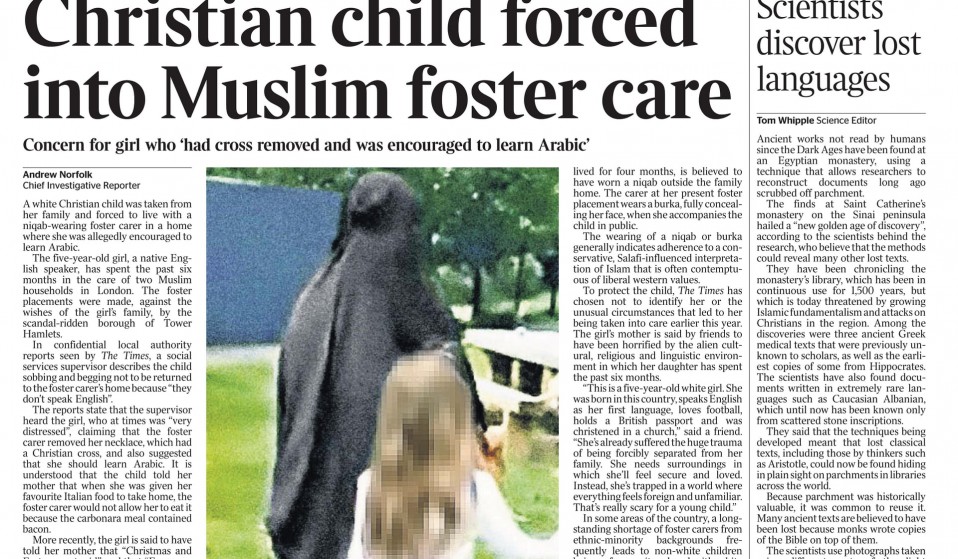 It took eight months for The Times to be held accountable for a series of front pages which may well have whipped up Islamophobia. It's too little, too late.

It took eight months for The Times to be held accountable for a series of front pages which may well have whipped up Islamophobia. Punishments must be harsher else nothing will change, writes Dawn Foster. Hidden apologies just aren't good enough.

You might have missed the small story at the bottom of the front page of The Times on Wednesday. With good reason: it’s placement, prominence and size was very different to the story it corrected, that spanned at least four front pages. Nearly eight months after the broadsheet first ran the scare story about a purportedly Christian child being forcibly placed with a Muslim family who treated her terribly, the paper were forced to publish a correction by the Independent Press Standards Organisation.

The story was picked up by multiple newspapers and broadcasters, with alleged details seemingly designed to stoke outrage. The girl was not allowed to celebrate Easter, we were told, and her cross was confiscated. English was not spoken at home. She was not allowed to eat her favourite food, spaghetti carbonara, as it contained pork. The request that she be placed with another family member was blocked. The girl was miserable and upset by the culture of the fostering placement.

The reports caused outrage in comment sections and Trevor Phillips branded the reported actions of the council in The Sun “worse than idiotic, and more akin to child abuse”. Except the reports weren’t true. Multiple facts were withheld or misreported to create a very specific interpretation of events to readers. The claims that the court had decided to place the child with her grandparent was not because of inadequate foster care: it was at the request of the council, not a reprimand to the borough, who had finally been able to undertake an assessment of her suitability to care for the child.

For a period, she had been out of the country. She was a Muslim, albeit non-practising, herself: the foster care was a temporary measure and its end was not due to a concern over the unsuitability of the placement. The girl was given Easter eggs during the placement, no foods were withheld on religious grounds, and her cross was given to her family for safe-keeping due to the inappropriate size for a child of her age and its high value.

The Independent Press Standards Organisation (IPSO) found The Times story gave the impression the court had admonished the council for the placement and removed the girl which was a ‘distortion’ of the situation, creating the impression her placement with a Muslim family had been negative and caused problems: social workers admitted she was happy and settled and well cared for. The newspaper claimed they withheld the details of the grandmother’s Muslim background over anonymity concerns – IPSO rightly point out if that was truly the case, there was no need for the foster carers’ religion to be mentioned.

The only reason it was, and the desired outcome, was to create a moral panic around cross-cultural fostering, specifically with Muslim carers. The story is dogwhistle in its framing and omission, depicting a small Christian child snatched from her family against their wishes and by a council in a heavily Muslim area, and forced to live with and adhere to the cultural practices of a practising Muslim family. In a review of the case published in October last year, the judge Khatun Sapnara said the maternal grandmother was “dismissive of the concerns and upset by them” and had a warm relationship with the carers, and the girl missed them.

There are too few foster carers in the UK already, and no serious person believes it wouldn’t be best to place children in a temporary home that reflects their religion and culture. But the dearth of foster carers and glut of children desperate for placements makes that a current impossibility. The Penny Appeal, a charity to encourage Muslims to become carers, estimates 1500 Muslim children are placed with non-Muslim foster carers at any one point. It’s impossible to imagine The Times or any paper running a days-long story decrying a Christian family caring for a Muslim child. The Times is likely to have put off many people considering fostering after the onslaught against the families and council staff involved.

The repercussions for the paper are minimal: the small correction on the front page, a larger one a few pages in. Online, it was impossible to view the correction without registering on their website: to find out what they’d done wrong, you have hand over your personal details and email address. No fine. And eight months have elapsed. What effect did it have on the lives of those involved, and what justice will they receive? How many people who read the initial stories will never see the correction? How many people have been the victim of Islamophobia or become more afraid of racial and religious hatred because of the sentiments the invective inflamed?

Any timid suggestion that the press submit to more regulation is always met with absolute histrionics from people within the industry. Speech should be free, but it should also be responsible: we’re constantly told the right to shout ‘Fire!’ in a crowded cinema shouldn’t be protected, and nor should deliberately inflammatory and false stoking of religiously-motivated hatred in the national press.

The regulator as it is, is toothless. Fact-checking is becoming easier, and a proper regulator should be able to investigate instantly when a story is reported to be false, not eight months later after the damage has been done. Fining publications heavily for persistent falsehoods might speak to them in the only way they know how, and demanding even greater prominence on considerable falsehoods than small corrections that can easily be overlooked. Free speech needs to be protected, but so too does the right of people not to have their lives completely ruined and pored over by the press: at the moment, the balance is not right.

Linkedin
RELATED ARTICLES
OTHER ARTICLES
With a new bill seeking to further criminalise asylum seekers, the work of a group of volunteers monitoring small boats in the English Channel is all the more vital.
Photographer Melanie Nissen recalls capturing the characters, fashions and rarefied chaos of a rapidly-expanding set of punk bands who helped to redefine the genre.
Ahead of the policing bill reaching its final stages in the Lords, protestors came together to rally against the legislation.
The musician, DJ and founder of Monika Enterprise reflects on a career defined by revolution and rule-breaking.
Leading art critic Robert Storr reflects on the photographers – from Seydou Keïta, to Malick Sidibé, to Carrie Mae Weems – who helped to transform and redefine the medium.
While the popular news aggregation service has been kicked off Twitter, its demise does not spell the end of digestible misinformation.