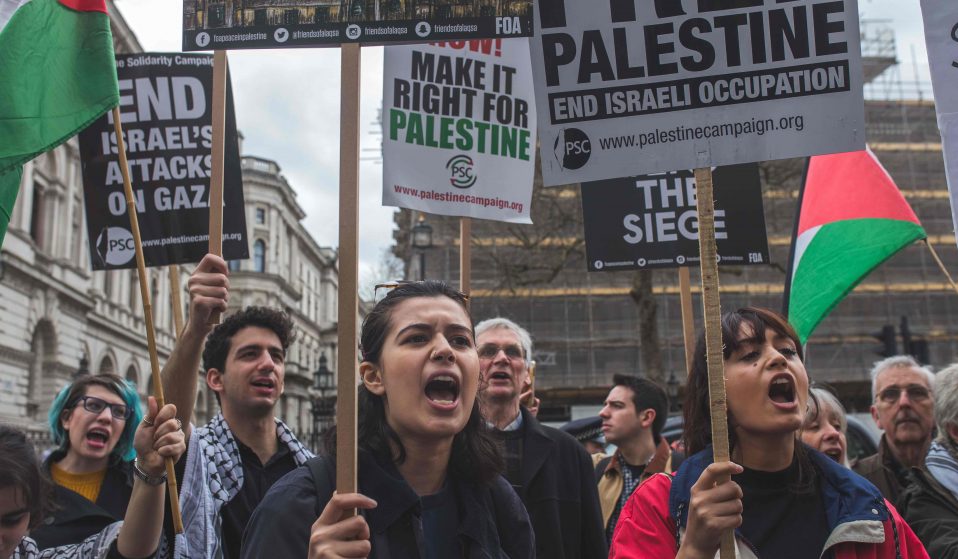 The peace agreement has been heralded as a breakthrough – but as long as Palestinian voices remain unheard, very little will change.

The ‘historic’ peace agreement has been heralded as a major breakthrough – but as long as Palestinian voices remain unheard, very little will change.

This week, the first commercial flight left Tel Aviv, Israel, bound for Dubai, United Arab Emirates. The flight comes just weeks after the signing of a historic peace treaty between the two countries.

‘Historic’ was the term used by both US President Trump, who helped broker it, and Israeli Prime Minister Benjamin Netanyahu. Described as a “full normalisation of relations” between the two Middle Eastern countries, the terms of the deal cover areas such as tourism, technology, trade and security in exchange for a halt on Israel’s annexation plans in the West Bank.

Annexation – the Israeli policy of occupying and taking over land that was originally Palestine – is a key source of friction, and one that has prevented the normalisation of Israel’s place in the region. So of course, the expectation with a huge ‘diplomatic’ breakthrough is that all those involved would understand the final details moving forward. But while Prince Mohammad bin Zayed, the crown prince of the UAE, emphasised that the deal was contingent on no further annexation taking place, Prime Minister Netanyahu, on the other hand, has said that the halt in annexation is merely temporary in deference to President Trump.

It’s clear that the three parties involved aren’t on the same page. With the kind of political history the region holds, there’s a long historical precedent that shapes the way this deal will play out – meaning Netanyahu’s vague diplomacy feels eerily familiar.

This deal makes the UAE the third Arab nation to establish diplomatic ties with Israel following Egypt in 1979, and Jordan in 1994. The peace deal between Egypt and Israel was preceded by the 1978 Camp David Accords: an agreement between Anwar Sadat, ex-president of Egypt, and Menachem Begin, the 6th Prime Minister of Israel, mediated by Jimmy Carter, the 39th President of the United States. Much like the recent deal, the Accords touched upon Israeli presence in the West Bank. But much like Netanyahu, Begin too seemed to change his tune.

The opposition to Sadat following Camp David grew exponentially – it would be one of the primary factors that led to his assassination in 1981 – but the leader stuck his ground. This is perhaps what made the years following the Accords all the more disappointing. The removal of Israeli military forces that was decided in 1978 never took place; neither did the establishment of a true self-governing Palestinian Authority (PA). Israel never let go of the territories’ security, using that power as a way to keep the PA in check.

In the case of both Egypt and Jordan’s deals there was little substance under the facade: despite what the parties involved would have us believe, the Palestinian element in both those instances did not exist beyond a clever marketing strategy. So there’s little reason to believe this time will be any different. The history surrounding the Palestine-Israel conflict is twisted and bleak, one that provides little hope for Palestinian voices being given the platform they need to make this work.

The Palestinian response to the UAE deal has unsurprisingly been dominated by outrage. Ahmed Majdalani, a member of the PLO’s executive committee called it a “black day” in Palestinian history. Nour Odeh, a Palestinian writer and analyst blames the UAE for using Palestine as a fig leaf. “Palestine did not factor into this,” she said.

What’s more, the new deal sees both the UAE and Israel give credit to the US almost too eagerly. The way both parties have shed responsibility further points to a discrepancy in what’s being said, as well as what’s being done. Why else would global leaders – who usually jump at the first chance of accolade – give up the credit to a third party?

Recent quotes from Jared Kushner illustrate just how big a role the US has played in this policy-shaping decision. “We’ve built a very trusting relationship with Israel. President Trump is committed to holding them (Israel) accountable, and Israel has agreed with us that they won’t move forward [with annexation] without our consent, and we don’t plan to give our consent for some time,” he said.

Statements like this highlight just how seemingly flimsy the safeguards against further annexations are. But just the halting of annexation is not seen as good enough. Palestinian officials have talked about how stopping future annexation also means recognising the annexation that has also taken place. With this deal, it seems that there is little hope – if any – for Palestinian demands to fully be considered, as Israel’s occupation of current Palestinian land continues to be accepted.

Kushner has claimed that the Palestinian reaction to the deal borders on ungrateful, but it is clear where their anger is coming from. Despite claims of Arab solidarity with the Palestinian cause, the Palestinian people have always felt excluded from discussions around their very existence. “I never imagined that in my lifetime I would see the day in which the UAE would simply sell the Palestinians out for the sake of normalisation,” said former Palestinian Authority Minister Munib al-Masri. The fact that the very allies they thought they could rely on are now stepping out of the fight means their demands have increasingly less weightage in the international arena.

The PA have outrightly rejected the new deal, and called out Arab states for not allowing Palestinians to have a say in the decisions that impact them most. “The UAE is not entitled to speak on behalf of the Palestinian people” it said. “We wont allow any party to meddle in Palestinian affairs”.

That’s what this issue has boiled down to for years. The oppression of the Palestinian voice. And until that is recognised, peace in the region can never truly be found. The precedent of these deals only make it clear that deals excluding the Palestinians have no chance of working – because there is no one invested enough to make it work.

Linkedin
RELATED ARTICLES
OTHER ARTICLES
The last few years have seen an increase in LGBTQ-led initiatives to feed the hungry, with many finding ways to stay afloat despite the challenges.
Proposals to introduce a minimum GCSE threshold for student loans will disproportionately affect those from marginalised backgrounds.
Thomas Hoepker‘s images taken during a road trip across America provide a searing social commentary about a divided country.
Yesterday queer activist group Lesbians and Gays support the Migrants staged a die-in at the Pride in London parade to protest the inclusion of police in the march reports Huck politics editor Ben Smoke.
Freddie Miller’s new series of photographs investigates who today’s trainspotters are and what drives their unfettered enthusiasm.
50 years since its inception, and the campaign calling for recognition that capitalism depends on domestic labour is as pertinent as ever.