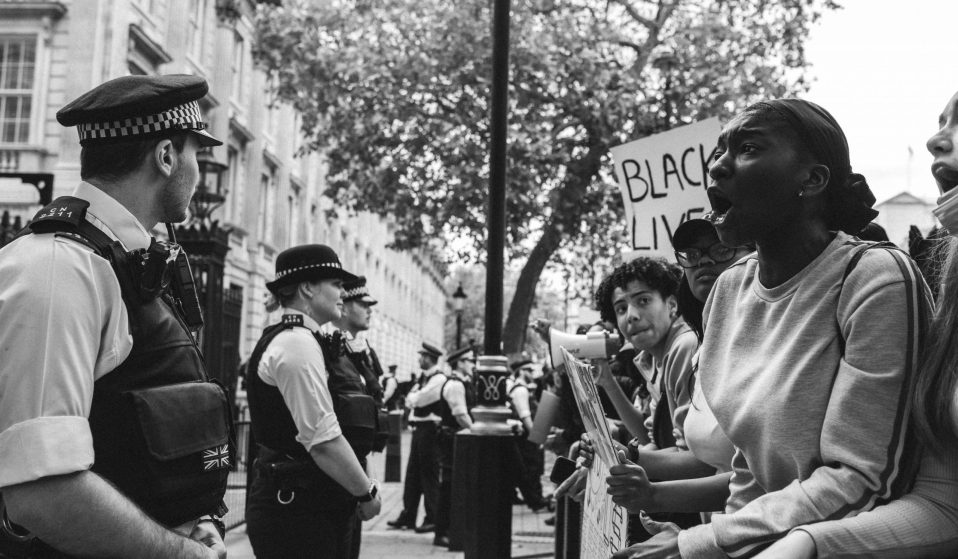 After almost a decade of worsening tensions and increasing harassment, writer and activist Phil Samba argues that it’s time to take radical action.

After almost a decade of worsening tensions and increasing harassment, writer and activist Phil Samba argues that it’s time to take radical action.

Last weekend, several hundred people gathered outside of Tottenham police station to commemorate the nine-year anniversary of the killing of Mark Duggan.

Duggan, a 29-year-old Black British man, was shot and killed by police in the North London town, sparking riots in August 2011. The unrest spread across London and 10 other cities in the UK. Over 3,000 people were arrested in connection with the rioting, and the sentences for those jailed added up to 1800 years.

It was not the first time the area has seen unrest in the wake of police violence. In 1985, on the Broadwater farm estate, Cynthia Jarret died from heart failure during a police search at her house. Her death saw tensions, already strained, erupt into a night of violence.

Speakers at last weekend’s protest were calling for an end to this over-policing of Black communities. They were asking police to stop the use of excessive force, tasers, and the disproportionate use of handcuffs during searches.

the crowd hold a two minute silence to remember the 1750 people killed in police custody since 1990 pic.twitter.com/d4NFG8RV1A

“We don’t feel protected,” rapper Wretch 32, whose 62-year-old father was tasered by police in his own house in June, told the crowd. “My dad did not feel protected. The police are supposed to protect and serve. When they came into the house, what exactly were they serving with that taser? I am saddened that we have to be standing here today. I feel that as a community, as a people, that we are over-policed and under-protected.”

Just a day after the protest, Dawn Butler, Labour MP for Brent, was racially profiled by police whilst her and her Black male friend drove through Hackney in East London. A day before, community outreach workers in Colindale were arrested when allegedly trying to peacefully intervene in the arrest of a 14-year-old boy.

In 1999, the McPhearson report declared the Metropolitan police to be institutionally racist and yet, two decades on, every day seems to bring a new instance of harassment, profiling or brutality. It’s in the context of this that many on Saturday were asking: what has changed in the nine years since Duggan’s death? Whilst Metropolitan police commander Cressida Dick seems to refuse to acknowledge that institutional racism exists in the police force and vows that stop and search helps to keep the public safe, young Black men like Duggan continue to be targeted.

Not only are Black people 40 times more likely than white people to be stopped, but between March and May during the coronavirus lockdown police officers stopped and searched almost 22,000 young Black men in London, equating to more than a quarter of all Black 15-24-year-olds. Over 80 per cent of the searches resulted in no further action, according to the chair of the home affairs select committee Yvette Cooper.

As a Black man born and raised in London who has been stopped and searched by police unnecessarily several times, I know what this experience feels like. I know what it means to be searched by police who are dumbfounded that I have never been arrested before. I know the looks on their faces when they find out I don’t have a criminal record. I know the distrust, the pain and the ill-feeling these stops create.

As Diane Abbott MP said in January this year, extending these stop and searches is a “tried and tested recipe for unrest, not violence reduction”.

“This draconian approach shows that Mr Johnson’s government has no real plans to invest in policing or a public health approach to tackling violent crime,” she continued. “They have opted to ‘appear tough’ instead of dealing with the root causes of crime. Evidence-based stop and search will always be a vital tool in preventing crime, but random stops have only poisoned police-community relations.”

These relations are only poisoned further by the existence of things like the Gangs Matrix, which was brought in after the 2011 riots. Nominally introduced to help reduce crime, human rights group Amnesty International labelled the database “racially biased”, claiming it was “criminalising a whole generation of young Black men”. Many who find themselves on the matrix have never committed a serious offence, and yet inclusion in the database can lead to expulsion from school, with many finding it difficult to access employment or housing.

Labour MP Dawn Butler has told Sky News she believes she was the victim of racial profiling after the car she was in was stopped by police in the London borough of Hackney.

Sky News has contacted the Metropolitan Police for comment.

Stop and search and the Gangs Matrix were introduced in an attempt to tackle violent crimes and protect communities but if gun crime and knife crime are at an all-time, this clearly isn’t necessary or even working. What’s the purpose beyond being a tool for the harassment of young Black people? What good are they serving?

As time goes on, and nothing changes, it’s becoming clear that radical action is needed. Defunding the police doesn’t simply mean getting rid of all police and violence and crime to suddenly stop. It’s about refunding organisations and initiatives who can do the work that’s currently part of the police’s remit.

Defunding the police allows Black people and communities to be involved in the conversation about what we need. It allows us to put time and money into addressing social inequality that has been created as a result of policing instead of solely investing in policing and prisons, perpetuating the cycle. We can’t wait until there’s another Mark Duggan, Cynthia Jarrett or Roger Sylvester. We have to act now, before another young life is lost.

Linkedin
RELATED ARTICLES
OTHER ARTICLES
Yesterday thousands gathered outside Buckingham Palace after news of the Queen’s death broke.
Financial turmoil is pushing people who work in the sex industry into more dangerous and desperate situations as a means of survival.
As the Scottish government announces a rent freeze, an activist with Living Rent who fought and won shares how they did it, and what must come next.
For over a decade, gamblers have won big by employing people to place live bets from the court. But does this dubious method still work?
Birdy Chu reflects on documenting the historic moment in which the territory was formally passed back from the UK to China.
Cindy Campbell recounts how her brother ushered in a new era of musical culture at a party she held in the Bronx in ‘70s.