News & Politics / Opinion / No, being kinky is not the same as being queer 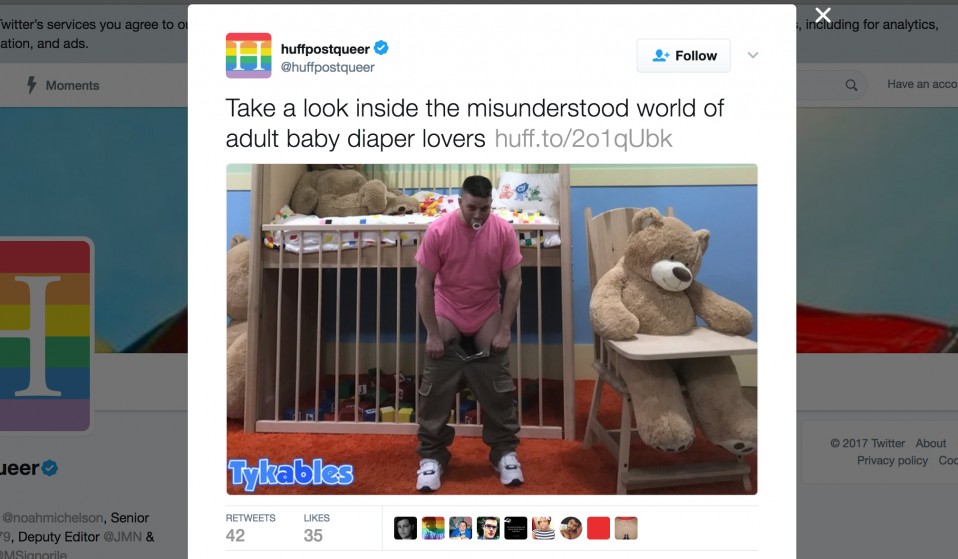 When the Huffington Post decided to included kinksters in their definition of queer they disrespected a community that has been involuntarily fetishised for years.

When the Huffington Post decided to included kinksters in their definition of queer they disrespected a community that has been involuntarily fetishised for years.

A couple of days ago, the Huffington Post Queer Voices Twitter account shared an article they’d published on adult diaper kinks. It was met with confusion by many of the account’s followers, with people expressing their discomfort at the publication’s choice to include kink as an inherent part of the queer umbrella.

From that moment onwards, the account engaged in a heated back and forth defending the opinion that “‘non-normative’ sexualities, sex and fetishes all fall under the queer umbrella”. They’ve now stepped back a little and posted this tweet:

But the matter still hangs in the air: should or shouldn’t kink be included on the spectrum of queerness?

It’s a complicated discussion because queer as a term is in itself supposed to be a fuck-you the concept of labels and definition, but let me tell you the answer anyway. No, being kinky and participating in alternative sex does not make you a part of the queer community.

This isn’t just a personal opinion, it’s a politically conscious statement. The identities of LGBTQ people have been equated to fetishes as a way to dismiss and invalidate them for decades, and relationships between queer individuals are still constantly hypersexualised, portrayed as fetishes for a straight audience to enjoy. Considering being kinky as something similar to being queer ultimately means continuing to equate queerness to the sex you happen to enjoy having, which would be a mistake.

Queerness is an all-encompassing thing – an act of political resistance through its very existence – not just a rejection of what’s considered “normal” through alternative sexual practices. To reduce the queer identity to that is an over simplification and an insult. Queerness steps outside these norms, and defies the gender and sexual binary. Being queer is about identity, and that is more powerful and goes far beyond the sex we do (or don’t) have.

If we’re getting etymological, the word ‘queer’ was used for decades to ostracise and vilify individuals who weren’t straight; it’s a word that still makes some older people in the LGBTQ community shudder, and is still used as an insult today. As a word that has caused trauma to our community, it is only ours to reclaim and use as something empowering.

Being kinky doesn’t put you on a census, doesn’t keep you out of bathrooms, and it doesn’t get you thrown into conversion therapy as a pre-teen. Liking handcuffs does not mean young people in your community are four times more at risk of committing suicide than those who aren’t into handcuffs.

A straight man who enjoys being spanked very, very hard and likes to wear leather dog masks might feel hesitant talking to his girlfriend about his preferences, but that doesn’t mean he experiences life as a queer person. He is not at risk of violence in the street for his identity. He does not see people like him being murdered every day, neglected by a system that disrespects their gender identity even in death. He does not have centuries worth of violence and corrective rape inflicted on people with his identity to carry on his back.

Being for an open discussion on sex and sexual practices that stand outside of what is considered average by church-led sexual education is fantastic, promotes safety, and should be encouraged. Your kink preferences, given they are practiced with consenting and of age partners, are fine and should be respected, even celebrated. If you are into kink you can certainly be supportive of the LGBTQ community, and there may well be some overlap. All of this does not however give straight, cisgender people the right to identify as queer, or insert themselves into queer spaces, regardless of how many chains they have in their bedroom.

Assuring that our spaces, kinky or not, which we have fought for and are still fighting for around the world are not inherently hypersexualised and appropriated is not playing the so-called ‘Opression Olympics’. It’s ensuring that everyone who is a part of the queer community is taken into account and feels safe.

So no, being kinky does not make you queer.

Linkedin
RELATED ARTICLES
OTHER ARTICLES
As the role of the nuclear family is increasingly called into question, people are finding new ways to exist outside heterosexist norms.
The internet furore surrounding a certain NY-based furniture designer should make us question whether condemning people in the harshest possible terms harms more than it helps.
While the popular news aggregation service has been kicked off Twitter, its demise does not spell the end of digestible misinformation.
Photographer Melanie Nissen recalls capturing the characters, fashions and rarefied chaos of a rapidly-expanding set of punk bands who helped to redefine the genre.
In the UK, Hongkongers are continuing to stand in solidarity with the pro-democracy movement.
In 1984, Martin Shakeshaft set out to document the miner’s strike as it really happened, using his photography as a tool for activism.