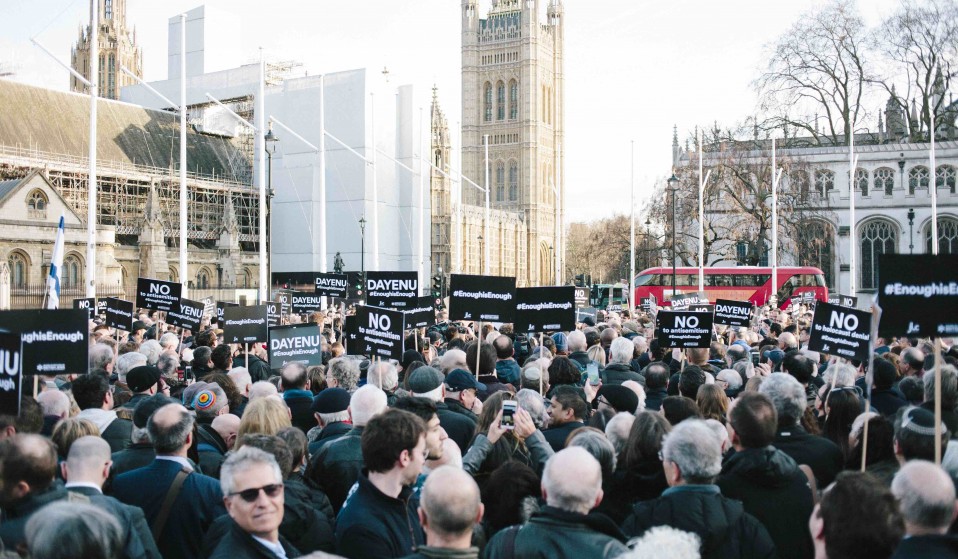 While some self-proclaimed progressives are clearly anti-Semitic, many are simply ignorant and unaware. The answer is education, writes Owen Jones.

The past week has exposed some uncomfortable realities within the labour movement. A handful of self-proclaimed progressives peddle anti-Semitic conspiracy theories, while a larger number are simply ignorant and unaware. The answer, writes Owen Jones, lies in serious political education.

A small minority of people on the left hold anti-Semitic views. A wider group of people deny that this anti-Semitism exists at all. Right-wing elements within the Labour Party, as well as the Conservative Party and the right-wing press, are weaponising the issue to attack Jeremy Corbyn’s leadership. All three of these statements are true. That doesn’t mean the first two statements are not deeply troubling. They are, and together they reveal a crisis of political education in the labour movement and the left as a whole which must urgently be addressed.

Here’s what disturbs me. Let’s begin with the now notorious mural, which Jeremy Corbyn has rightly said is anti-Semitic. The reason that it is anti-Semitic is that it deploys an almost definitive anti-Semitic trope – hooked nosed money-obsessed Jewish financiers making their ill-gotten gains off the backs of the exploited. As Mear One, the artist responsible for the mural, himself put it: “some of the older white Jewish folk in the local community had an issue with me portraying their beloved #Rothschild or #Warburg etc as the demons they are.”

I’ve read online self-described leftists talking about a “Jewish lobby”. An open letter describing a Jewish-organised protest as the work of a “very powerful special interest group” has rightly been denounced by Shadow Chancellor John McDonnell as “an anti-Semitic stereotype”. Why? Because the notion of a Jewish clique wielding sinister disproportionate power is the anti-Semitic trope par excellence. Online, Jewish leftists such as Jon Lansman has had vile anti-Semitism flung at them by purported socialists. A Labour council candidate was revealed to have shared a post denying the Holocaust. Sadly, I could go on.

The response from some Corbyn supporters goes like this: Anti-Semitism is being used to shut down all criticisms of Israel. I write here as a passionate opponent of the brutal, illegal and immoral Israeli occupation of Palestine. As someone who was once threatened with violence by a former Times journalist at a wedding on the basis that my pro-Palestine politics made me an “anti-Semite”.

Another response is to say, well, anti-Semitism is not specific to the left. Of course it isn’t. Some seem to believe that anti-Semitism is exclusive to Nazism, that it appeared in 1933 and vanished again in 1945. In fact it has a 2,000 year pedigree – of pogroms, expulsions, blood libel, murder – and it is rooted in our cultures. Anti-Semitism and anti-Semitic tropes are disturbingly widespread. Polling suggests it is slightly more prevalent on the right than on the left. The so-called “alt-right” often use these tropes.  That George Soros is the Jewish puppet master pulling the strings and subverting political systems everywhere, is a favourite right-wing conspiracy theory which was peddled recently by the Daily Telegraph. The Spectator publishes articles defending the neo-Nazi Golden Dawn party.

That is besides the point. The left exists to eliminate all forms of bigotry, oppression and exploitation. That is our function, our historic mission. We have a unique responsibility to get our house in order. Like a man who describes himself as a feminist and uses that fact to claim he couldn’t possibly be sexist – and therefore fails to interrogate his own behaviour – it is dangerous for a leftist to believe ‘I’m left-wing so how can I be a bigot?’ Our movement must have the highest possible standards if we are to create the equal, free and just society we are working for: we must be less bigoted than the society we wish to replace.

Here is how I understand the problem. Socialism ceased to exist in Britain as a mass political force for a generation, possibly longer. In 2015, although the appetite and potential for left-wing politics already existed, socialism suddenly re-emerged as a mass movement and a contender for political power, and two years later, it was consolidated. But from the start there was always an extremely weak institutional and intellectual underpinning for it.

The active labour movement was hollowed out. The traditional Labour left had almost ceased to exist: all that was left were near insignificant fragments, where the same old faces appeared at sparsely attended conferences year on year.

Labour’s parliamentary left was nearly-irrelevant. Corbyn himself did not want to take the reigns of the party, and stood out of a sense of duty to the cause. Educating the newly politicised was hobbled by the fact that the left, such as it existed, had largely retreated into a defensive posture, defined by what it was against (cuts, privatisation, war) rather than what it was for.

And then, suddenly, a huge number of people came into politics for the first time. A tiny number are cranks and conspiracists. Whilst a leftist sees capitalism as a series of power relations, conspiracists see the world as being run by individuals in the shadows secretly pulling strings.

Rather than looking at Big Finance as a system, they focus instead on, say, the Rockefeller or Rothschild families. That’s why conspiracism and the horror of anti-Semitism have such a powerful connection. As a whole, prejudice against Jews on the left manifests itself as the fusion of left-wing concepts (taking on exploitative and oppressive elites) with anti-Semitic tropes.

But a much larger number just lack political education, because they were suddenly brought into radical politics in an era in which socialism had been irrelevant for so long. From day one of Corbyn standing for the leadership, the party membership were in perpetual siege mode, and for good reason: an almost universally hostile media and constant plots by a parliamentary party, most of whom regarded Corbyn’s leadership as a political nightmare.

With much of the party membership feeling under constant siege, every issue seems like an attack on Jeremy Corbyn. And in the sense that anti-Semitism is indeed being weaponised – that opponents of the Labour leadership are using the issue as a convenient attack line to undermine it – they are correct.

In 2016, there was a drip of revelations of anti-Semitism in the Labour Party – which mysteriously and abruptly ceased as soon as the local elections ended. This did not indicate a serious commitment to the necessary struggle against anti-Semitism, which was to some, let’s just say, secondary to opposing Corbyn’s Labour

None of this means anti-Semitism is not a problem on the left, because it is. Challenging and defeating anti-Semitism is not only the right thing to do: those resisting such a necessary struggle are providing an almost constant source of fodder for Corbyn’s opponents, and seem almost oblivious to this.

This is combined with the fact that, quite frankly, many people simply do not understand what anti-Semitism is: its history, its tropes, its subtleties. As a test, I showed the mural, which to me is self-evidently anti-Semitic, to some people who aren’t politicised: I had to explain to them why it was.

Ironically, those denying left-wing anti-Semitism are themselves on a collision course with Labour’s own leadership. “I recognise that anti-Semitism has surfaced within the Labour Party,” Corbyn wrote in a nuanced letter to the Jewish Leadership Council and the Board of Deputies of British Jews, “and has too often been dismissed as simply a matter of a few bad apples.” It condemned the age-old so-called “socialism of fools” which deploys conspiratorial tropes of Jewish capitalists and financiers exploiting workers.

I have written to the Board of Deputies and the Jewish Leadership Council. I will never be anything other than a militant opponent of antisemitism. In this fight, I am an ally and always will be. pic.twitter.com/QhQnFEpplU

What’s the solution? Firstly, Shami Chakrabarti’s report on anti-Semitism in Labour, produced two years ago, has an excellent set of recommendations. They have not been implemented by party officialdom: that is not acceptable and must be the absolute priority of incoming Labour General Secretary Jennie Formby, who privately talks about it as a defining mission.

But there is a wider point: we need to confront the crisis in political education. The party should set up an institution to directly address it. It would train up political education officers for Constituency Labour Parties across the country. Part of its mission would be a proper, thorough education in anti-Semitism – its history, its varied manifestations, the hurt it causes Jewish people. It would be part of a comprehensive education while in opposition and in government: in misogyny, homophobia, transphobia, Islamophobia, other forms of bigotry and racism. Momentum could play a critical role in this grassroots political education.

This would replace any conspiracist nonsense with a worldview which looks at our society through the prisms of systems and power relations. It would embed a socialist perspective in the movement which would defeat anti-Semitic tropes and long outlast Corbyn’s leadership. It really is long overdue.

Linkedin
RELATED ARTICLES
OTHER ARTICLES
Ahead of the policing bill reaching its final stages in the Lords, protestors came together to rally against the legislation.
As the role of the nuclear family is increasingly called into question, people are finding new ways to exist outside heterosexist norms.
In 1984, Martin Shakeshaft set out to document the miner’s strike as it really happened, using his photography as a tool for activism.
Those set to be impacted by the governments ’undemocratic’ bill explain why it risks silencing them.
In Glasgow, life expectancy is reduced by 15 per cent. In a new project, photographer Kirsty Mackay reflects on the lives cut short.
The musician, DJ and founder of Monika Enterprise reflects on a career defined by revolution and rule-breaking.