News & Politics / Opinion / If Labour loses this election, MPs still criticising Corbyn must take a share of the blame 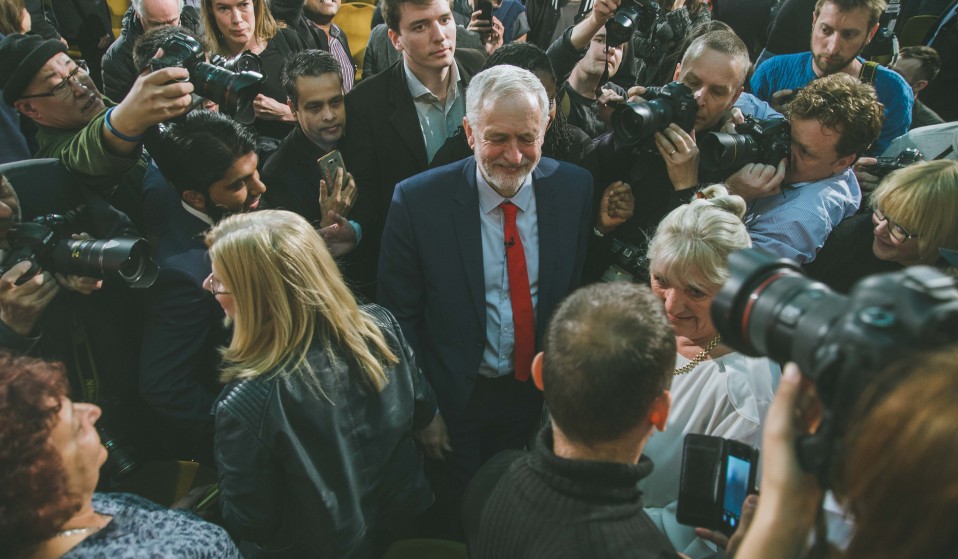 Corbyn's critics in Labour have long said it's because he is 'unelectable' that he must stand down. Now it's clear that some just don't like his politics.

Jeremy Corbyn critics in Westminster have long said he is unelectable. But now, as a general election gets underway, it's finally clear that its his politics that some Labour MPs want to fight against. It's a kamikaze mission that cannot end well.

It’s no secret that a fair number of MPs in the Labour Party are less than pleased to have Jeremy Corbyn as their leader. It was an uphill struggle for the then backbencher to even make it onto the leadership ballot paper back in June 2015, reliant on a host of his fellow parliamentarians who professed not to support him for nominations to hit the threshold needed to get in the race.

Since then the frustration of his colleagues has  anything but died down; there have been coups, briefings against him and calls for his resignation in abundance. But despite his critics, some might even argue because of them, he’s survived.

There have been no successful attempts to unseat him, when asked again whether Labour members wanted him as their leader his mandate was bolstered, popularity clearly confirmed. But until Tuesday – with no forthcoming opportunity to see Labour take its message to voters – those members and MPs with little faith in Corbyn’s administration saw no reason to settle down. They hoped that by the time 2020 came around for the next election, he’d be long gone. The swipes and the campaign against him continued.

But when Theresa May announced last week the upcoming June general election, there was a hope on most sides of the Labour Party that now, finally, this might die down. As a party of opposition, with no election in sight, it was unsurprising (even if deeply tiring) to see those opposed to the more progressive type of politics that Jeremy’s tenure represents continue to fight him.

But when Labour hit the campaign trail it seemed possible they’d do so united as one. For just a few weeks they’d all come together, the opportunity to take power from this right-wing Conservative government too important an opportunity to miss.

And yet as campaigning gets underway for this snap general election, there are those in the Parliamentary Labour Party still obsessed with their own kamikaze mission of contempt. It seems the likes of Ilford North MP Wes Streeting, John Woodcock MP too, would rather a Conservative government return to power than a Corbyn led Labour party get its turn.

You see, there was a time when Labour MPs opposed to the politics of Corbyn would make a single, clear argument against his leadership; that of him and his ideas being unpalatable to British voters, unelectable in the extreme. Current polling suggests this might well prove to be the case in this election, although of course it’s possible for Labour to defy the odds and take back control of Number 10. But it was his electability, not his politics mandated by Labour’s membership, they seemed to take issue with.

But now we’ve got free school meals for primary school children on the table from Labour, four new bank holidays for all of us to partake in too. The nationalisation of the railways and a £10 minimum wage just some of the other headline policy offers from Corbyn’s team. it’s a progressive set of ideas that everyone in the party should be able to unite behind.

But asked today on Sky New whether  Corbyn would make a good leader of the country, Labour MP Wes Streeting continued with his line of attack.

“I’ve said before that I don’t think he would,” he told the presenter. “I’m not going to pretend to have had a damascene conversion.”

At a time when the country is voting on its next five years of governance, this is a naive answer at best, much more sinister and alarming if you give him the credit.

Because with these announcements, these policies that could undoubtedly make life better, that little bit easier, for so many living in Britain today, we see the true colours of some of Corbyn’s Westminster critics come shining bitterly through.

No longer are they stating that they don’t think Corbyn’s Labour party is electable, they’re saying they don’t like him,  nor what he stands for, that for him to be in power would not be a result to celebrate at all. It’s not that Jeremy can’t make it into power, now they say they don’t want to see that happen too, whatever the consequences. What else can their moaning achieve?

Those in the Labour Party and outside of it are growing weary of this inward looking sniping, the naval gazing and leg spreading that sees politicians whining about internal politics not focussing on the bigger, real battle outside.

And yes, Corbyn, McDonnell and their comrades were rampant critics of many past Labour leaderships, but when it came to campaigning they were loyal and they were present. Labour members in London who backed Corbyn took to the streets to help elect now London Mayor Sadiq Khan into office, Corbyn and McDonnell refused to insult Ed Miliband in the midst of the 2015 general election campaign.

In less than 46 days there’ll be a general election, this country once again asked to go to the polls. Until then Labour needs to come together, makes its case to the electorate, and hope that in this unstable climate the underdog can finally come through.

Should Labour fall, no doubt Corbyn’s leadership will be questioned once more. But before then the likes of Streeting must put aside their past comments, and focus on the fundamental idea that all Labour members (until now) all seemed to share: that it would of course be better for the next government to be red than blue.

There should be no space for anyone in Labour – MP or otherwise – who can’t see that this makes sense.

Linkedin
RELATED ARTICLES
OTHER ARTICLES
Author Edward Banches dicusses his new book, which examines the hard rock and metal scenes in five African countries: Botswana, Togo, South Africa, Kenya and Ghana.
A new film from Berghaus traces the story of Adam Raja, who left behind a turbulent upbringing to discover the healing power of climbing.
Photographer Becky Tyrell went down to the fading banger and stock raceway to meet a community desperate to keep it alive.
A new law change is enabling Britain’s donor-conceived children to know the truth about their origins – but campaigners say the fertility industry must do more to protect people.
Activists and campaigners are fighting back against new laws that would seriously undermine the ability to take industrial action, calling it an attack on fundamental workers' rights.
At his West Bank restaurant, Fadi Kattan established himself as the voice of modern Palestinian cuisine. Now, he’s bringing his innovative, bold flavours to the UK’s capital.