News & Politics / Opinion / If Corbyn’s Labour wants to call itself pro-worker, it must be proudly pro-migrant too 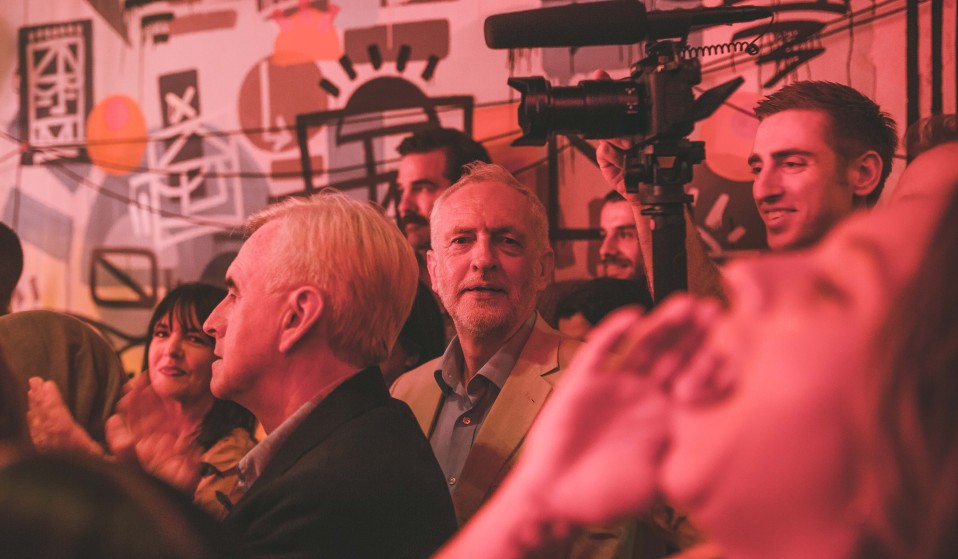 The press might be hyping up an off the cuff remark from Corbyn about migration hurting workers, but Labour must stick to a principled, pro-migrant stance.

The press might be hyping up an off the cuff remark from Corbyn about migration hurting workers, but Labour must stick to a principled, pro-migrant stance, argues Eleanor Penny.

Heady on the relief of finding some non-disastrous economic measure to brag about, the UK government is fond of talking up our record-high employment figures, which hovers at around 72%. These headline figures gloss a rather unhappier picture; one of zero-hours contracts, precarious work, poor workplace conditions, and plummeting pay. Real-terms wages have plummeted over 10% in the last decade. Indeed, we’re vying with our Greek neighbours for the unenviable title of ‘worst pay growth in the EU’. (In the foggy and uncertain world of economics, it’s a good rule of thumb that a comparison to Greece is rarely a good sign.)

Never ones to let a good disaster go to waste, anti-migrant demagogues have made much meat of this misery – warping genuine economic plight into a tale of the endless indignities heaped upon the (white, British) working man by an out-of-control migration system. It’s an easy story to spin. When more people are clamouring for your job, it’s easier for your boss to fire you, so you might be more likely to put up with bad pay or conditions. Especially when those other people are migrant workers willing to do the same work for lower wages.

This basic mathematics that gets blindsided by the repeated studies that the impact of migrants on wages is minimal. But sometimes a complex truth is outgunned by a simple lie. Indeed, this story has gained such public traction – that the top brass of the labour party have merrily followed in disastrous footsteps of Miliband, who carved ‘Controls on Immigration’ onto his own political tombstone.

In an interview this weekend, Jeremy Corbyn said freedom of movement has allowed the “importation of underpaid workers from central Europe in order to destroy conditions” in the UK.

Now the media is ready to declare a force 9 hurricane every time Corbyn sneezes, the reaction has been predictably caricatured – but that doesn’t diminish the fact that the soft-nationalism of Labour’s Election Manifesto also attempted a similar move – trying to triangulate some anti-EU sentiment by capitulating to the vacuous claims that migrants, rather than unscrupulous bosses, are to blame for working misery.

The EU’s relationship to worker’s rights is ambivalent – as the EU itself hulking monstrosity of contradictions. There are people who will tell you it’s a key institution defending Human Rights, and there are people who will tell you it’s the apotheosis of neoliberal ambitions to easing the flow of capital across borders. They’re both kind of right. But this much is clear: the EU really does indeed have a hand in falling standards of in-work protections. But freedom of movement isn’t the culprit here. EU free trade agreements – including the notorious TTIP have seen an attempt to ‘normalise’ or ‘standardise’ industry practises across countries. This is a polite euphemism for reducing workers rights to the lowest common denominator, taking the most paltry in-work protections as the industry standard. Though TTIP itself has now been shelved, it hasn’t laid to rest similar free trade ventures.

On a domestic level, too, leaders have unapologetically trained their crosshairs on unions – including those darlings of pro-EU liberalism Merkel and Macron. Our government is no exception – from introducing lower wages for the young to the Trade Union Bill, it’s spent the past seven years fuelling slow-burning bonfire of workers rights, under the auspices of ‘cutting red tape’ and ‘unshackling businesses’ from the yoke of regulations. Membership of the EU did nothing to prevent this, and – despite certain flagship policies like the working time directive – any pro-worker government would find an uneasy ally in the institutions of the European Union.

Again, none of this is the fault of free movement, or the migrants it has brought to our shores. It’s the result of successive governments who have, at a national and supra-national level, defended the interests of businesses which would prefer not to be troubled by the responsibility of paying people a decent wage with decent security. This dynamic happily marches on irrespective of the actual levels of migration; recently net migration has fallen, whilst living standards and pay conditions have continued to dwindle. The common factor is not how many foreigners are cluttering up the UK – it’s the fact that the government has continued to privatise, to cap pay and ‘cut red tape’.

The problem isn’t migration per se – it’s legislation that allows opportunists in the business world to turn an influx of migrants into an opportunity for a quick cash-grab; businesses can only indulge in the “wholesale importation of underpaid workers” because we allow them to do so. Only combatting these practises can hold back the slow march to a fat-cat business dreamscape where in-work protections are a distant memory. The real gag is that the people on the frontline of this battle are themselves migrants – who, often bound into precarious positions with few safety nets, are reliably caught on sharpest end of exploitation-friendly legislation.

From cleaners in UK universities to agricultural workers in Tuscany, migrant workers have been organising to claw back some of the basic workers provisions such as a living wage, sick pay, and the right to a fair employment tribunal (which in the UK can set you back nearly a month’s pay). These migrants aren’t the sleeper agents for a globalist agenda to drag down pay and conditions. They’re out on picket lines fighting the bosses who are really to blame.

Crammed as it is with union hacks and lefties, you would be forgiven for assuming that the Corbyn project would be thrilled at the thought of workers tackling exploitation head-on — a rising tide that could lift all boats. But it’s chosen instead to bind itself to a confusing middle ground, which “refuses to scapegoat migrants” openly, but will also blithely normalise the rhetoric of right-wingers who aren’t held back by similar hangups. Strategy wonks in the Labour Party, always at the mercy of ‘public opinion’, are haunted by the spectres of the Brexit vote, fearful of combatting an insidious common sense that uncontrolled migration is a menace.

The irony is that strategically recruiting anti-migrant rhetoric isn’t a guarantee of electoral success, but a high road to nowhere. In the grand game of migrant-bashing, Labour is simply outclassed by UKIP and the Tories, neither of whom depend for their existence on retaining the good will of multi-ethnic, metropolitan city centres amongst whom this brand of crypto-UKIPpery goes down about as well as does a rousing chorus of left-wing anthem the internationale in a Young Conservatives port & policy evening.

Enough of this craven, milquetoast electioneering. Labour has not previously shied away from challenging the received wisdoms of the Tory administration; that austerity is necessary, that privatisation injects efficiency into a bloated public. It must do so again with the migration question, re-entering the debate not on the exploited migrants, but on policymakers and employers who permit this exploitation. If the Labour party wants to call itself pro-worker, it must also be brave enough to call itself pro-migrant too.

Linkedin
RELATED ARTICLES
OTHER ARTICLES
Protestors gathered outside Downing Street following the latest atrocities committed by Israel against Palestinians living in the besieged strip.
A series of photos by the late Jerry Dantzic taken in 1957 show a tender side to the iconic Jazz musician.
Students are being left to languish in unsafe housing, in some cases leading to serious health complications.
Yesterday, rail workers came together to protest poor pay, working conditions and job cuts in their latest round of strikes.
A new series of photos by Johny Pitts shines a light on communities and subcultures that have all too often been overlooked.
As the Criminal Bar Association enters its fifth week of action, criminal barrister Russel Fraser explains why the legal professionals have walked out and how action is likely to escalate.