News & Politics / Opinion / Gay people are still being locked up in Britain. What use is this pardon to them? 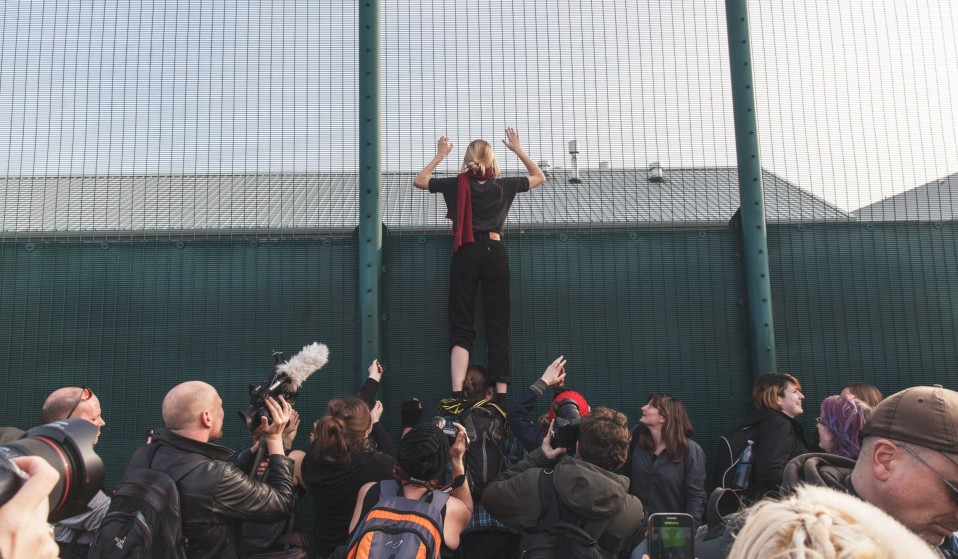 Before you celebrate this government pardoning dead white gay men, remember the United Kingdom still deports LGBT people to countries where it's unsafe to be queer all the time.

Before you celebrate this government for pardoning dead white gay men of now legal same-sex activity, remember tonight they'll be deporting a gay Nigerian man to a country where it's illegal and dangerous to be gay. And this happens all the time.

Today it was announced that our beleaguered British Queen, currently engulfed in a dispute about whether she would be thoroughly embarrassed or utterly delighted to host President Trump in a forthcoming visit to the United Kingdom, has found time to give her Royal Assent to the Policing and Crime Act 2017. The Act will, among other things, retrospectively pardon thousands of gay and bisexual men of now-abolished sexual offences, following the precedent set by the pardoning of the wartime code breaker, Alan Turing, back in 2013.

Whether the timing of this assent was deliberate or not is unclear – but it may prove useful, given that it occurs the day after nationwide protests against the Prime Minister and her government. These protests intended to call the government to account for its silence and complicity regarding Donald Trump’s recently enacted ban on people from seven countries entering the United States.

The reason the seemingly unrelated news of the ‘gay pardon’ may be prove good PR for Theresa May and the Tories is due to a tendency in the West for LGBT rights to be proudly waved by conservative governments as indicators of their social conscience and the liberal narratives of progress which conservatism always wishes to sell to voters.

We should be cautious, however, in the tone of delight and victory the media has already adopted about the news. In the same hours as this pardon was granted, it emerged that activists were desperately trying to stop the deportation of several Nigerian asylum seekers from Stansted Airport on Tuesday evening.

In a blog trying to raise awareness of this, it is alleged that one of those to be forcibly removed from the UK is a gay man, Oyekunle, who is to be deported illegally as his case has not been fully heard by the Home Office. In Nigeria, same sex sexual activity is punishable by up to 14 years imprisonment, and LGBT people enjoy no legal protection – often facing violence. In some areas of the country the penalty is death.

While the precise details of this case cannot be fully verified, it is undoubtedly true that they fit into a wider pattern of the UK government’s detention of queer and trans asylum seekers, the intrusive and harmful nature of its asylum process, and its willingness to deport many of them back to their countries of birth.

In November 2016, a joint report by the charities Stonewall and UK LGIG titled”No Safe Refuge” was published, and it found repeated abuse of LGBT asylum seekers in British detention centres by fellow detainees, the unpleasantness of officers, and their consequent mental health problems.

In 2010, 99% of LGBT asylum seekers were refused. Since then things have marginally improved, but grim continue to emerge. In 2015, Jamaican asylum seeker Orashia Edwards was asked to provide investigative officers with images of him having sex with a man to prove he was bisexual. Since then, questions about gay sex have been banned, but asylum seekers can still be quizzed on connections to their local ‘gay scene’ as evidence – despite the fact that the £10 a week in cash provided to those waiting for cases to be decided upon is unlikely to facilitate much in the way of nights out at drag bars.

The case of Oyekunle, coming as it does amid a global climate of suspicion and fear of refugees – many of whom are LGBT – stands in stark contrast to the symbolic gesture of the pardon announced on the same day.

The reality is that the UK still locks up gay people and treats them like criminals – now it’s merely that they happen to be the ones without the benefit of whiteness or citizenship. The reception of these pardons when first announced were mixed.

George Montague, himself convicted of gross indecency in 1974, received media attention for saying he wanted an apology, not a pardon. His position is understandable, given that no Act of Parliament can take away the pain, stigma and trauma of the State’s crimes against gay men. But even the mere gesture serves to disguise the reality that this State violence on queer people is not at an end – it is still happening now. Our Prime Minister has overseen its architecture for years.

Even as Parliament extinguishes the sordid memory of past governments’ cruelty, it doubles down on new cruelties. For anyone who is LGBT, and welcomes the news of the pardon, our solidarity must now be with all migrants – especially those who are queer and remain outside this new and contingent safety from State violence – one which still too few of us enjoy.

Linkedin
RELATED ARTICLES
OTHER ARTICLES
David 'Dee' Delgado’s photo project is about honouring and uplifting the city of his youth, and a world rapidly disappearing under the relentless onslaught of gentrification.
Taking us through one of the most dynamic years in recent history, Laylah Amatullah Barrayn new photo book contains tender yet confrontational portraits.
The pro skateboarder withdrew from the 2020 Olympic Games so he could come out as trans. Now, he’s hoping to encourage others to live as their authentic selves – within the sport and beyond.
From snake handlers to mardi-gras revellers, Tom “TBow” Bowden’s photos provide a snapshot of the wonderful and weird people who make up America.
Zsófia Sivák’s ongoing project documents the country’s tavern culture, preserving a once defining part of rural life.
After a two-year hiatus and a new album, the Nigerian artist is riding high. Now, he wants to bring his alternative, genre-bending sound to the world.