News & Politics / Opinion / LGBT History Month? Our struggle isn’t a thing of the past 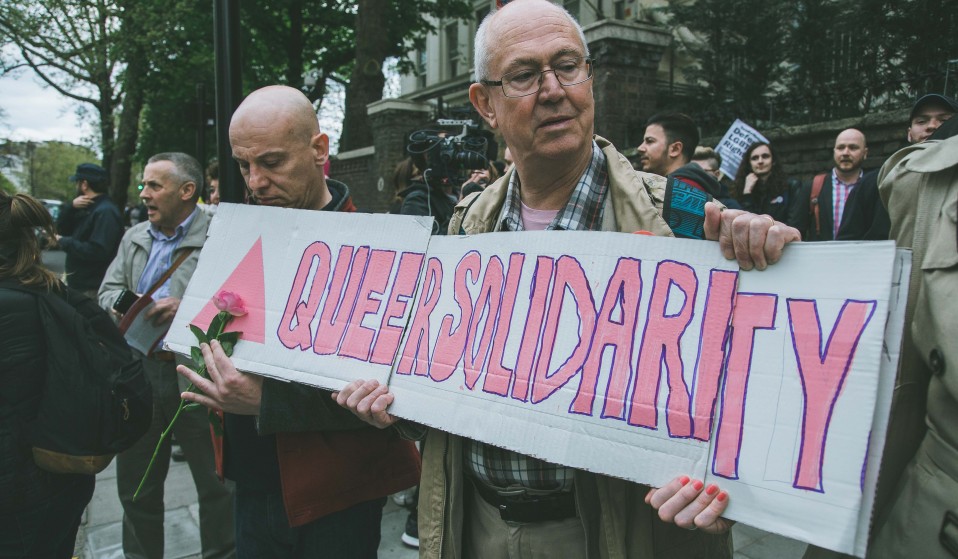 Queer people should remember the fight isn't over this LGBT History Month, writes James Butler. In fact, it's not yet even in the past.

Queer people should remember the fight isn't over this LGBT History Month, writes James Butler. In fact, it's not yet even in the past.

A couple of years ago I went to see avant-garde queer cabaret legend David Hoyle perform at one of his regular stints at London’s Royal Vauxhall Tavern. It was in some ways a perfect snapshot of the contradictory state of LGBTQ+ culture today: a torrent of scabrous, loving invective, a hysterically honest attempt to ring our collective alarm bells, delivered in a legendary venue at risk of being tuned into a taupe-painted champagne bar with a tumour-like block of luxury flats squatting above it.

Yet I noticed the room bristle as the evening wore on. What began as a slew of relatively easy targets for the audience – no-one wants to think of themselves as a vapid, Kylie-infatuated ageing twink, after all – began to provoke the uncomfortable shifting feet, crossed arms and poker faces of the offended, as David described feeding parasites and politicians into a woodchipper, ending with Her Reptilian Majesty, Elizabeth II, being lowered into the chipper’s grinding maw. I heard a tut from next to me, as a heavily biceped man with the face of an estate agent drew up his jacket and walked out.

That kind of gadfly reaction is Hoyle’s mark of success, but it left me thinking about the political ills of today’s  LGBTQ+ community, and its prim, sanitised relationship to its own history. As LGBT history month rolls around again, full of well-meaning events with a slight tang of worthiness to them, I find myself longing for an angrier, less detached, less sanitised vision of queer history – the kind of history which sees a living link, suffering, proud, impatient, between yesterday and today.

It is possible to end up playing a caricature of a queer radical when writing about this, so to avoid doubt: it is of course a good thing that we have made legal and political progress, that we can marry and adopt and live relatively freely. Those battles were hard-fought. But picket fences and pugs weren’t the only vision of our LGBTQ+ predecessors: they saw sexuality as deeply bound up in structures of power and exploitation, and dreamed that sexual emancipation would mean the explosion of those structures.

Well, things ain’t so easy as that. The feminist theorist Nancy Fraser describes our age as one of ‘progressive neoliberalism’, in which dominant social and political structures can incorporate the struggles of marginalised groups while leaving untouched its vast inequalities and burnishing its progressive credentials. It is of a piece with the attitude that says the struggles of yesterday – with their marches, their confrontations, their loud dissatisfactions – were justified by the scale of injustice, but no comparable struggle exists today. If we have not quite arrived at utopia, then it is only a couple of stops away on the tube, a couple more floors up to the boardroom.

One of the inevitable consequences of any successful political movement is the eventual emergence of a new generation who reap the benefits without being defined by the struggle: the close links which seemed obvious to our predecessors between left-wing politics and gay liberation may seem less clear today.

And yet for all the real progress, homophobia is far from dead: at the moment a young neo-Nazi is on trial in Leeds for planning the murder of gay people celebrating Pride at a pub in Barrow – foiled only at the last moment ; in the recent case of Grindr serial killer Stephen Port, police failed again and again to draw a link between the deaths of his victims because of a deeply-ingrained prejudice about gay men’s lifestyles; our Prime Minister presided over the deportation of gay men to their deaths as Home Secretary and continues to do so as head of the government. The struggle is not over, but its landscape has changed, not least as many of the same moral panics directed at gays and lesbians a few decades ago have been dusted off and directed at trans people instead – there is a fight which deserves gay men’s unstinting solidarity and respect.

If one of the lessons we can learn from our queer ancestors is linking the struggle for recognition with struggle against wider social and political conditions, then they have some more uncomfortable lessons for LGBTQ+ radicals too. One thing that becomes clear every LGBT history month is the unique relationship queer people have in relating to their history: very rarely are queer teenagers the children of queers parents, so almost universally we come to a consciousness of ourselves through our representation in mass culture, often through a painstaking secret decoding of sexual ambiguity, and the uncovering of queer cultures unmentioned in school or textbooks.

Moreover, the decimation of an older generation during the epidemic phase of the AIDS crisis, and mass gay culture’s subsequent obsessive, wounded cult of eternal youth, has rendered communication across the generations somewhat stunted.

Not only is this a shame because of the number of extraordinary examples of everyday solidarity in the darker chapters of our past, but because the radical thought of our predecessors might offer another way between the nihilistic hedonism of the eternal chillout, the Stepford goosestep and teeth-bleaching of the militantly normal, and the prim moralising and competitive fragility of much of what passes for contemporary radical thought.

Struggling for moments of queer joy in the teeth of violent homophobia, many of our predecessors saw more clearly than us that it is phenomenally difficult to unlearn the complexes of shame, self-destruction and self-loathing with which we grew up; that establishing genuinely radical communities of shameless solidarity and care required intense effort, both discipline and passion. More, the most clear-sighted queer authors, whether novelists or theorists or activists, saw sexual desire as an intense and dangerous force, one capable of toppling capitalism and patriarchy, maybe, but one just as capable of overmastering us, always closely bound up with transgression, always pushing through the cracks of repression. They took desire seriously, not for granted.

So, this LGBT history month, perhaps it’s time to look back at everything our past has to offer us, every uncomfortable truth, so we can turn to our second-rate compromises, our untransformed society, our still too timid demands for real equality and say – into the woodchipper with it all!

Linkedin
RELATED ARTICLES
OTHER ARTICLES
Photographer Sean Maung reflects on documenting a small town in Pennsylvania afflicted by high levels of unemployment, poverty, violence, crime, and addiction.
From snake handlers to mardi-gras revellers, Tom “TBow” Bowden’s photos provide a snapshot of the wonderful and weird people who make up America.
David 'Dee' Delgado’s photo project is about honouring and uplifting the city of his youth, and a world rapidly disappearing under the relentless onslaught of gentrification.
A new podcast is opening up the conversation between trans women and trans amorous men in the hope of building coalitions.
A new film from Berghaus traces the story of Adam Raja, who left behind a turbulent upbringing to discover the healing power of climbing.
After blocking the Scottish government’s gender recognition reform bill, Westminster is now devising further changes to the law to make it harder for trans people to self-identify.