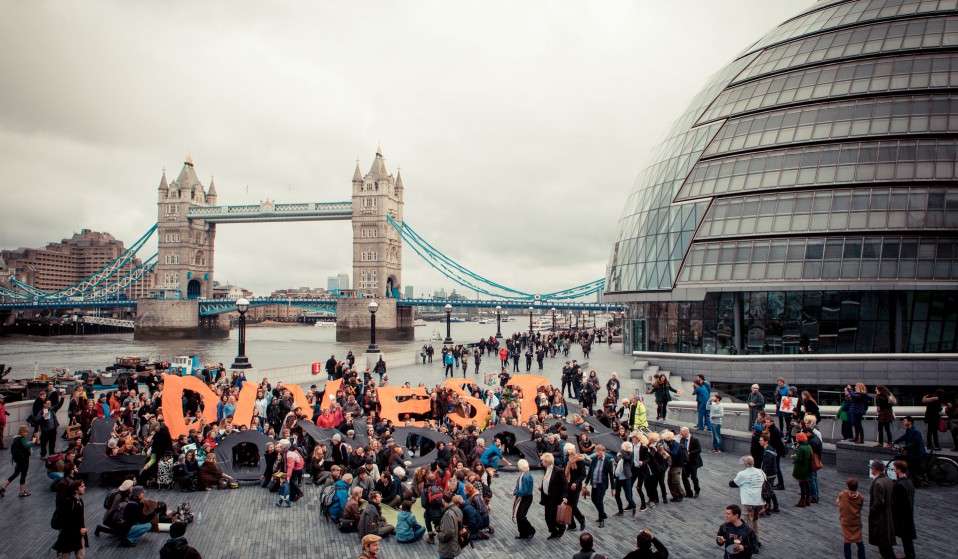 Across the United Kingdom, local authorities are risking the public's cash, pensions and futures on dirty fossil fuel investments.

Across the United Kingdom, local authorities are risking the public's cash, pensions and futures on dirty fossil fuel investments.

Roll up, roll up, the annual climate change conference circus is in town again. While government ministers make a good show in Bonn, their mates back home are supporting fossil fuels more than ever.

New data analysis by campaign groups Platform London, 350.org and Friends of the Earth Scotland and England, Wales and Northern Ireland shows that local government pensions invest over £16 billion in the fossil fuel corporations driving climate change, like BP and Shell. It found that most councils have not responded to international agreements to curb climate change and are gambling with pensions by failing to address the risk of plummeting fossil fuel company share prices. Greater Manchester, Dumfries and Galloway, Torfaen, Hammersmith and Fulham authorities are among the most exposed to fossil fuel investments.

But some councils are rising to the challenge. Waltham Forest and Southwark pension funds have committed to fully divest their pension funds from fossil fuels, while Hackney are going half way. Waltham Forest Councillor Simon Miller, who was Chair of Waltham Forest Pension Fund when they made the commitment, says that: “Given current pressures on Local Authority budgets, our pension funds have a key role to play…as driver of sustainable, future focused investment in local areas.” Other local authorities are already doing just that. Lancashire County Council put £12 million into Westmill Solar Co-operative, a community owned solar farm.

Despite the lip service paid by ministers in Bonn, national energy policy is in disarray. According to official government figures, 2.5 million households are in fuel poverty while the Big 6 energy companies, operating as a cartel, have hiked prices this year by as much as 15%. Relying on the market and corporations to set fair prices and take action that threatens their business model seems doomed to failure. BP and Shell have failed to move to renewable energy and are planning for a catastrophic 3-5 degrees of warming. While fossil fuel corporations’ profit soar, our government actually paid oil companies $312 million to drill in the North Sea because of subsidies and tax breaks.

The realisation that privatised companies running our energy system (and water and transport systems) are unaccountable, polluting and not investing in a clean, just future could explain the popularity for new models of public ownership. Some 77% of people support our energy system being publicly owned.

Some local authorities like Nottingham and Bristol have taken matters into their own hands and set up their own public energy companies to provide affordable energy. Campaign group Switched On London is pressuring Mayor of London Sadiq Khan to deliver on his promise for a public energy company for Londoners and the Scottish Government has just announced its own plans to set up a publicly-owned Scottish energy company.

However, when it comes to energy generation we are rapidly losing control of our resource. Just over half of the UK’s offshore wind installations are owned by public entities – but they are almost all foreign ones. The German city Munich owns one of our largest wind farms. A recent report by Labour Energy Forum revealed that the UK public controls 0.07% of current offshore wind capacity – that’s one single wind turbine off the coast of Scotland.

Public ownership of offshore wind could be a huge opportunity to revive coastal communities, create tens of thousands of jobs, and build an ongoing public revenue stream. Public companies – run by our councils – can cover rooftops with solar and build offshore wind farms and do it cheaper than the big six. They can be truly accountable to citizens, share benefits with the public, create a million decent jobs and repower UK industry.

The climate transition is happening already. The question is: will it happen fast enough and who will be the winners shaping this new future and who will lose out? Will we end up bailing out fossil fuel companies through the public purse to save pension funds? Will renewable energy be privatised from under us robbing us of decent jobs and affordable energy? We need to take back our pensions wealth and resources if we are to own our future.

Mika Minio-Paluello is an energy economist and Sarah Shoraka runs campaigns for divestment and against gas mega-pipelines. Both work for Platform London.

Linkedin
RELATED ARTICLES
OTHER ARTICLES
As she gears up for the release of her first book, the 24-year-old climate activist talks standing up to authority and building a more inclusive movement.
After building his reputation covering the US civil rights movement in the 1960s, the photographer went on to produce some of the most enduring images of the past century.
A new film from Berghaus traces the story of Adam Raja, who left behind a turbulent upbringing to discover the healing power of climbing.
Tristan O’Neill’s shots of dancers caught in moments of reverie at the height of rave’s golden age are a testament to the UK’s legendary club culture.
Social prescribing connects people with non-medical support to improve their health and wellbeing – but some experts worry it’s just a stick plaster solution.
A new law change is enabling Britain’s donor-conceived children to know the truth about their origins – but campaigners say the fertility industry must do more to protect people.