News & Politics / Opinion / Luxury London is a vision of hell 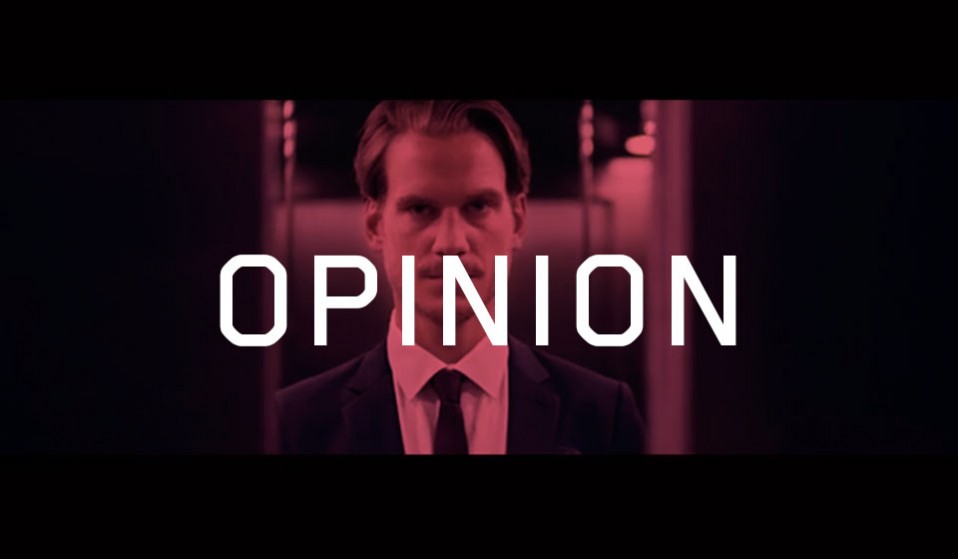 What kind of future do we want for our cities if elitism and sexism helps sell 'The Dream'?

What kind of future do we want for our cities if elitism and sexism helps sell 'The Dream'?

If you live in London, absurdist advertising for new housing developments are an all too familiar pain in the arse.

EXHIBIT A: A lean, Savile Row suited übershite gazes across the city’s towers from the floor to ceiling windows in his apartment musing on his conquering of the market – before turning to cast a lustful eye over his dominion – which includes the pert maven he sexually harassed in a lift and who now slumbers in post coital ecstasy in his raw linen sheets.

This kind of irritation is the bastard heir to a globalised economy and booming property market. Time and time again you’ve seen the show ponies of this newly rising London leer at you demonically through expensive dental work. “This is not YOUR city,” they seem to whisper. When property developers Redrow recently put out an American Psycho-inspired promo for their ‘London Collection’ properties, the web finally called bullshit and they were forced to pull the campaign. Within a week, another ad surfaced that likened the “sensuous curves” of luxury flats One Blackfriars (“delicate, elegant, perfectly formed”) to a voiceless woman archaically cast as a bit of eye-candy. But the world turns. You block it all out as you cycle to your bullshit job in The City and carry on saving for that deposit. But will this image-led assault on your ability to better yourself ever lead to visceral anger? Will the barricades ever be manned again?

It’s hard to deny that the recent surge of extremely high-end property development has reached new levels of intensity. The consequences are real (least not for the communities that are being forcefully evicted to make way for this new homegrown Dubai). It’s no secret that the arcane and inexplicable ‘non-dom’ tax regulations run by HMRC over the last couple of decades have led to London becoming a haven for the transnational rich. London’s tax breaks and spiralling property values make the tight-ass traditionalism of private Swiss Banking seem archaic, upstanding – quasi-Victorian. This England has been flogged to the highest bidder – and the sale has come free of troublesome taxes and with a coquettish glint in it’s avaricious eye.

But tenant-free, capital-accruing towers that exclude anyone without a six-figure deposit and an eye on the futures market are one thing – but when you look at the consequence of this sort of flux on the fabric of our cities the outlook becomes even darker. American Psycho-inspired ads are just the tip of the iceberg of a fully fledged aesthetic assault on London’s identity on behalf of the international wealthy. The lens through which these developments are marketed flattens perspective and obliterates all light, shade and texture – it eradicates the patina of London’s cultural geography and renders the city in the sort of hi-gloss lacquer that is dreamt up in focus groups and manifests in the prefabricated marketing suites that each of these developments features.

Try going into one of these places some time. It’s a horrible glimpse of a near-future London. There are glass cases replete with scale renditions of an estate agent’s hermetically sealed demi-Eden (always with a token nod to ethnic diversity and that cheeky London irreverence, guv!) The besuited haircut with the heavy-rimmed Tom Fords will take you through the 24 hour concierge services and the underground parking offered by these properties (concealed by security that keeps the real city at bay). As they fill your cup with that single origin Java they will tell of a rapidly developing investment opportunity and its blue chip letting potential. They will show you floor plans that reflect a design ethos whose starting point is return-on-investment rather than the ability to create liveable, sustainable community.

The connective tissue here is exclusion; the founding values dystopian.

The most sinister and pernicious aspect to these new developments is the way that by making it impossible for anyone but the extremely wealthy to live there, they are erasing entire neighbourhoods, and the cultural memory that there once resided. As we’ve said before, London’s inner-city environs have always evolved, the poor generally radiating outwards as their circumstances improve. Each of these populations has left their traces before being replaced with a new generation of the huddled masses. But the difference here and now is that these developments are unshackled from the sort of regulation that in another lifetime oversaw the growth of public housing. This has in turn meant that zero infrastructure has been developed around these gnomons of wealth. There are not enough public sector schools to cater for its residents; there are not enough free medical facilities to serve them. Not only as a consequence are these ghettos destined to regenerate themselves over and over as temporary homes for a strata of wealthy people in transit, the pressure it puts on local services encourages the knee-jerk fascism promoted by the populist right and provides succour to the apologists’ private medicine and education.

The wrong people become scapegoats for the wrong problems – and for the all the wrong reasons.

If London’s future is to be a violently stratified dystopia with barrios full of the childless hyper wealthy then that would be one thing. But the consequence of this sort of pressure on an already shrinking foothold for ordinary earners means that this sort of aesthetic violence may one day lead to visceral anger. If it does, Redrow’s vision of hell may have come, then, to ugly fruition.

Linkedin
RELATED ARTICLES
OTHER ARTICLES
Hundreds gathered together to protest the policing bill by making as much of a racket as possible.
Photographer Melanie Nissen recalls capturing the characters, fashions and rarefied chaos of a rapidly-expanding set of punk bands who helped to redefine the genre.
In Sheffield, food delivery drivers are fighting back against one of the giants of the gig economy.
Despite the easing of Covid-19 restrictions, the issue of over-policing on university campuses remains.
From the queues outside to the last ones standing, Francesco Mellina’s new photo book follows a night that has gone down in the Northern-Soul history books.
From Brooklyn gang members, to Welsh miners and the residents of East Harlem, Bruce Davidson used his camera to shine a light on the most marginalised.