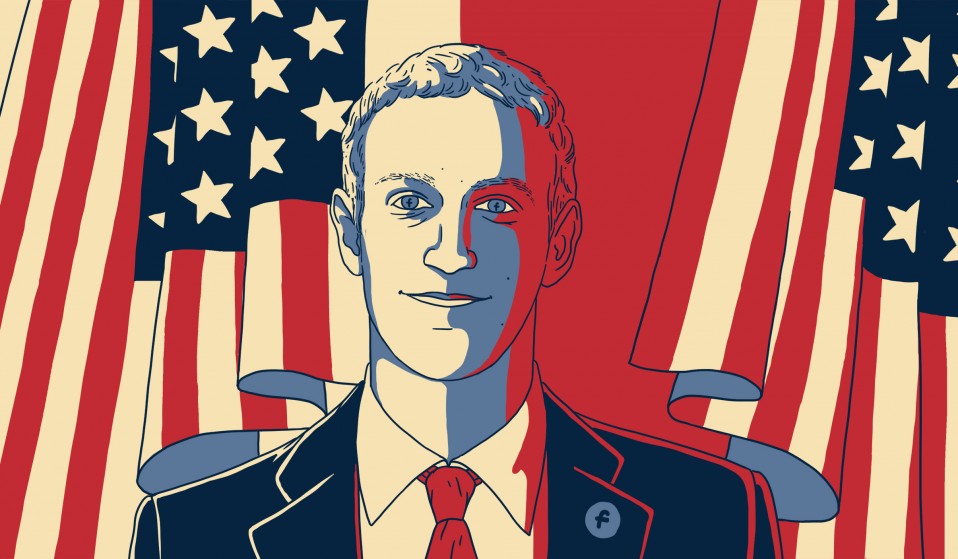 Separating Mark Zuckerberg from Facebook is impossible, and a quick look at the company should make all of us worried about the prospect of President Zuck.

Separating Mark Zuckerberg from the monolith he has created is an impossible task, and a quick look at Facebook's approach to politics and business should make all of us worried about the prospect of a President Zuck, writes Alex Robert Ross.

Mark Zuckerberg says that he’s not going to be running for President of the United States, but that doesn’t mean you should believe him. He has hired former Republican National Committee chairman Ken Mehlman and former Obama/Clinton campaign manager David Plouffe over at the the Chan Zuckerberg Initiative, the philanthropic organisation that Zuckerberg runs with his wife, Priscilla Chan.

He’s also currently in the middle of a year-long, 30-state trip across America, where Charles Ommanney – the photojournalist who captured Barack Obama and George W Bush’s first terms in the White House – snapped him meeting Real Americans at diners, in coffee shops and on ranches. Zuckerberg shook hands and smiled and took pictures and listened – he wants you to know that he listened. On his tour, the 33-year-old has looked detached and full of wonder. He stared at machines; he did not know what to do with his arms; he liked to drive the big red tractor. Facebook has even cleared the way for him to run for public office while retaining his control of the company.

Commentators are lining up behind him. Over at the New York Observer, Kevin Currie has written a piece urging Democrats to get behind Zuckerberg if they’re to stand any chance of defeating Trump in 2020. (You don’t need to read it. It’s just 3000 words of Currie finding new ways of saying, “he’s rich”). At Vanity Fair, Nick Bilton made his peace with a Zuck presidency as far back as January. His defence: “…there may be no one tougher than a billionaire nerd who likes playing Risk.”

How exactly Bilton came to this terrifying conclusion isn’t clear – ultra-wealthy nerds with a mind for global domination are traditionally more suited to the role of cartoon villain than presidential candidate. But, while the Democratic Party fumbles around for anything approaching a coherent platform to challenge the most incompetent President in history, it’s time we talk about what exactly a Zuckerberg candidacy might mean.

Zuckerberg’s politics aren’t easily cut into one of the two parties. He has donated money to Republicans Paul Ryan and Marco Rubio; he’s also donated to Democrats Chuck Schumer and Cory Booker. As a philanthropist, Zuckerberg has given money to hospitals and schools, as philanthropists tend to.

But there’s no link between that money and any political ideals. Zuckerberg gave money to stem the spread of Ebola – that doesn’t mean he’s in favour of expanded health care in America. In any case, there are questions that need answering around Zuckerberg’s promise to donate the vast majority of his wealth to charity in his lifetime. Setting up a limited liability company seems an odd way of going about it.

As the CEO of Facebook, though, he’s given us more of an insight into his political mindset than any donation could. Zuckerberg founded Facebook and modelled it around his own ideals. He continues to set the company’s agenda today. And in the era of the billionaire CEO President, we should start pulling that apart early.

Take “Building Global Community”, a strange January missive from Zuckerberg on Facebook that was read like a political manifesto. He wrote about “traditional institutions” and “social fabric”; he referenced, by name, Definitely Real People that he’d met, who told him things that backed up his fears for the future of our civilization (and the restorative powers of Facebook).

“Whatever your situation when you enter our community,” he wrote, “our commitment is to continue improving our tools to give you the power to share your experience. By increasing the diversity of our ideas and strengthening our common understanding, our community can have the greatest positive impact on the world.”

Zuckerberg talks about “community” a lot – that’s his word for Facebook’s two billion users – and “positive impact” is always close behind. The idea is nonsensical – members of the Facebook “community” share nothing beyond a common use of Facebook. But Zuckerberg’s idealism is more insidious than those corporate platitudes. The Facebook “community” isn’t a collective – it’s a potential data mine ripe for the harvest.

In the London Review of Books last week, John Lanchester broke Facebook’s history and business model down. Facebook’s revenue, he writes, is generated from the data it collects on its users and sells to companies that want to target adverts at them. “Even more than it is in the advertising business”, Lanchester writes, “Facebook is in the surveillance business. Facebook, in fact, is the biggest surveillance-based enterprise in the history of mankind. It knows far, far more about you than the most intrusive government has ever known about its citizens.” The purpose of all that surveillance, he writes, is “in the final analysis, profoundly bathetic. It is to sell you things via online ads.”

This isn’t just Facebook functioning without its CEO’s input; this is the company’s business model, as Zuckerberg intends it. He’s always spoken of this thirst for data into something that seems more palatable, of course.

In an interview with The Atlantic in Washington, DC in 2013, Zuckerberg was asked whether he was a Democrat or a Republican. He responded by saying that he was “pro-knowledge economy,” a bullshit term that he’s been refining for years.

https://www.youtube.com/watch?v=BUWmyGBEfVc&t=1 Zuckerberg was in Washington that day to meet House Republicans, lobbying for immigration reform as the founder of FWD.US, a non-profit political advocacy group. It was bipartisan in the truest sense. Public interest piqued when it turned out the group was funding two subsidiaries from opposite sides of the political spectrum: Americans For a Conservative Direction (Republican, anti-Obama, pro-Arctic drilling) and the Council for American Job Growth (mainstream Democratic, somehow still pro-drilling).

“FWD.us is committed to showing support for elected officials who promote the policy changes needed to build the knowledge economy,” a FWD.US spokesperson said at the time. “It’s interesting, you know,” Zuckerberg himself said, in a typically Silicon Valley moment of self-aggrandisement. “It’s kind of crazy to think that nothing like that has been done before. It’s a novel structure. There’s some kinks to work out.”

It was only “novel” because as far as I can see nobody had been so openly, brazenly unprincipled before. Zuckerberg was actively playing to both sides, regardless of the impact on the world outside. This wasn’t “pro-knowledge”; most people reckon he was trying to reduce his company’s overheads. “This is politics, Facebook-style: pandering as personalised as your Facebook Newsfeed!,” Adrian Chen wrote at Gawker back then. “It’s also about as craven as Washington gets.”

Chen was right. But we might just be scratching the surface of how craven Silicon Valley can get when given a chance. A man who’s built a gargantuan fortune on treating humans as products, who openly plays both sides not for the sake of progress or even compromise but just for the sake of corporate growth, should not be considered presidential material. Even with the bar this low. We shouldn’t have to find out how good he is at Risk to make that call. Alex Robert Ross is a staff writer for Huck. You can follow him on Twitter.  Enjoyed this article? Like Huck on Facebook or follow us on Twitter.

Linkedin
RELATED ARTICLES
OTHER ARTICLES
In the UK, Hongkongers are continuing to stand in solidarity with the pro-democracy movement.
Leading art critic Robert Storr reflects on the photographers – from Seydou Keïta, to Malick Sidibé, to Carrie Mae Weems – who helped to transform and redefine the medium.
Photographer Yan Morvan revisits a radical moment in history, which saw the emergence of a fiercely-rebellious spirit among the UK‘s youth.
The musician, DJ and founder of Monika Enterprise reflects on a career defined by revolution and rule-breaking.
While the popular news aggregation service has been kicked off Twitter, its demise does not spell the end of digestible misinformation.
Jermain Cikic reflects on his experience of visiting the island of Samos, Greece, in the summer of 2021.