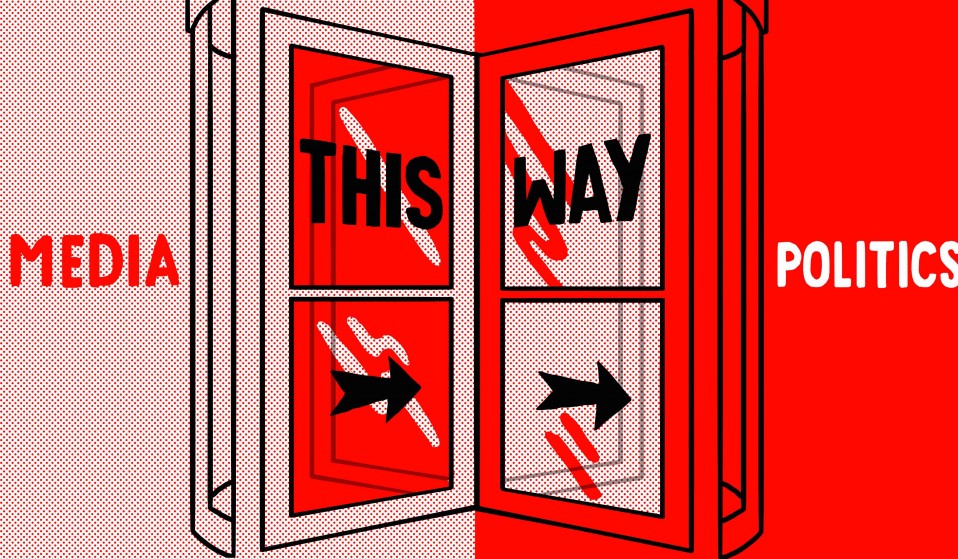 The mainstream media is attacking journalists and publications who are unapologetic in their political positions. It’s a tantrum that reeks of hypocrisy.

The mainstream media and professional commentators are attacking journalists and publications who are unapologetic in their political positions. It’s a tantrum that reeks of hypocrisy, writes Aaron Bastani.

The day before this year’s general election the Daily Mail printed 13 pages attacking the Labour leadership, “Apologists for Terror” adorning its front page above the faces of Jeremy Corbyn, John McDonnell and Diane Abbott. Within 48 hours it was clear that Labour had increased their share of the vote by 9.6%, more than in any election since 1945. In the process they forced a hung parliament.

That would not have happened without a monumental effort online. Video content created by Momentum, the group supportive of the Corbyn leadership, was seen by 30% of UK Facebook users. Meanwhile articles by media upstarts got more shares on social media than anything by traditional powerhouses such as The Sun or The Mail.

While new media, along with the offline mobilisation of Labour members and supporters, wasn’t enough to send Corbyn to Downing Street, it did prove decisive in denying the Tories a majority. What is more, its influence is only set to increase.

And just as the politics underpinning the Labour manifesto are disruptive to the established order, so too is this analogous media space – likewise previously dismissed as either irrelevant or bizarre. That is quickly changing, however, and over the last week newer outlets with a range of political views – Evolve, Novara Media, Another Angry Voice and Skwawkbox – have found themselves under attack, alongside the (comparatively) small number of unapologetically left-wing commentators in the British media.

It began with Nick Robinson, the BBC’s former political editor, who recently claimed these new outlets are waging a “guerrilla war” against the broadcaster to promote their own editorial agenda: “Our critics now see their attacks as a key part of their political strategy. In order to succeed they need to convince people not to believe the ‘news’.”

Robinson’s primary point, that newer outlets are bad for both politics and the journalistic profession, latently tethered itself to the Fake News meme that surrounded last year’s US Presidential Election. That was repeated in a piece by the Guardian’s John Harris published a few days ago titled, “If journalists take sides, who will speak truth to power?”

Harris made a robust defence for journalistic impartiality, and how it should be an independent sphere from politics in order to hold power to account. While such a contention is no doubt valuable, the inconsistency is glaring.

Sure, new media outlets must hold themselves to the highest levels of journalistic standards, but don’t be fooled into thinking the likes of Murdoch don’t have their own ideology and agenda, they’re just traditionally less keen on making that apparent.

Harris also attacked journalists and commentators who are upfront about their partisan politics: “The distinction between activism and journalism becomes dangerously blurred,” he writes.

There is of course the fact that Harris, somebody decrying journalists for ‘taking sides’, was allegedly part of the inner circle that advised Ed Miliband as Labour leader alongside Lord Glasman and Chuka Umunna.

The author of The Last Party: Britpop, Blair and the Demise of English Rock isn’t alone in this respect. Two Guardian columnists have associations with Bright Blue, a Tory thinktank. Matthew D’Ancona is its current chairman while Rafael Behr sat on its advisory board. Meanwhile Polly Toynbee was once a parliamentary candidate for the SDP in Lewisham East in 1983 (splitting the left vote and allowing the Tories to win the seat).

Lionel Barber, editor of the Financial Times, tweeted Harris’ article gleefully adding “MUST read on modern journalism, polarisation and speaking truth to power”. Barber’s own paper includes Janan Ganesh among its editorial staff, biographer of George Osborne and former staffer at the right-wing think tank Policy Exchange. Ganesh, who is paid for his opinions, memorably tweeted: “You can do analysis of Corbyn and his “movement” (I have done it) but the essence of the whole thing is that they are just thick as pigshit”. Truth to power.

Elsewhere, the former Chancellor, George Osborne, edits the Evening Standard, having replaced Sarah Sands – who now works at the Today Program with Nick Robinson. The first interview given to a British newspaper by President Trump was to The Times, with the interviewer being none other than Tory MP Michael Gove. Naturally, Rupert Murdoch was in the room. Meanwhile Daniel Finkelstein is an associate editor for that same paper while simultaneously sitting in the House of Lords as a Conservative peer.

Toby Helm, the political editor of the Observer – perhaps the biggest critic of the Corbyn leadership in the media – is the brother-in-law of Jonathan Powell, Tony Blair’s former chief-of-staff. Powell had the temerity to say to me, on the day after the General Election, that Corbyn should resign. This was after the party had just added 3.5 million votes to their 2015 total. Powell had form: in the 48 hours following the 2015 result he was at the forefront of a media blitz to create the narrative that Labour had lost because Ed Miliband had swung too far left.

Just this week, the New Statesman published an article critical of public ownership written by a lobbyist in the rail and energy industries. Incredibly he’d even written about Labour’s 2017 manifesto for them.

Robbie Gibb was the head of the BBC’s political team at Westminster, that was until he became the head of communications at 10 Downing Street at the start of the summer. Prior to working at the BBC Gibb had worked at Conservative Campaign Headquarters. His brother Nick is the Tory MP for Bognor Regis and Littlehampton

This fusion, between media and politics, is the totem of a rigged system. Trust in journalism is at historic lows precisely because people can see what is immediately obvious: the vast majority of the media isn’t impartial and those journalists that claim to be are almost all the result of an elite education. It is a club and there are rules. If you dare break them in politics you are deemed ‘unelectable’; transgress them in journalism and you are illegitimate.

And yet Harris has deemed the clearest threat to the integrity of British journalism as coming from those who, with so few resources, have sought to carve a space for counter-narratives in their work. “In the Facebook age, outlets that value the idea of dispassionate inquiry and dogged research are feeling the pinch, while a great ocean of polemic often written for nothing and barely interested in the world’s endless complexities, grows ever larger,” he asserts.

I’d argue the likes of John Harris and Nick Robinson are not so much worried about a media model in crisis – which, for better and worse, it is – as an ideological blueprint in free fall. It is this which runs through their clinically false equivalence between left and right; between the politics of a Jeremy Corbyn and a Donald Trump. Because centrism is a purely relational politics, and the boundaries of political acceptability are in flux they are lashing out.

There is nothing wrong with politically committed journalism, be it in comment or reportage, legacy media or new. The point is to be open and honest with one’s audience about those commitments.

Of critical importance is that none of us can escape ideology, the fatal conceit of the liberal mindset. It is ideology which makes socially contingent outcomes, political outcomes, seem inevitable and common sense. It is ideology which makes people think it is reasonable to own large homes while arguing against rent caps. Defending the present state of things, as establishment voices within mainstream media almost always do, is ideological.

The growing number of voices in the mainstream attacking new media, in both form and content, do so because they finally comprehend what is at hand: a revolution in power, and not just at the ballot box.

The coming decade will see major changes in politics and culture. How that is documented will be decided by a new generation of journalists – as well as those inside who know change is both inevitable and necessary. Yes, these new genres and organisations need rules and conventions and revenue models – but the truth is we are making them. Mouthing off about impartiality, and questioning legitimacy, looks like the gatekeepers throwing a tantrum. The gates are staying unlocked.

Linkedin
RELATED ARTICLES
OTHER ARTICLES
The action took place in response to the 200 asylum-seeking children who were placed in hotels run by the Home Office who have gone missing.
Following the release of his debut single, Deyaz talks battling addiction, dealing with his struggles through music, and building a budding music career from his living room.
As she gears up for the release of her first book, the 24-year-old climate activist talks standing up to authority and building a more inclusive movement.
Theo McInnes’s photos of the annual event provide an intriguing snapshot of contemporary Britain.
A new law change is enabling Britain’s donor-conceived children to know the truth about their origins – but campaigners say the fertility industry must do more to protect people.
Activists and campaigners are fighting back against new laws that would seriously undermine the ability to take industrial action, calling it an attack on fundamental workers' rights.