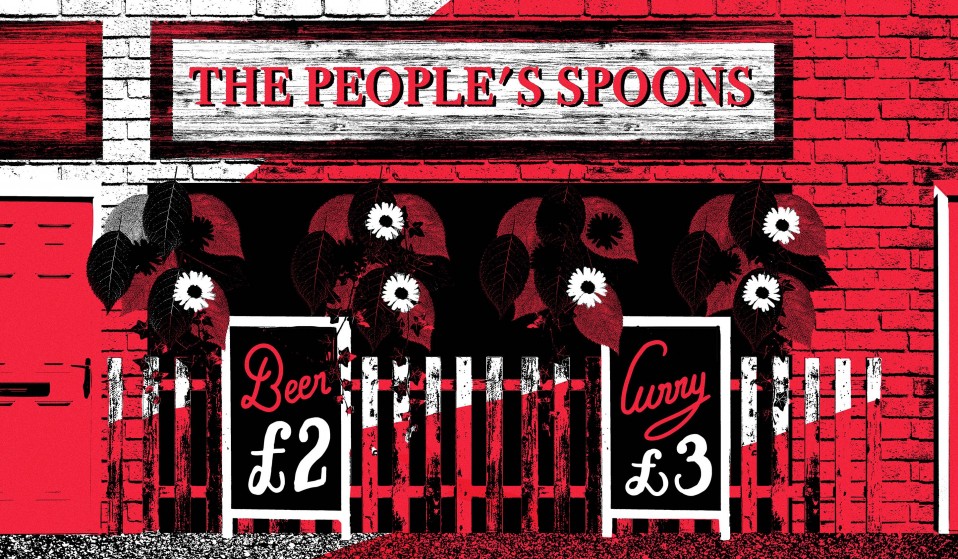 Cheaper pints, better pay for staff, and a social space not ruled over by market forces. All hail The People's Spoons.

Cheaper pints, better pay for staff, and a social space not ruled over by market forces. All hail The People's Spoons.

According to recent surveys, the British public want to see a sweeping programme of nationalisation in the United Kingdom, returning everything from Royal Mail to railways, water and electricity companies back into public ownership.

So, hapless internaut that I am, I waded into the deep waters of Twitter with a single question: between Uber, Greggs and Wetherspoons, what would we nationalise first? Before a last minute call to arms by the #NationaliseGreggs brigade, one answer far outstripped the others – that we should nationalise Wetherspoons as a matter of urgency.

Perhaps it was the sight of Labour MP Clive Lewis, at the closing party of ‘The World Transformed’, necking back a can of Red Stripe as hundreds of socialists egged him on with screams of CHUG! CHUG! Perhaps it’s the heady excitement of socialism’s return to Britian. Perhaps we’ve all just had one too many. But more and more people are enchanted by the idea of building a progressive society on an ale-sodden architecture of publicly-owned boozers. And far be it from me to deny the voice of the British people. It’s kind of a brilliant idea. Cheaper pints for punters, better pay for staff – and a social space that’s not solely ruled over by market forces.

The idea of a nationalised pub chain is far from new or outlandish. During WWI, the ‘Carlisle experiment’ saw pubs nationalised in a drive to create social spaces run by and catering for ordinary people. With their doors open for decades, these pubs emphasised the importance of games and music. They welcomed women and other undesirables of the time.

Left projects have long-attempted to ape this impulse, with organisations like London’s Common House or The Cowley Club in Brighton which have proved vital to supporting social movements. The problem being that you only go there if you’re already a signed-up socialist – not particularly helpful if you’re trying to build spaces capable of corralling punters outside your own unruly gang.

Nationalised pubs perform no such accidental ideological triage. Rather, they offer a collective practical education in the goods of public infrastructure; lessons we all learn via cheap drinks, decent food, good music, and the assurance that you won’t be turfed out on your heel because of your ethnicity, your housing status, your lack of disposable income, or anything else that can get you kicked out of an average pub. Lessons we learn by the prospect of bar work that actually offers decent pay and conditions; pulling pints and pouring shots in the pursuit of public service.

Nationalisation debates are haunted by a paranoiac memory of the drab monotony of soviet-style public services. But nationalising Spoons presents no such concerns – much of its appeal comes from that half-reassuring, half-drab uniformity we’ve learned to expect, to love, however adept the pubs are at chameleoning into their surroundings with hipster furnishings and folksy names like ‘The Bright Helm’ or ‘The Post & Telegraph’.

Wherever you are, you can expect suspiciously cheap burgers, cheap pints, and the ability to cream off the free wifi for hours undisturbed while embracing the joys of soggy chips and headache-inducing kaleidoscope carpets.

You’ll even find several named ‘Moon Under Water’, after Orwell’s misty-eyed vision of his perfect boozer – where no-nonsense barmaids call everyone ‘dear’ as they dole out jam roly-polies and stout in china mugs.

Orwell’s pub is seen a bastion of romanticised working-class culture under attack from such modern vices as mock-tudor architecture and metropolitan anonymity. But lodged in the heart of his fusty utopianism is a genuinely radical impulse: “The garden is [the pub’s] best feature, because it allows whole families to go there instead of Mum having to stay at home and mind the baby while Dad goes out alone”. His dream pub is a space where everyone can mingle; ‘pub’, we are reminded, is short for ‘public house’.

People with progressive politics of all stripes have long emphasised the importance of ‘social infrastructure’; the need to build spaces where people can meet, plan, discuss, forge the sense of commonality necessary to getting our collective arse in gear to change things. An antidote to the twin evils of privatisation and social isolation which chip away at our ability to build a sense of ‘us’.

In this effort, Spoon’s ubiquity and merciful lack of brand ‘philosophy’ is uniquely appealing; here, pretty much anyone can be part of that ‘us’. From packs of braying city boys in chino-and-boat-shoe combos, to parents with toddlers in tow, to the man at an old North London haunt of mine affectionately known as ‘The Growler’ who just stood at the bar and conversationally growled at passers by. It seemed to make him happy.

As its popularity swells to cult levels, bolstered by the paradoxical force of its own mundanity, spoons has become the reliable refuge of the stuck-out and the broke and the fun-hungry. In short, a proxy for the public space.

And if we ever needed the crutch of such a surrogate, it’s now. Youth centres and libraries and swimming pools are shutting up shop. Cities are being taken over by a slow creep of ‘publicly owned private space’ initiatives, where councils chuck more land into the yammering jaws of private development companies.  These are chewed into pristine nightmares of brushed steel, frocked with ‘hostile architecture’ designed to keep out rough sleepers, and patrolled by brutish private security guards.

Then again, the prospect of a national takeover is unlikely to delight on the company’s owner and founder – frothing Brexiteer Tim Martin, heady on the mythos of his own capitalist success that turned a 1979 takeover of a single Muswell Hill pub into a £750 million fortune.

Really, there are two Spoons; the Spoons of public affection and the neoliberal behemoth, which, while it may reserve an easy-going attitude for its clientele, seems to impose on its staff a petty Taylorism that’s enough to drive anyone to distraction.

Former employees tell me that “work is highly regimented”; middle management  Apparently henpeck staff with endless micro-managerial questions: have you filled the correctly-branded pint to 95%? Do you know at least three facts about at least ten regulars? Have you asked people about their food exactly five minutes after serving? One tells me breaks are staggered, with the result that time for employees to interact with each other is limited.

This is a working life familiar to millions of Britons; conditions of miserly surveillance held barely in check by existing employment protections. and while Martin may have salivated at the idea of a Brexit and its supposed cutting of red tape, it would only put workers’ rights further at risk. Put all that together and, to me, it’s no surprise that people are keen to wrench control of such spaces from the sweaty grasp of a Europhobic millionaire who took away our Sunday roasts.

Linkedin
RELATED ARTICLES
OTHER ARTICLES
David 'Dee' Delgado’s photo project is about honouring and uplifting the city of his youth, and a world rapidly disappearing under the relentless onslaught of gentrification.
After a two-year hiatus and a new album, the Nigerian artist is riding high. Now, he wants to bring his alternative, genre-bending sound to the world.
The first-generation graffiti artist reflects on the tagging’s emergence as an art form and the players who pushed the medium forward.
Taking us through one of the most dynamic years in recent history, Laylah Amatullah Barrayn new photo book contains tender yet confrontational portraits.
A group of aid workers face prison for helping to save people fleeing their homes at sea. If they are charged, it will have a chilling effect on humanitarian efforts.
A new law change is enabling Britain’s donor-conceived children to know the truth about their origins – but campaigners say the fertility industry must do more to protect people.