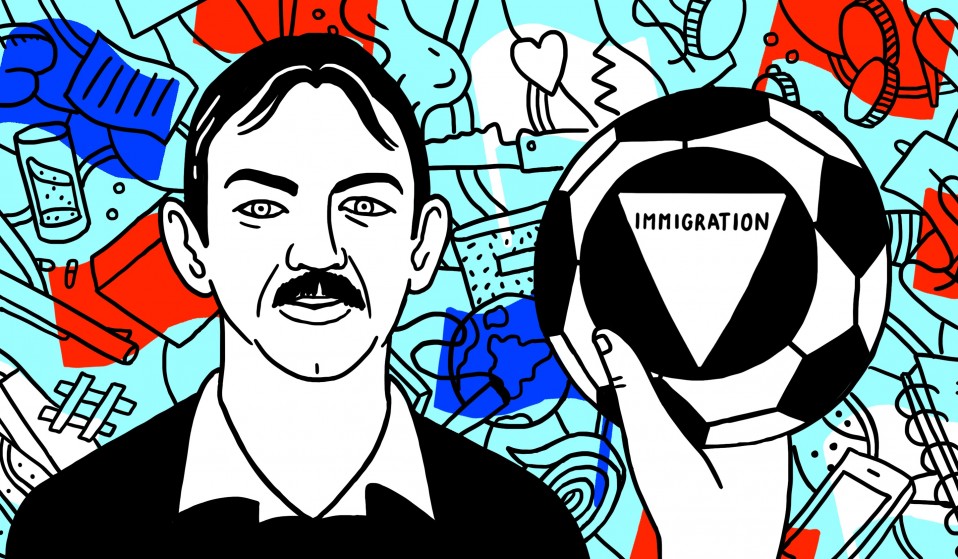 Footballing legend and Twitter sensation Neville Southall takes on the biggest issues of our time. This week it's immigration, and the need for humanity.

In his column 'Neville Knows Best', footballing legend turned Twitter sensation Neville Southall takes on the biggest issues of our time. This week he turns to immigration, and a system that is lacking humanity, accompanied by an original poem.

Imagine looking out of your window and seeing bombs falling all around you. You have a wife and three children, and the war has been raging for months. There is hardly any food or water, and if you stay it is only a matter of time before one of you might be killed. What should you do: stay and risk death or move on away from the war torn areas? I think most people, including you or I, would opt to move on. But where do you move to? The next town? The next city? The next country?

War, famine, disaster, prejudice has devastated your home country – your house will be ransacked and occupied by others, you will be attacked, hungry or lose everything. The only sure move is to the next country, but it too is struggling, so you decide that you need to get to Great Britain where you feel all your family could have a good future and be safe.

The problem with this option is that you need to cross four or five countries to get to the port of Calais, so the long and dangerous journey begins. Each country you enter does not want you there and move you on quickly. If you are wealthy you buy your passage with money, if you are not the journey is a massive struggle. There are plenty of people waiting to take anything they can from you, to exploit you and your situation.

How is it possible to protect your loved ones who travel with you? Do you stick together, join up with others for protection in numbers, or inform the authorities and ask for help? Some of these may work for you.

As desperation sinks in you might will pay your last penny to move on quickly and keep your family safe, exorbitant fees are demanded. Even then you still end up in France, living in a hostile environment, in a country that does not want you there either. Applying for legal entry into Britain can take months, even years, and all this time living conditions are horrendous, criminal gangs infiltrate and prey on all the camps. Even then, you might get rejected.

Some members of your family may well have been children when you started this journey, but as time creeps on they have turned eighteen and are now classed as adults in their own right. This means they have to apply separately to enter Britain. For some this means leaving children behind and splitting the family up, half of you make it to Britain and some are left in the camps.

Time passes and frustrations grow, the son you have left behind decides to take matters into his own hands and tries to smuggle himself into the country “illegally” on any type of transport he can find, they he’ll try night after night after night and some will eventually succeed. Others will be hurt or worse, and never make it.

The family is back together again now, buw with a son who is deemed an “illegal immigrant”. That same day a French IT consultant has landed their dream job in London, and so moves nine family members over with with no problems at all. The family fleeing their war torn country are stuck, regardless of their skills, experiences or history. Is this the type of immigration system we want??

What would I do if I was a dad in a war torn country: stay and risk the lives of my family or move on? The answer is I would move on, I would do anything to keep my family safe. You would do the same.

So, should we stop the current immigration system now entirely? For me the answer is ‘YES’ – which might surprise you – and this is why.

I would like there to be an amnesty for anyone who is currently thought of to be in this country “illegally”, aside from people who have committed horrible crimes and are hiding or haven’t been brought to justice. I would give everyone twelve months to come forward and start the legal process of becoming a British citizen. Everyone who came forward would be supported in making it happen. Then these people could become members of communities, contribute to society, and build their lives.

In conjunction with this, instead of spending £12 million on a fence to contain immigrants in Calais, that money should be used to provide support for people still stuck on the border: food, water and schooling is vitally needed for those still living (more like surviving) in Calais. This would help those people already there, but also any new arrivals.

There would be an amnesty, nobody would be called “illegal”, and then we could finally start again. We could have a fairer system, one that ensures people are treated fairly. Let’s start with a clean sheet back at the beginning. We need to get the public to realise the benefits of immigration. Our NHS would not survive without it, for instance. Immigration can bring new ideas, new skills, new cultures, new understanding and renewed tolerance.

Why are politicians scared to talk about immigration? Are they scared of losing votes rather than doing what is right for the country as a whole? Would our Premier League be the same without  foreign players? I doubt it. There needs to be a grown up debate between politicians and the public about immigration. One that is honest and open, where we think of people as people and not as statistics or problems.

This is an original poem.

My breath seems foreign.
Swallowed by the thick air of this urban sprawl.
My desire to survive feels plunderous.
Suspicion at every bend.
Words struggle from my lips.
My mother tongue fights to betray me.
The longing for acceptance fires me forward.
To thrive is a battle I’ll win.

Linkedin
RELATED ARTICLES
OTHER ARTICLES
From the Yakuza to a biker gang, Bruce Gilden recounts capturing Tokyo and Osaka in the ‘90s.
Over the weekend, London locals came together to resist a pre-planned police raid targeting delivery drivers.
Our new magazine is here, starring the inimitable Mitski. Order your copy now and join us on a trip around the world.
The situation in Afghanistan remains dire, with many groups facing persecution at the hands of the Taliban.
In the last of our dispatches from OFFF Barcelona, Rufus Deuchler and Vincent Gault discuss the future of creative process.
The government’s failure to take long Covid seriously has led to the formation of a group campaigning for the thousands of forgotten victims of the illness.