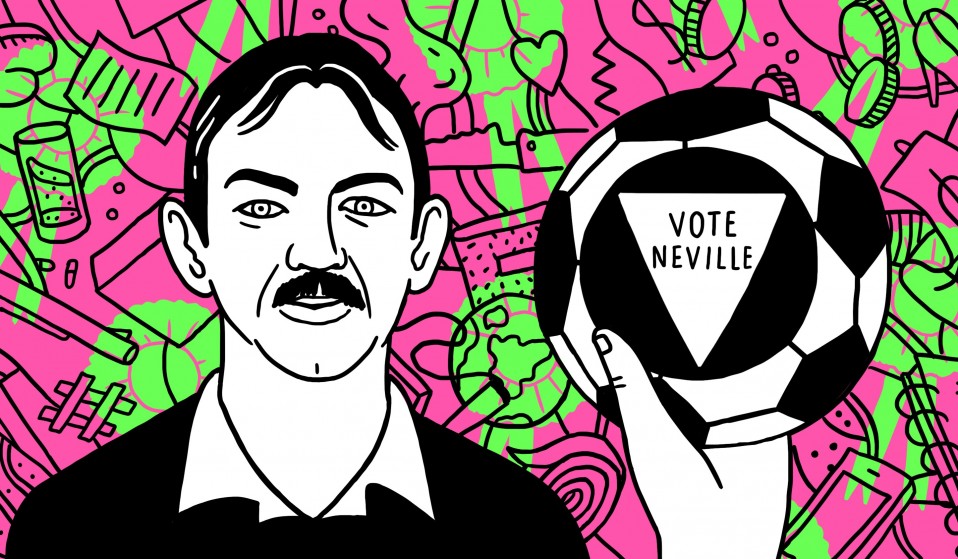 Footballing legend and Twitter sensation Neville Southall takes on the biggest issues of our time. This week, he sets out what he'd do as Prime Minister.

In his column 'Neville Knows Best', footballing legend turned Twitter sensation Neville Southall takes on the biggest issues of our time. This week he presents his manifesto for Britain, and lets us know what he'll do when (not if) he is elected as Prime Minister.

When I become Prime Minister there are many things I will do. Great Britain is a great place to live, but everyone must respect it and all of us need to work hard to keep it great. Here I have set out some of the things I would do when I am in charge of the United Kingdom and elected to Downing Street.

More mental health units would be opened up, and these would be big enough to cope with demands.

There would be no more using police cells for mental health patients, whether adult or child.

The NHS would have proper security in hospitals to arrest anyone giving staff abuse. There would be zero tolerance, with fines or community punishments for anyone abusing staff, and their photos would be put on social media and in the papers.

Each hospital would be given enough money to run for a year, and in that time there would be an election process for every job sector in hospitals throughout Britain. I would have a representative from each sector on a central governing board, so a representative from the maintenance, physiotherapy, radiology, surgeon, nursing sectors etc.

Each representative will give an explanation of how to make improvements to that sector to the Health Minister, who will spend time within those sectors and see things first hand.

All new hospitals would be built on the same site as the new retail parks, and all the tax collected from all the new stores and restaurants would go directly to the local hospitals.

All new hospitals would have swimming pools, spas and gym and fitness rooms, and all the money made would go directly to the hospitals. I think it would be a good idea to have a Travelodge or Premier Inn type hotel as part of the hospital, again as a money making scheme.

We would have an NHS day, and celebrate it.

I want a discussion around assisted dying as well I think it will come into use in Great Britain.

There would be Suicide prevention teams across the country on standby to go to a person ASAP.

All sanitary products would be free.

GPs would work shorter hours but the surgery would have three shifts so everyone can get to doctors. The same for dentists and pharmacists.

Education would be looked at and again the teachers and TA’s would have representation along with other staff to provide answers to make it better for our kids.

Free school meals would be extended to keep a child in school at end of day to feed them.

We would have national service for 16 -19 year-olds. Here they would be trained to look after themselves, do fitness, plus any additional education needed before college, university or work.

Sex workers would have a representation in my government and I would decriminalise the sex trade.

I want the LGBTQ+ community to produce, through some kind of election process, a council. One of the council would be a representative in government.

We need firefighters to have representation in government, and we would again look to increase their pay to reflect what they do.

Every public sector worker would get proper pay, all trains would have at least one driver and two security people on board.

Care workers would get better pay and be given the time to spend at each home they care in, allowing them to give quality and adequate support.

Anyone caught driving under the influence of drugs would be sent to boot camp, then either rehab or community service for first offence, then prison, drugs ruin kids and I could not or would not sit back and do nothing about it.

There would be no road tax just tolls on roads.

Speed limit up to 80mph, except 20mph in all built up areas. If you break it then bootcamp.

There would be a zero tolerance drink drive level so drivers know there can no alcohol at all before getting into their car.

Anyone found without car insurance will go straight into boot camp and then decide what to do with them.

I want everyone to be able to go out at whatever time and be safe. I would increase the number of police and make sure they spent more time out of their cars.

I would introduce a boot camp.

There would be no more staying in the house due to gang threats or pure fear. I would make sure we dealt with crime but also have a system in place which allows us to get help and support to those who have addictions or mental health problems.

If a youth was found committing crimes he or she or they would be put in jail for a night, and then the parents or guardians would be brought in and they would all work together with a youth offending team to do proper community service.

If then a young person did not adhere to this they would be put into a boot camp for three months and the training would be tough but there would be education integrated too.

Prisons would have many officers and prisoners would have proper education and fitness work. Anyone with mental health issues would be put into a proper unit which can offer the help and support required.

There would be no foodbanks. Anyone who is struggling will be given tokens for food and drink in local shops not the big supermarkets, as their local shops would be accessible to them.

For the homeless we would use compulsory orders to claim disused buildings to house them, and then start college projects building one bed flats. Once we have enough sites built we can house them and roll out the same project for prisoners who have been released, who struggle to re-adjust to normal life.

We would also build houses for all the people in temporary accommodation, giving them a permanent base to call home.

Farmers would be paid to raise animals in natural way, not shut in pens all day.

Our fishing industry would have Navy patrol boats with them at all times.

Any animal cruelty would be boot camp then prison, no fines they don’t work!

All sports clubs would have to have a mental health officer and insurance would be invalid without it.

All Premier League clubs would have to put a million pounds into their local grassroots game so kids could play for free.

Each Saturday the Premiere League would highlight something important like NHS or homelessness by doing something like giving free tickets for them.

On rainbow laces day LGBTQ+ teams would play before games and at half time.

Leisure centres would be free to use again.

Immigration must be sorted out. I have set out my plans to do that already.

We would have an amnesty for people already here, and those who are at risk for an entire year.

Then we will know the real figures and see how many people and what criteria to use going forward etc.

Customs would need to be stepped up in terms of numbers of staff.

All businesses would pay a living wage, and the more people they employ the less tax they pay, a sort of reward system.

We need to attract more businesses into areas of high unemployment so I would have a no tax policy for new businesses during the first year of profit, as long as they had local people working for them.

Every new business would have to take on one apprentice.

Broadband providers would be fined for not providing the same standard service across all areas.

No business would pay a male more than a female.

Anyone who is fit enough to work but cannot find a job would work on special projects to help repair communities and old buildings for public use (paid, of course). They would do 9am – 4pm every week day and employers would come to offer them to fill any job vacancies they have.

Let us get the drug problem sorted out as well, I hate drugs so I would have zero tolerance of them until someone could convince me they are ok.

I would raise the age of alcohol consumption to 21, and the same for driving.

The elderly would have free bus travel and free rail travel.

I want the elderly to be involved in projects that either up-skill them or benefit young people as they have lots to share and the time to dedicate to it.

The Samaritans would have their own button on all new phones, red probably, allowing easy access for all those in need of urgent help, a sort of fast-dial service.

We must get rid of anything that cannot be recycled, if possible.

That is all for now.

Linkedin
RELATED ARTICLES
OTHER ARTICLES
The last few years have seen an increase in LGBTQ-led initiatives to feed the hungry, with many finding ways to stay afloat despite the challenges.
Thomas Hoepker‘s images taken during a road trip across America provide a searing social commentary about a divided country.
Yesterday queer activist group Lesbians and Gays support the Migrants staged a die-in at the Pride in London parade to protest the inclusion of police in the march reports Huck politics editor Ben Smoke.
50 years since its inception, and the campaign calling for recognition that capitalism depends on domestic labour is as pertinent as ever.
Proposals to introduce a minimum GCSE threshold for student loans will disproportionately affect those from marginalised backgrounds.
A new edition of a seminal book brings together iconic images of the band onstage in their full glory and backstage in moments of unguarded camaraderie.