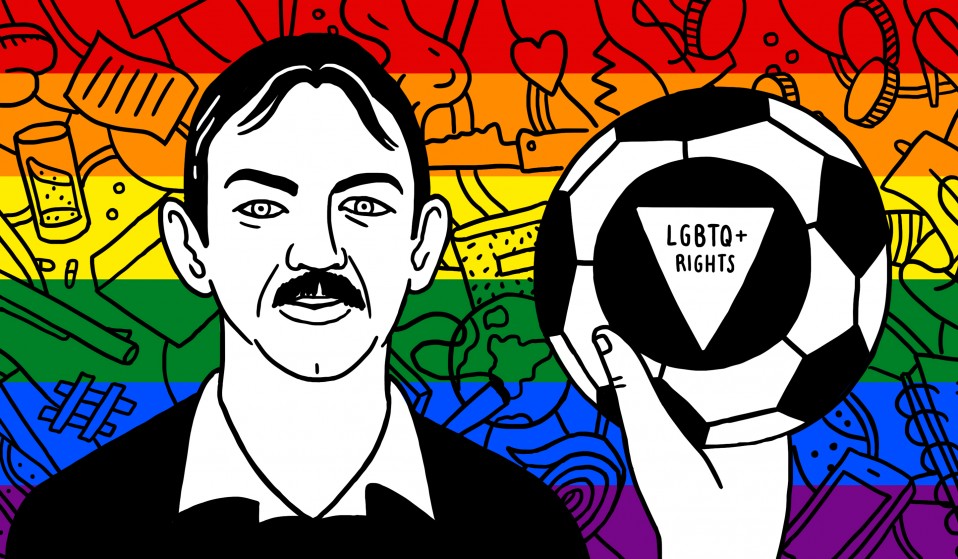 In his regular column, footballing legend turned Twitter sensation Neville Southall takes on the biggest issues of our time. This week it's LGBTQ+ rights and transphobia.

In his column 'Neville Knows Best', footballing legend turned Twitter sensation Neville Southall takes on the biggest issues of our time. This week he turns to look at the homophobia and transphobia that still permeates our society, and reflects on his own personal journey of understanding, accompanied by an original poem.

Most of you looking at who is writing on this subject may well dismiss me straight away. Ex-footballers have not been known for their tolerance or support of LGBTQ+ people.

I was brought up in a small town and had a very happy childhood with great parents and two brothers, none of whom are part of the LGBTQ+ community. Growing up I never heard or saw my parents or anyone else mention or indicate that someone was from the LGBTQ+ circle, so my exposure to it was basically nil.

In primary school there was no mention of sex or any associated issues, however when I got to secondary school there were a couple of lads who were labelled gay by their peers, and they got called all sorts of names. I am ashamed to say I was one of those who singled them out for name calling. Was I ignorant of their feelings and how it would affect them? The answer is yes. Why did I do it? I think I was very immature for my age and joined in because it was what all my mates did.

That is, of course, no excuse. I never understood what they went through, there was no educational input by schools and it was never addressed in school assembly as to what these poor lads were putting up with, they were never protected from this abuse. The culture I grew up in was vastly different to todays, I hope.

TV showed a lot of homophobic material, comedians made the LGBTQ+ community the butt of their jokes. This community was deemed different to us ‘normal’ people as if they had some sort of contagious disease that needed treatment by a doctor!

Once I left school I worked on a building site and for the council and then moved into the football arena, and in all these areas I never heard anything good about LGBTQ+ people.

I never came into contact with gay people knowingly, as far as I was aware same-sex relationships between women were a thing for men to watch. Bisexuals and transgender people were never talked about or discussed. Again we used words like ‘queer’ and ’faggot’, and again I am ashamed to say I used those words.

Looking back there must have been some gay or bisexual lads within my working community, but they never let on and I can see why. The clubs I was at never had any education or information about the LGBTQ+ community, and I am pretty sure it would have been swept under the carpet if anyone had decided to bring it up. There was no form of education on any of the FA courses I attended, and never any mention of the subject. Fans sang homophobic chants. No-one within the football industry had been trained to deal with the subject or it effects. It must have been pure hell for some people.

When I left football I drifted into the education system and again it was not a topic that was discussed. No training was provided. There was plenty about child protection, and you would think that both topics would have been dealt with.

As the years have gone by I have been privileged enough to meet many people who are gay and some of them now I am lucky to call good friends. It makes me look back at what I felt like at school.

I never thought about changing my sex, I was born a man in a man’s body. I told everyone that I wanted to be a footballer. Why? Because in my heart of hearts that is what I wanted to be. If I had been born a woman in a man’s body, and I told everyone I was a woman, I think I would have got a different response altogether and not a positive one. But if I knew that was what I was inside then what is the difference?

In fact, to be born a woman in man’s body is something that you know is true and real, to want to be a footballer is just a dream. When I said I wanted to be a footballer nobody thought I would or could, but nobody told me I couldn’t be or I wasn’t. Why do we tell trans women they cannot be women?

In this day and age we destroy dreams instead of making sure they come true. Why do we not trust our youngsters to make the right decision for themselves. It is time to work with the LGBTQ+ community and use their experiences to aid the decisions of others. Their experiences of growing up could help make sure that things are put in place to protect young people making these difficult decisions and give them an in depth knowledge and understanding of how others will perceive or treat them. They’ll learn how to be happy safe, which is all of our responsibility.

It seems to me that trans women get a raw end of the deal, talking to my trans women friends they find they are often abused physically and mentally. Some men seem to look at them as some sort of sex object to be used and abused, some people call them names and say they aren’t women when they are.

Trans women often can’t find employment as they face prejudice and there is little protection and support for trans people if or when they decide to medically transition which might mean they need to take time off for and for recovery. Too many trans women are living in a shell and under attack,  but they just want to be themselves. Surely we should respect the dangerous and difficult and sometimes traumatising journey they have had to go on and the abuse they have to face. These aren’t things you do out of choice, these are things that you do if you have to, if it’s who you are. These are brave people doing what they need to do.

Then comes the question nobody seems to be able to answer for me. What is a ‘woman’?  Those who work in the sport or insurance industry need to start looking at a definitive description of male and female. We need to ask the LGBTQ+ community to decide on their understanding of it and bring it to the table so there can begin an adult discussion. It should be as simple as that. These need to be agreed as young people are making their choices right now!  It will take years but let us be proactive not reactive. There doesn’t need to be abuse,  just conversation and understanding.

I can only judge the LGBTQ+ community on my dealings with them and all I can say is they have been fantastic with me and my constant questioning and probing. I now have new friends who I can call on for advice and guidance.I am 59-years-old and have been and am still being educated by the LGBTQ+ community for the first time. I was ignorant and closed to learning so I am grateful to them. We need to bring LGBTQ+ people and football closer together and that is my aim.

We should let people be themselves because that way they can have a chance to achieve their full potential, is that not what everyone wants?

This is an original poem.

I do not want your attention
The shouts of heraldry misplaced as I squint at the sun.
Now, now I hide in the dark
Waiting for empty pavements, I can exist.

Do you know how it feels to stalk the earth in vain?
To watch the rain and want to be the raindrops?
The only joy is knowing I am not alone in my exclusion.
I am part of a pack.
A misunderstood teeming line of souls.

One day though, I will have favour.
I shall have glory.
You and yours will bow.
Holding your wicked tongue.
Your unclenched fist signalling hope.

Linkedin
RELATED ARTICLES
OTHER ARTICLES
AI companies that develop image-generators using copyrighted artwork from the internet are coming under fire from artists who say that it amounts to theft.
At his West Bank restaurant, Fadi Kattan established himself as the voice of modern Palestinian cuisine. Now, he’s bringing his innovative, bold flavours to the UK’s capital.
Since 2007, Gideon Mendel has made 20 trips to document floods in 13 countries. The result is an alarming record of what has already been lost to the climate emergency.
A new exhibitions brings together the work of photographers who documented the deep unrest of these pivotal decades.
After building his reputation covering the US civil rights movement in the 1960s, the photographer went on to produce some of the most enduring images of the past century.
The action took place in response to the 200 asylum-seeking children who were placed in hotels run by the Home Office who have gone missing.