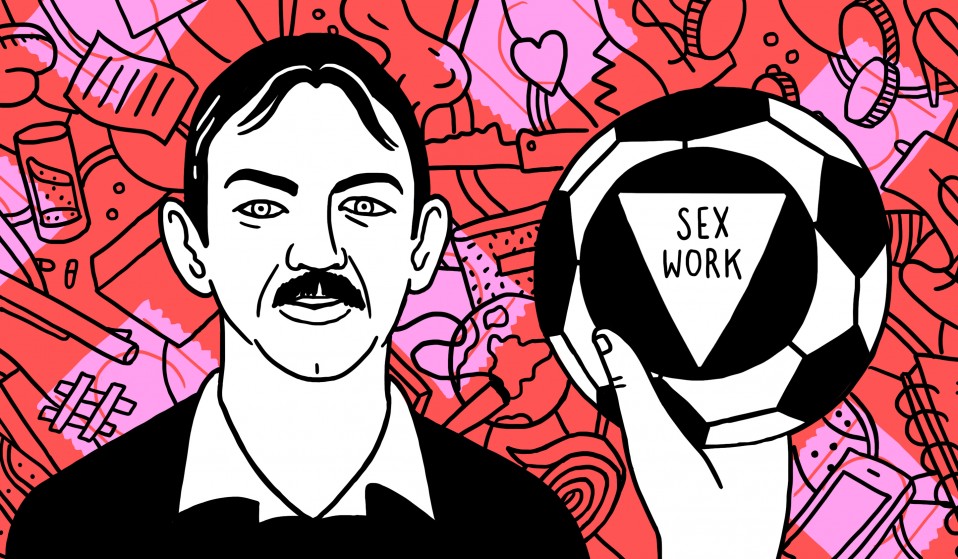 Footballing legend and Twitter sensation Neville Southall takes on the biggest issues of our time. This week he argues it's time to decriminalise sex work.

Footballing legend and Twitter sensation Neville Southall takes on the biggest issues of our time. This week it's sex work, and why it's time to decriminalise the oldest profession in the world.

When I say the word sex worker, what do you think about?

I imagine you’re thinking of street corners and people hiding in shadows. Visualising cars slowing down to stare at women, drug abuse, lots of violence and suppressed men and women with pimps controlling their every move.

There is some of that, obviously, but there are also those people who, in their eyes, have no choice but to make money from sex. Others say they actively make that choice on their own terms. Who are we to judge them? Unless we should ever find ourselves in their position, or feel as they do, we can never really know what we would do. If you have a family to feed, bills to pay, or a life to lead there is a lot of pressure to provide.

There are some who pay for university fees or put themselves through college using the money they earn from sex work, and also some who find it is a job that fits around bringing up their children. It really is the oldest profession in the world.

Right now in most of the United Kingdom, much of the sex industry remains criminalised. Soliciting in a public place is illegal, so too is kerb crawling and owning or managing a brothel. This forces sex workers our of sight and safety, and creates a stigma and shame that is hard to shake.

Do we really want to keep all these people hidden from society? We all know they are there, so why can we not just accept it is a real job and decriminalise it. People will say it is not a real job but I do think it is: they provide a service for which there are a lot of takers, if we are honest about it. If we decriminalise it we can support the workers by giving them the same rights as other working people, we can collect the tax and national insurance payments as in any other profession, and hopefully they will also get a state pension.

Another benefit would be the continuity of legalised and accessible healthcare. Surely then decriminalisation would see a drop in the associated violence and drug abuse?

If we were to decriminalise sex work, we’d need to think carefully about where it would be right to locate everything. We probably wouldn’t want lots of sex workers and their clients next door to a school. At the same time we wouldn’t want to place sex workers on the margins and fringes of our communities, because that will just lead to the stigma continuing.

But it’s actually quite simple: they need to have easy access to people and somewhere safe to work, somewhere that does not standout as an eye sore within the local community, but a place everyone knows as a designated area for the sex trade.

Sex workers could then, if they wanted, be registered and licensed, with health and safety guidelines for work (both for them and for their clients) as we have in many other industries. Those who work to feed a drug or alcohol habit would get benefits and support to get clean, and those struggling would be much more visible and therefore it would be easier to make sure they get what they need.

Anyone who wanted to run a brothel or club related to the sex trade would be scrutinised in exactly the same way as any other business operator: a stringent process covering all health and safety checks for the workers, premises, clients and the environment.

Many of us might think all people who use sex workers are desperate, hurting people, but there are lots of reasons why people might pay for sex. Let us look at a few. There are lonely people for who the company and communication is as or more important than the sex; the people who have partners or who are married but cannot have sex with them.

Do we deny them? And we have to remember every one likes sex a certain way and if a sex worker is only way and it is safe for both parties and everyone consents then what is wrong with that?

When I think of a sex worker I automatically think of a woman but obviously there are men and they must be treated equally.

It is funny that the governments have tried to sweep it under the carpet for centuries, considering almost every party has politicians who have had so called ‘scandalous’ relationships with sex workers. The hypocrisy is so clear. Why have none of them been brave enough to say ok let’s get together and do something for these people? Because it does not get votes! Well, now is the time to protect sex workers and their rights.

It would benefit all of us. It would give sex workers respect, an income, a safe place to work, employment rights, better heath so less money used by the NHS, more tax, more employment, maybe cut down on addiction and hopefully less violence too. A win-win situation for all.

Take away the shame, sex is the most natural thing in the world so why do we get so embarrassed and angry about it? It should be fun. It is time to talk about it openly and sensibly.

Linkedin
RELATED ARTICLES
OTHER ARTICLES
LGBTQ+ students are keeping the spirit of the original Pride alive by fighting for liberation for everyone, not just their community.
The overlooked story of Leicester’s inaugural Pride march is a reminder of the power of collective resistance in the face of far-right bigotry.
Freddie Miller’s new series of photographs investigates who today’s trainspotters are and what drives their unfettered enthusiasm.
50 years since its inception, and the campaign calling for recognition that capitalism depends on domestic labour is as pertinent as ever.
For decades, an area of East London has served as a community hub for Vietnamese people looking for a taste of home.
In the latest instalment of Photographers in Conversation, the chronicler of raves, protests and beyond explains why he’s drawn to such specifically visceral environments.